Here's the cult leader from a hero clix re-paint.
Posted by David at 8:57 PM No comments: 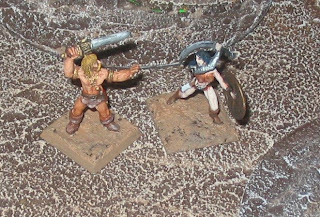 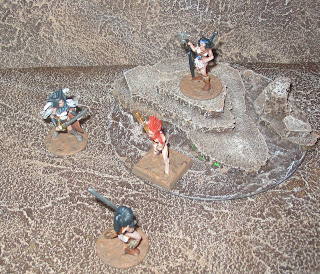 Remember, don't insult Amazons.
Posted by David at 10:03 AM No comments: 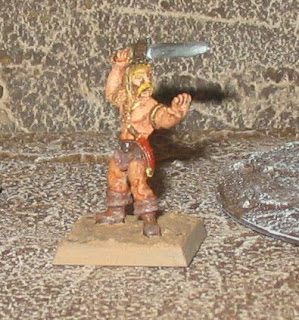 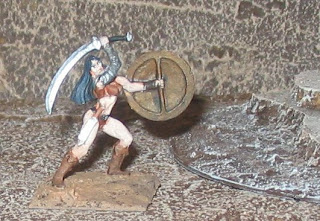 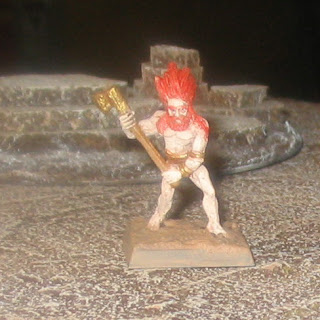 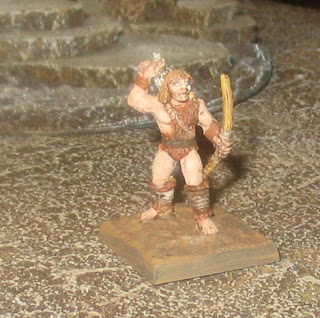 A group of Heroscape repaints to be used as a religious cult.
Posted by David at 9:50 AM No comments: 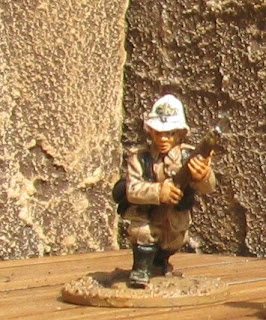 Boxer Rebellion German.
Posted by David at 10:44 AM No comments: 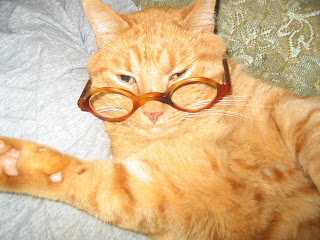 Asal, aka Pooch, thoughtfully contemplates nap-time.
Posted by David at 8:27 PM No comments:

"Fists" Fenlon, boxing sensation and all around tough guy, didn't want to be trapped in a distant galaxy with little hope of returning to earth, but that doesn't mean he'll let some despotic Prince push him around. His fate, however, seems intricately intertwined with that of Prince Thad, his diabolical enemy. Fate would have Fists save the life of his antagonist the Prince yet again. (The images are from a 3 game Fantastic Worlds mini-campaign using scenarios found in the rule book)

A Royal Banquet Celebrating Friendship with the Earthlings ends in tragedy when the King falls dead. Prince Thad blames that upstart Fenlon and sends the Palace Guard to arrest the humans. Meanwhile, Fists, Doc and Lita Prime search for clues to the King's murder. 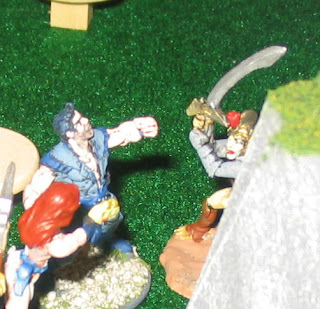 Prince Thad rushes to apprehend Lita, but Fists interjects his...fists. "Leave my gal alone!" he cries. Fists and Thad enter an epic struggle, bare hands against the Prince's finely honed blade. Fists deals out some punishment, but succumbs to the many nicks and cuts he takes in the process. He ignores the pain and forces himself to stay in the fight until Lita manages to over power the guardsmen and escape with Doc. Satisfied that his friends are safe, Fists crumples to the floor, a captive of Prince Thad! 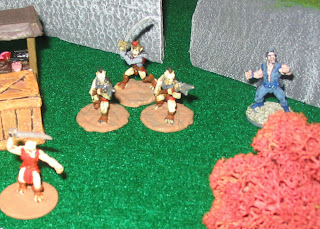 Prince Thad calls all the Senators together to proclaim himself King, and to charge Fenlon with the murder of his father. Suddenly, an assassin strikes! The poison dart intended for the Prince was intercepted by a Palace Guardsman, who dies a horrible death at the Prince's feet. The Captain of the Guard orders his guardsmen to surround the Prince to keep him safe. Meanwhile, Fenlon struggles with his bonds to free himself. A search of the garden turns out the assassin, a dreaded Reptillian bent upon bringing the Kingdom to it's knees. Unfortunately the assassin manages to escape before the full dread of the menace is discovered.

Nearby, the feared Reptillians have erected a portal gate and begin bringing their soldiers through. In the first wave comes the dreaded Reptoid beast, image of nightmare all throughout the Galaxy. 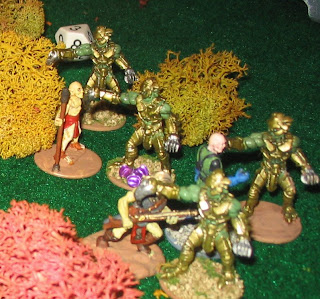 Soon their differences are forgotten as they fight, shoulder to shoulder to the gate. "We must destroy the Portal," yells Doc as he directs Lita and the Captain of the Guard to target the gate with their powerful energy weapons. 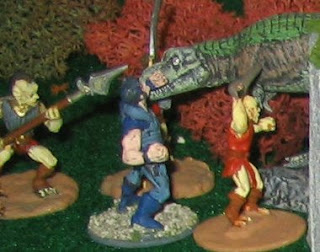 Meanwhile, Prince Thad and his Guard attack the dreaded Reptoid. The beast snatches up Prince Thad's arm in it's powerful jaws. The Prince screams in agony but bravely fights on. Fists runs over to the rescue, landing a powerful blow to the beast's snout. "Don't worry, I'll save you Thad," he yells through gritted teeth. The Reptoid stubbornly holds on to Prince Thad while Fists lands punch after powerful punch. Meanwhile, the blast of energy fire stops abruptly as the gate blows apart in a brilliant flash. The Kingdom, and Prince Thad, have been saved in no small part by the human interlopers, but Thad's ire is hard to die. So, while Prince Thad recovers and awaits his coronation, Fists and his friends borrow the Royal rocket ship and make their escape.
Posted by David at 4:13 PM No comments: