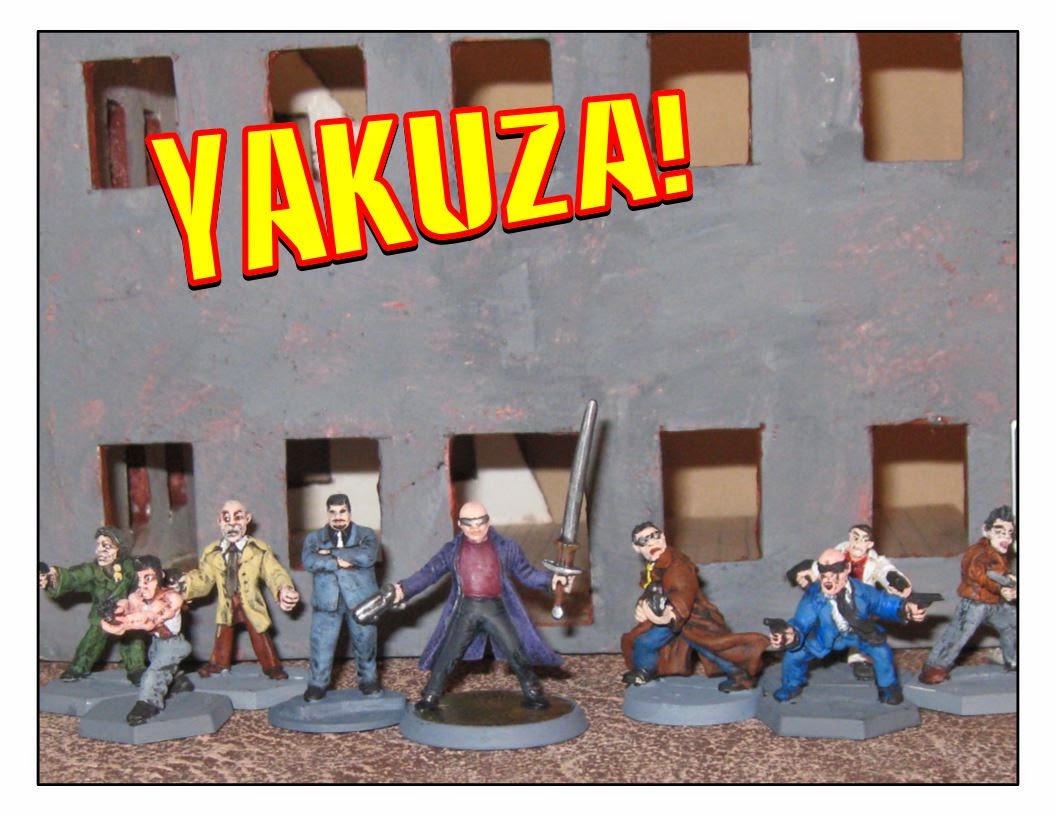 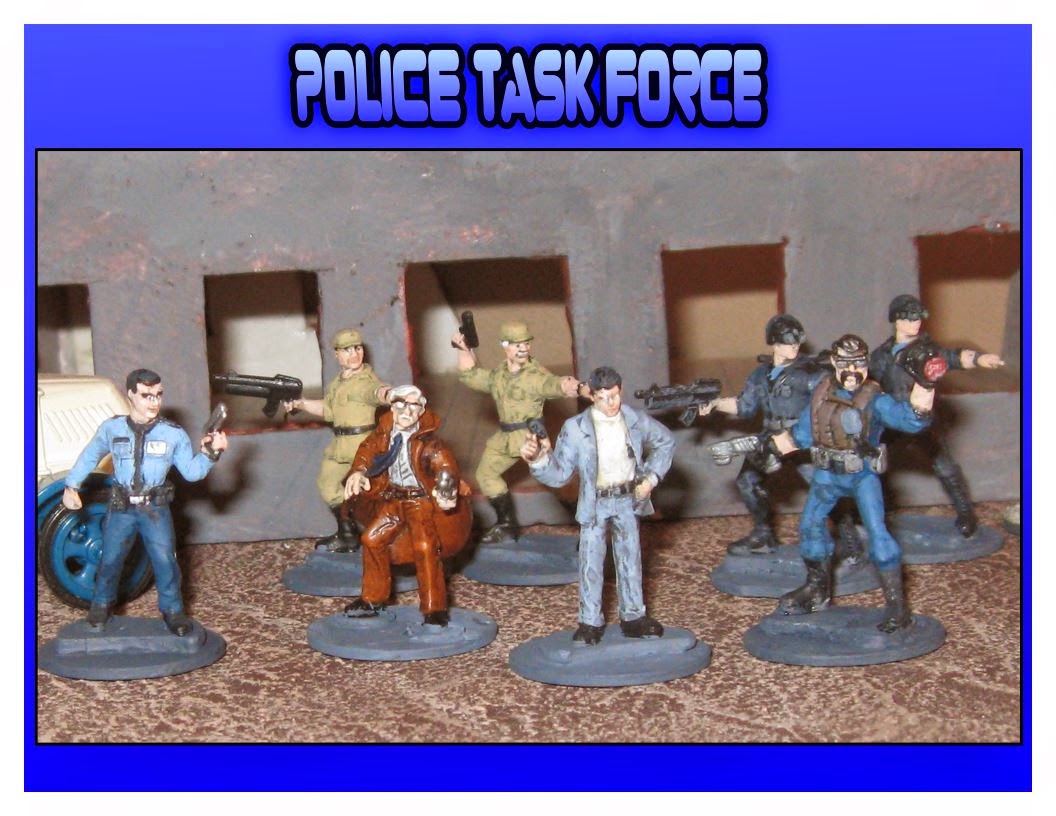 I am getting ready to play my first game using the new A Fistful of Kungfu rules from Osprey and Ganesha games, and so I wanted to give it a test run.  I played out a mini scenario to test out some of the game's mechanics and to see if it had that one-guy-takes-down-an-army type feel common in martial arts films.  To do so I took the hero of my Police Task Force, Special Agent Chan, against 5 Yakuza soldiers.  In terms of point value, the Yakuza have the advantage, yet Chan is a Protagonist with better stats and the ability to react when an enemy misses an activation.  The Yakuza are all extras, and thus don't have much in the way of special rules.

The scene:  Special Agent Chan enters a bar looking for a suspect.  A silence falls on the 5 tough looking patrons as, one by one, they all turn to stare at him. 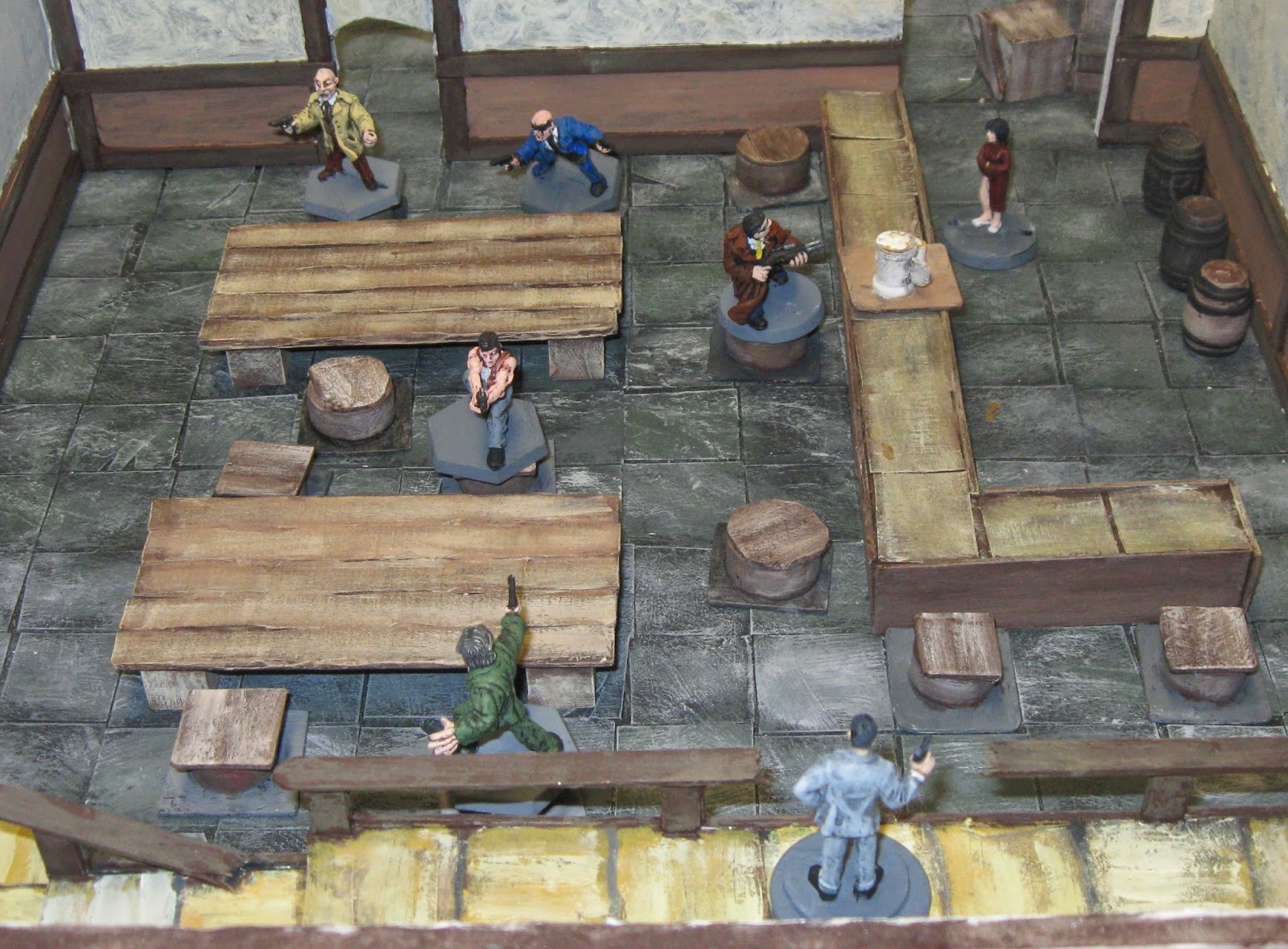 Chan surveys his opponents from the upper landing. 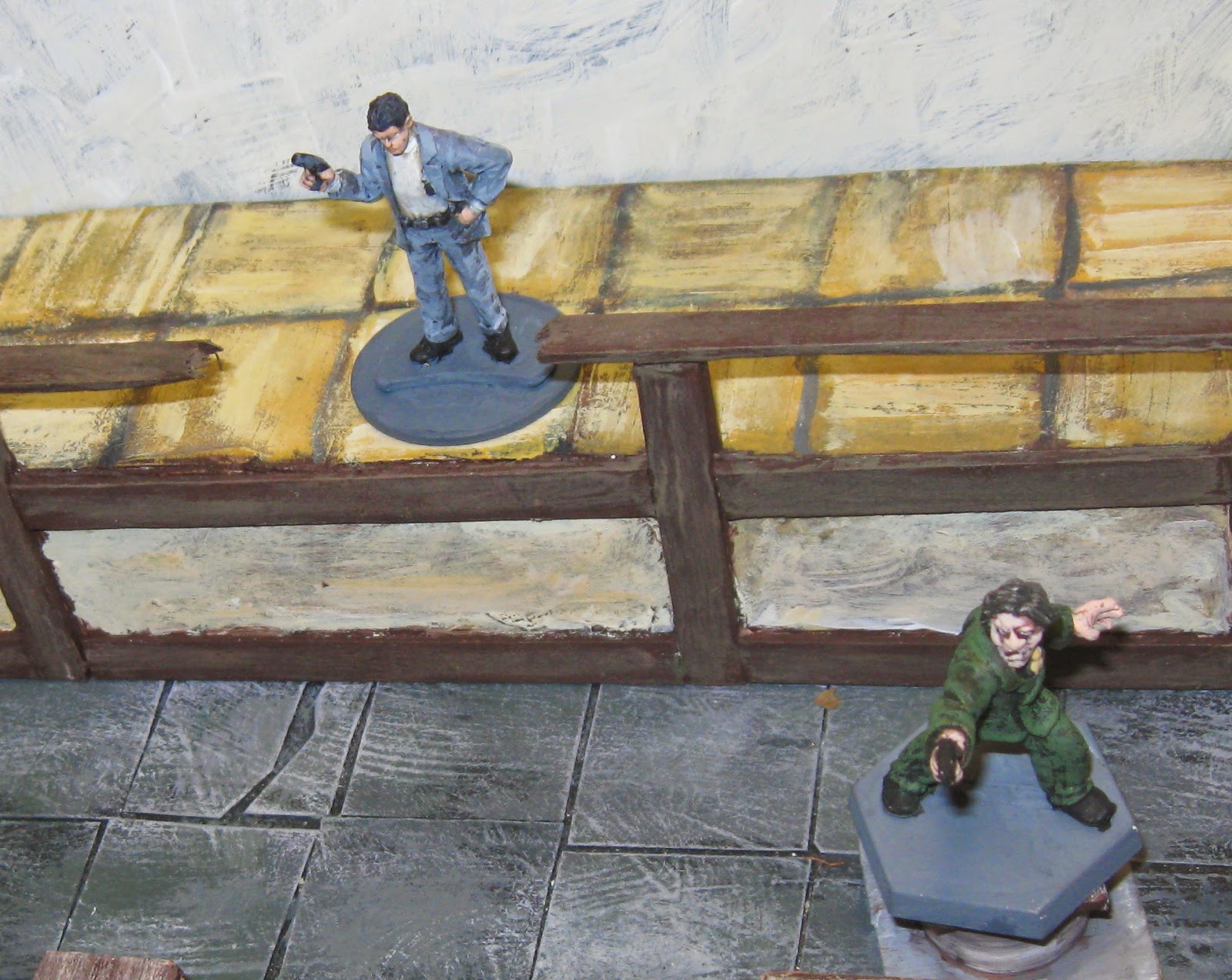 Green Suit yells cop and goes for his gun.  (In game terms the Yakuza go first and attempt to active Green Suit with 2 activations, however a failure is rolled on both). 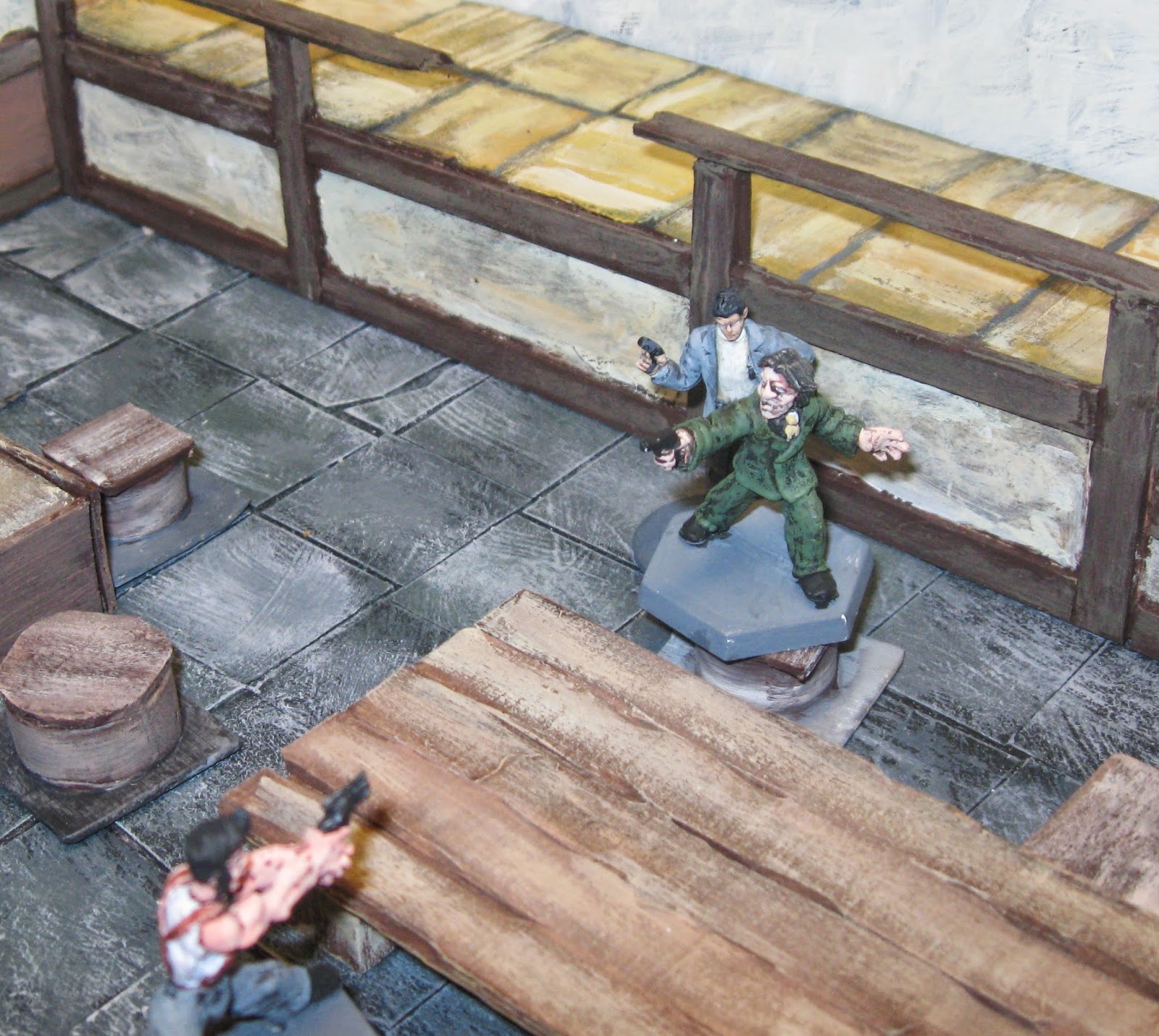 Chan leaps from the landing and catches Green Suit's hand as it pulls out the gun.  With a deft twist Chan flips the thug through the air. (Chan rolled for 2 reactions in response to the failures by the Yakuza.  His reactions are to move then attack Green Suit with the Eagle Claw trait). 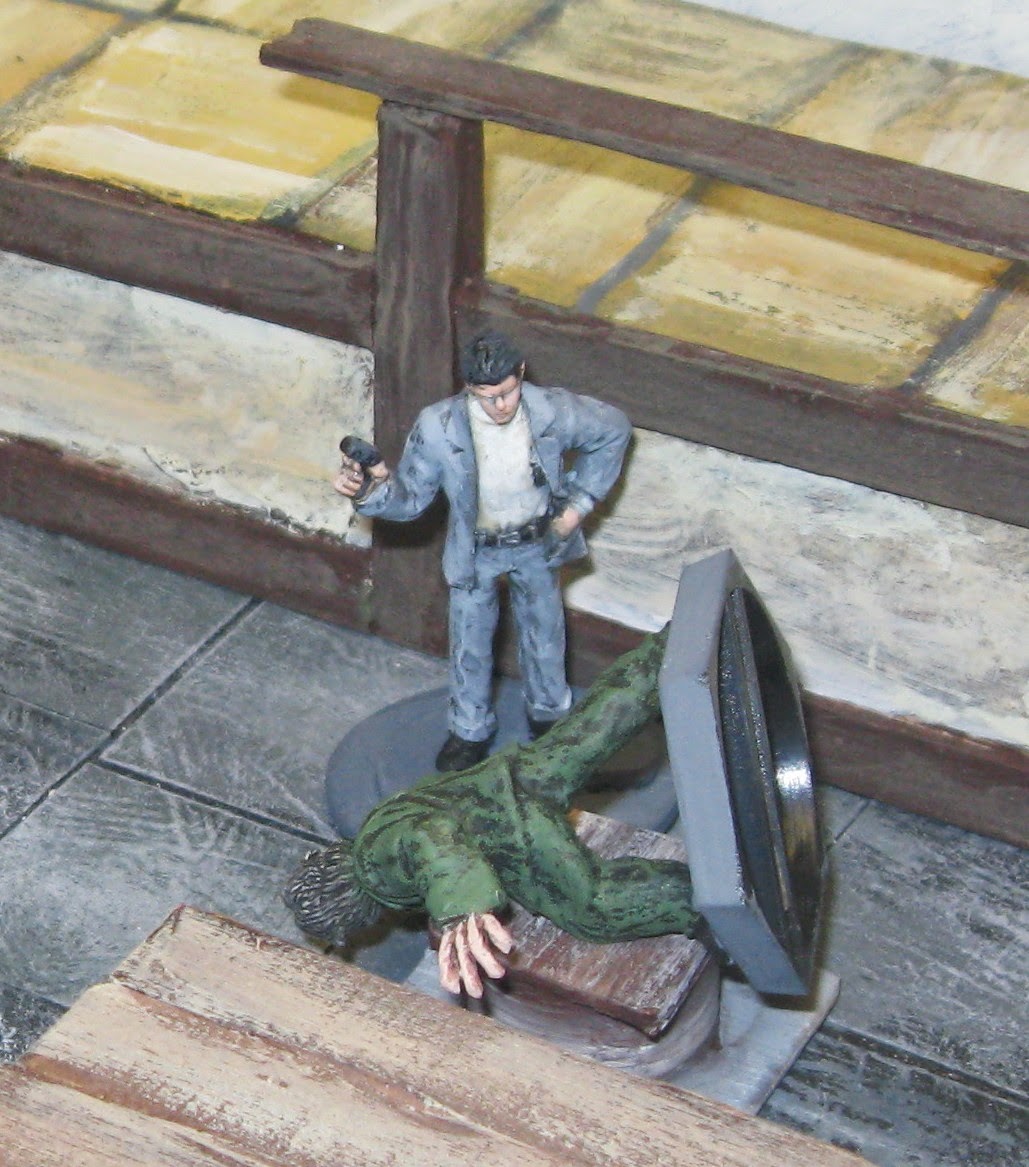 As Green Suit's head hits the floor Chan twists the thug's arms behind him and secures his wrists with a zip strip.  (Since Chan has the Handcuffs ability he can secure a knocked down or grappled opponent). 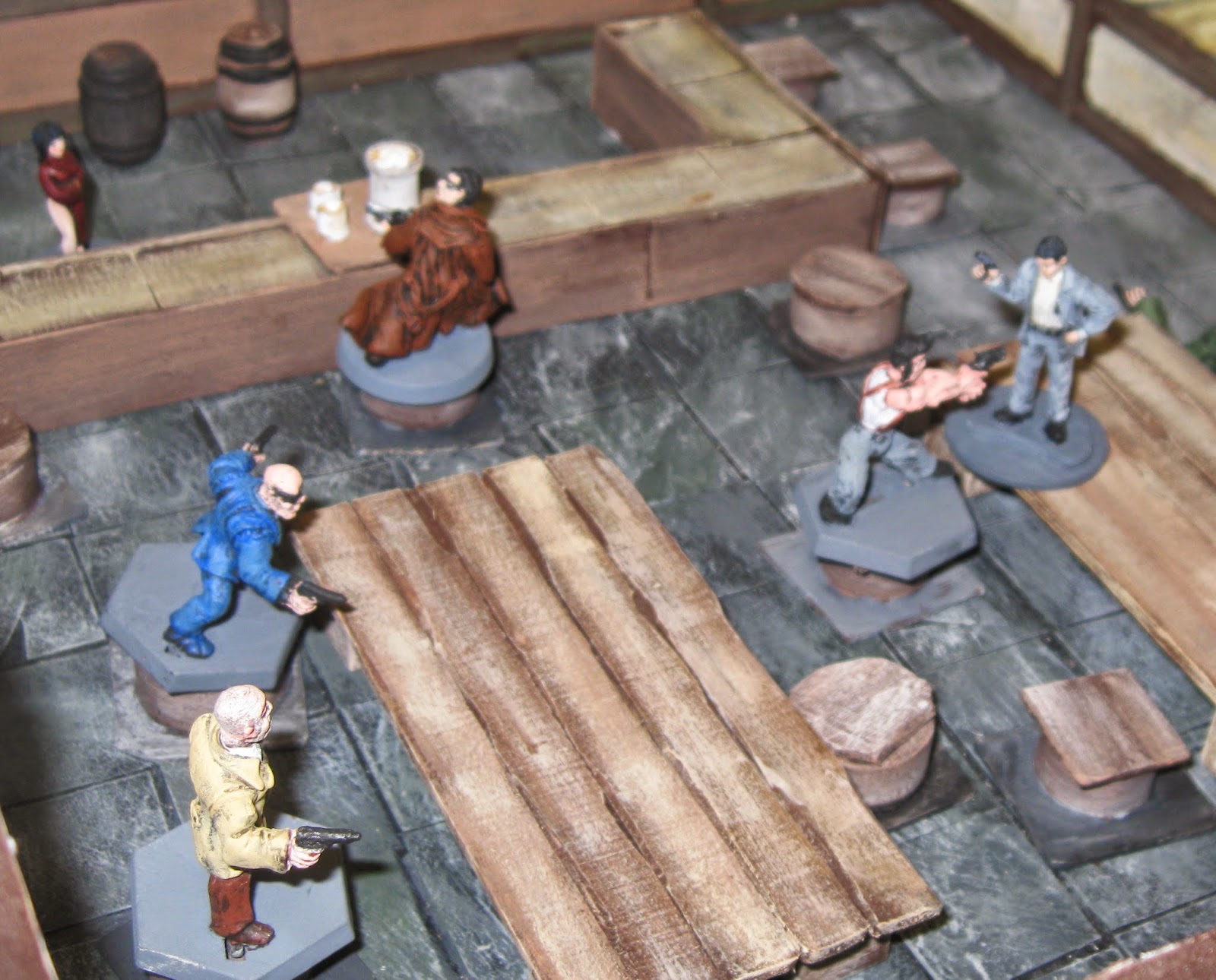 The other Yakuza dazedly look on as Chan jumps up on a table right in front of Muscle Shirt.  (It is now Chan's turn and he rolls for 3 activations and makes them all.  His first action is a move action). 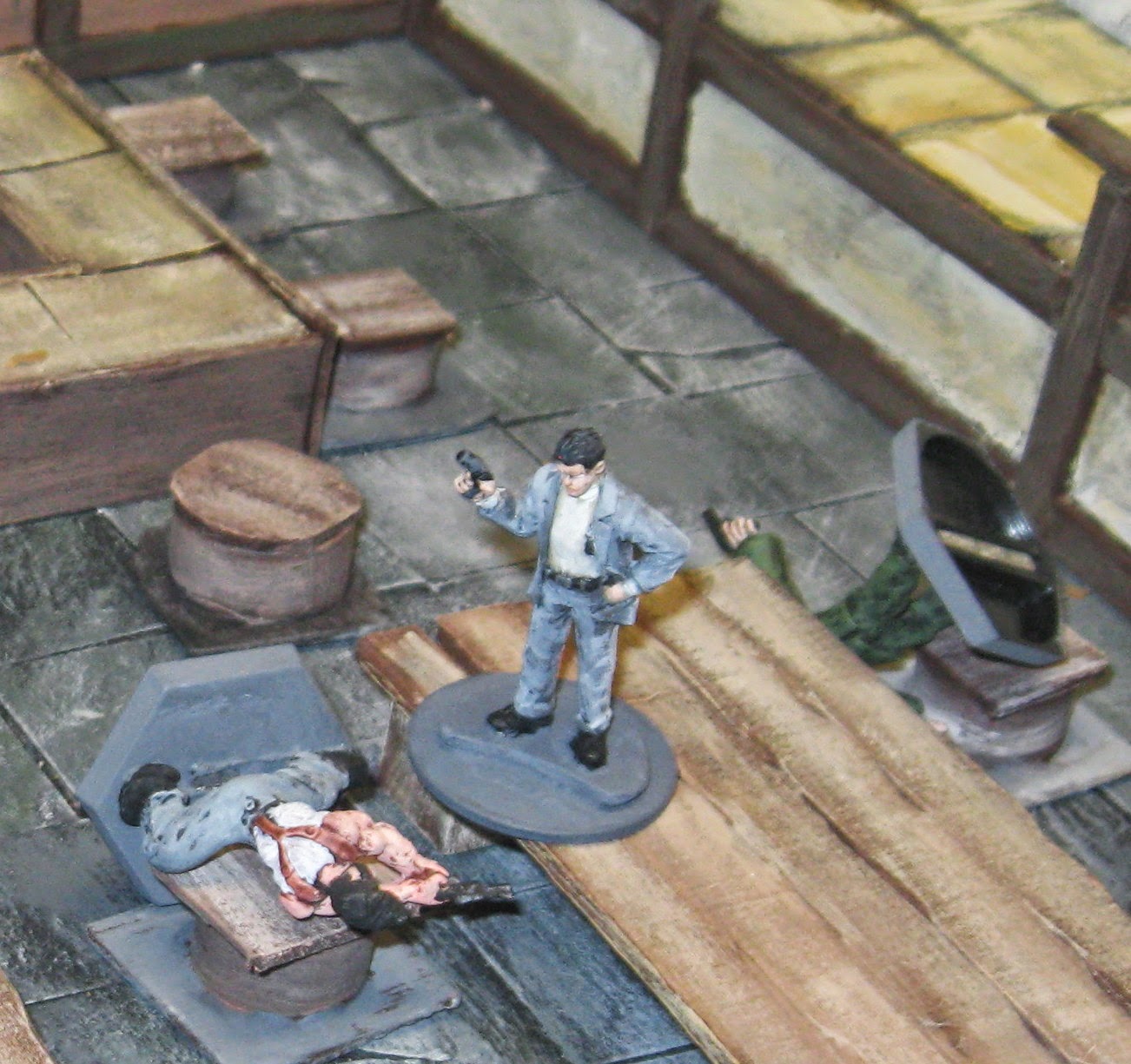 As Muscle Shirt tries to stand, Special Agent Chan reaches down and pulls his feet out from under him.  The thug falls and hits his head on the chair, and Chan secures his wrists as well.  (Chan again uses Eagle Claw and is able to knock the thug down and cuff him). 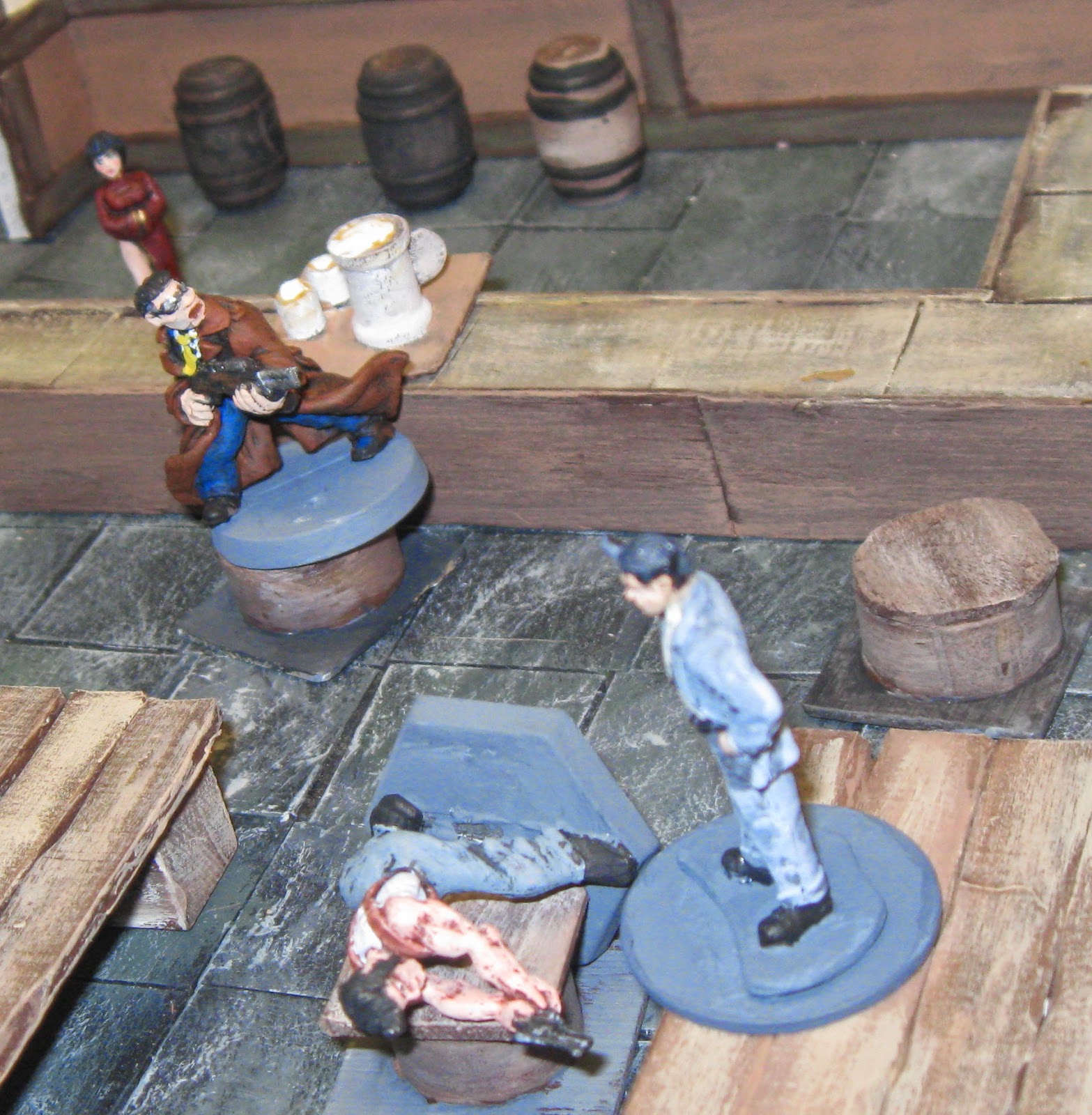 Chan notes that the thug at the bar has a shotgun under his long coat.  Not taking any chances, he quickly draws his pistol and fires.  (Chan uses the last of his 3 activations to shoot, drawing his pistol was a free action). 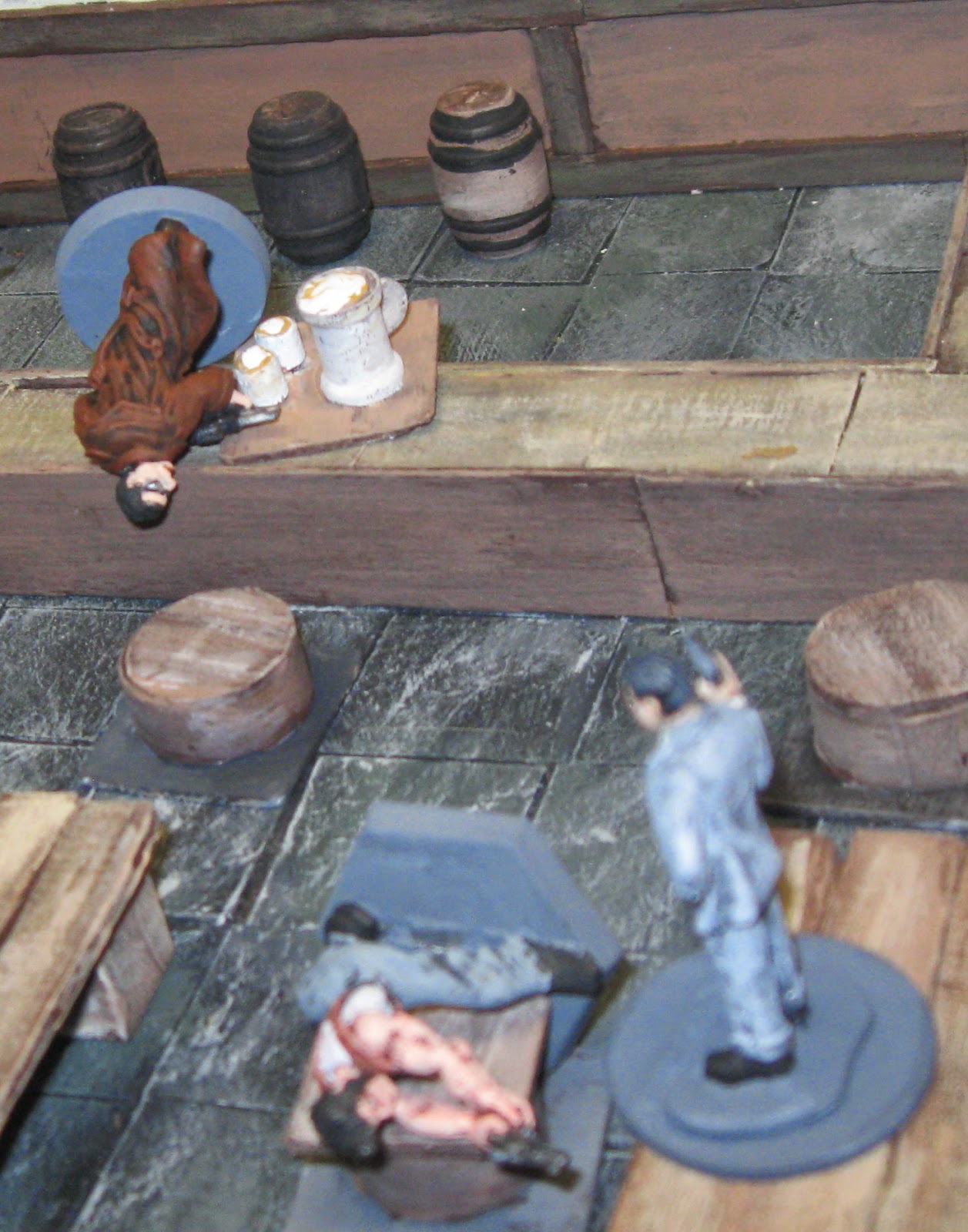 The thug bodily twists around as the slug hits him and sends him flying to drape across the bar.  (The results of this successful attack could be anything from killed to disarmed, depending on what the attacker chooses). 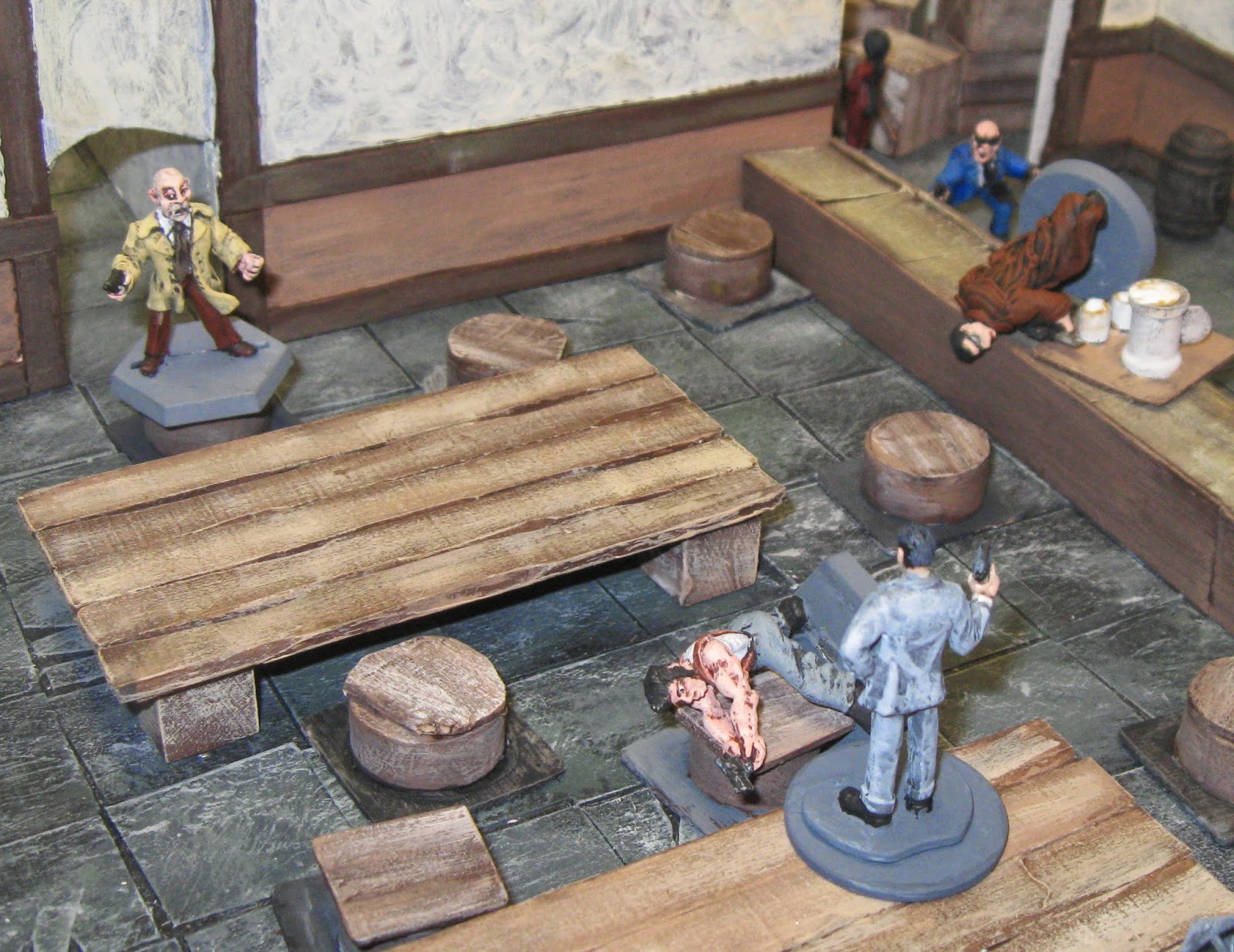 Two Yakuza remain upright and in the fight.  Two guns dives over the bar for cover and comes up shooting.  (It is now the Yakuza's turn and Two guns rolled 2 activations.  He has move and fire, so he takes no negative for shooting on the move). 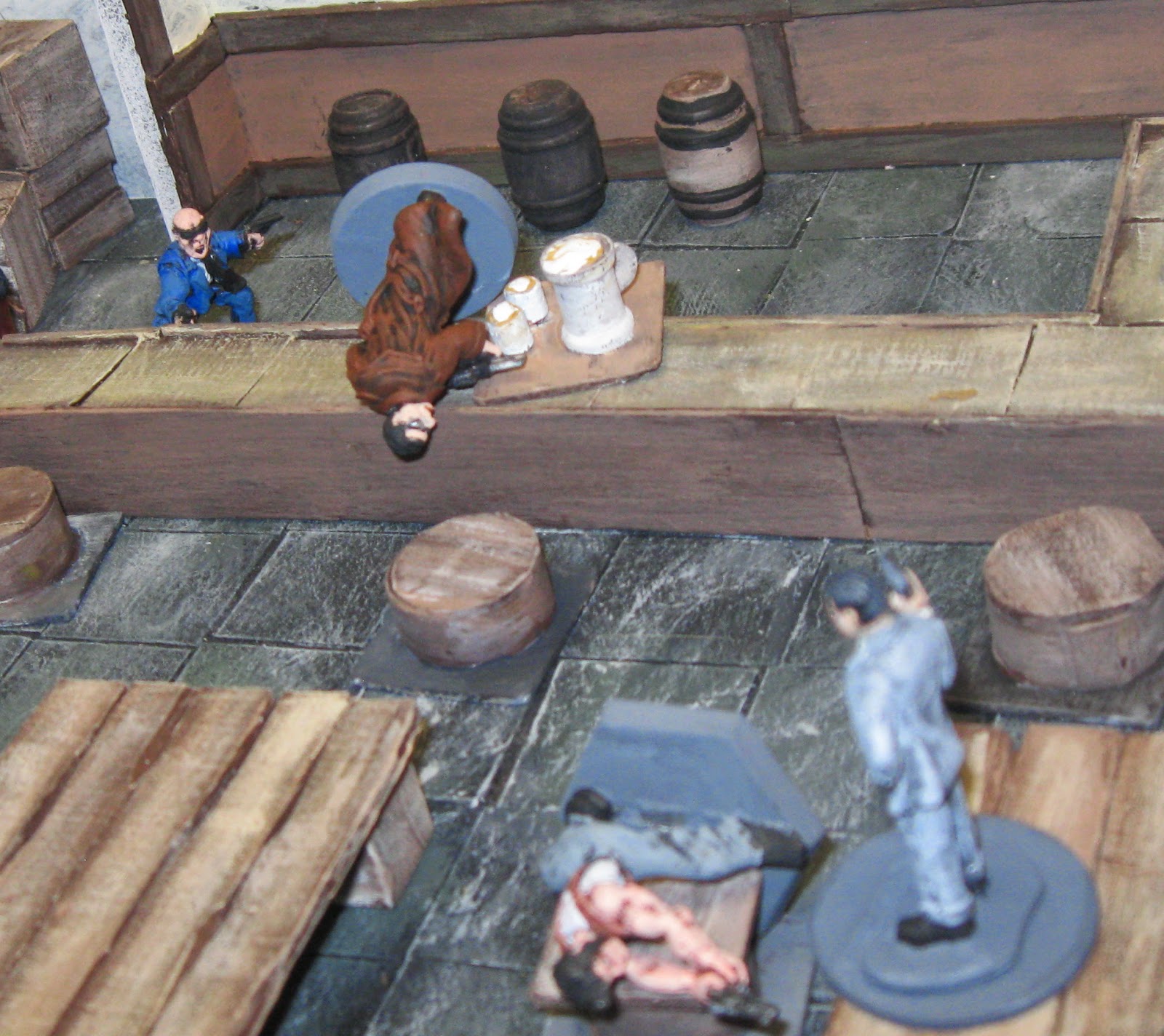 Special Agent Chan stands his ground as Two Gun fires away with each hand, but fails to hit the fearless detective.  (Two Guns has the ability to use a hail of gunfire, thus shooting one shot for each of his 2 Combat score).

Trench Coat attempts to stand and take cover in the bathroom doorway, but he hesitates and Chan takes him down with a single shot.  (Still the Yakuza's turn, Trench Coat fails his activations and gives Chan a chance to react.  Chan only succeeded in gaining one reaction, which he uses to shoot Trench Coat). 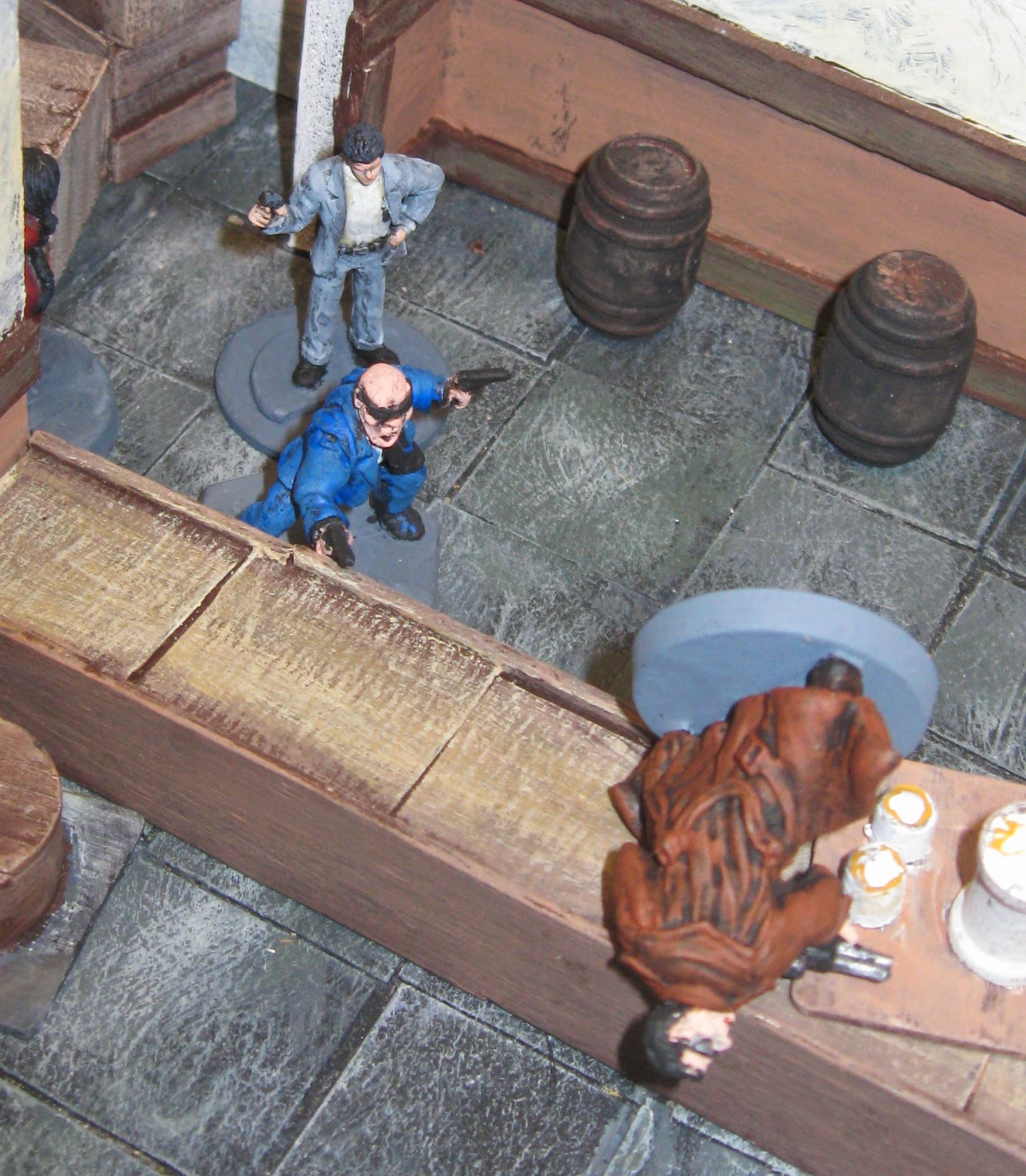 Chan launches himself off the table and does a full body flip through the air, landing directly behind the startled Two Gun.  With a swift strike to the back of the neck, he takes the last remaining thug out of the fight.  (Chan successfully rolled for 3 activations on his turn.  He spent 1 Chi to perform a Chi leap to jump a Long distance, followed by a power attack on Two Gun). 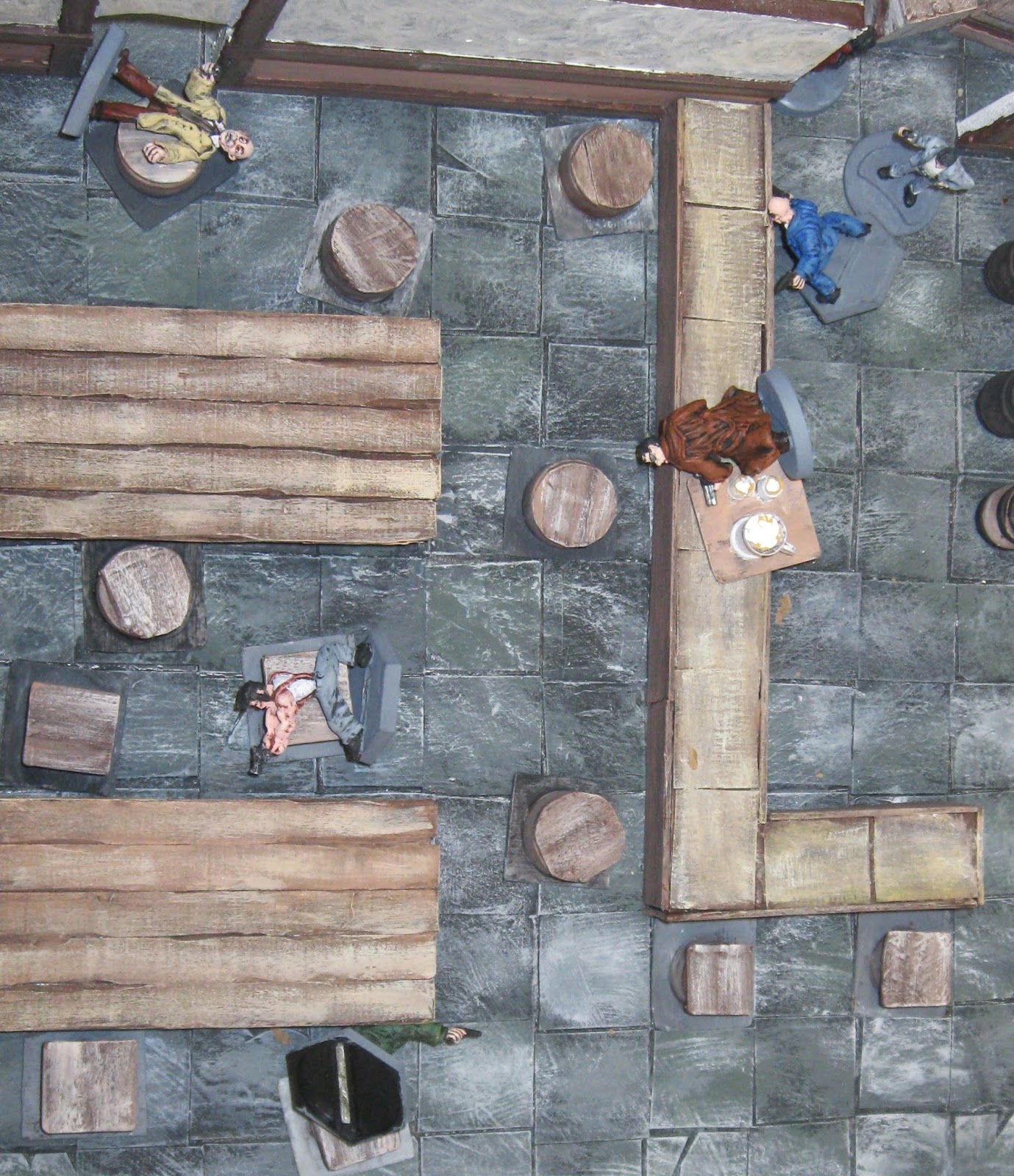 Special Agent Chan inspects the carnage as he cuffs Two Gun.  Three Yakuza captured and two dead or wounded.  "Not bad for a night's work," he thinks as he notices the unspilled pitcher of beer on the bar.
Posted by David at 9:44 PM 1 comment: