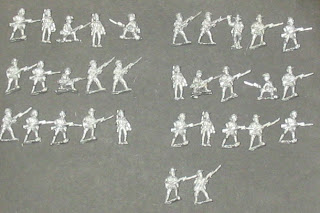 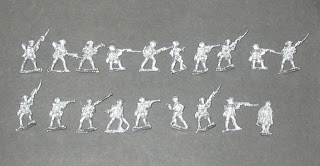 19 Wargames Foundry British in Helmet.
Posted by David at 7:37 AM No comments:

Italian M14/41 light tanks and a Semovente 75/18, painted but for touch up and decals. Three more Semovente 75/18's and a Carro Comando await some track detail and touch up. 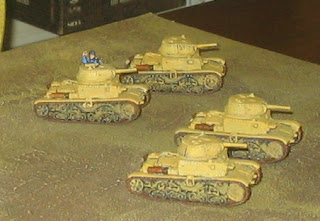 A British Crusader and Carrier run into a bit of a sticky situation.
Posted by David at 8:59 AM No comments: 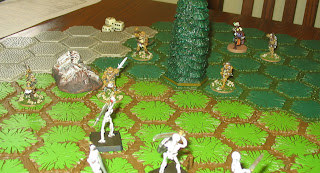 A powerful wizard works to unite the land under his despotic rule. To that end he seeks magical orbs of great power, created in past ages and forgotten til now. A shaky alliance of Man, Orc, Dwarf and Elf seek these orbs to use against the armies of the despot. One such orb has been located and the alliance sends it's troops to vie against the undead minions that guard it. The shaky alliance threatens to dissolve with the potential of possessing the orb. The Orc spread out and move in slowly towards their goal, yet keeping wary of their "allies". 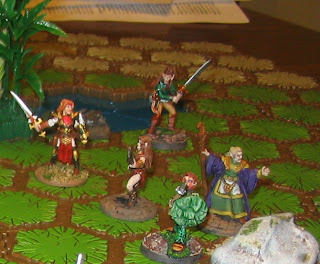 The Elven forces move swiftly towards the orb, with no thought of treachery or malice towards their new "friends". 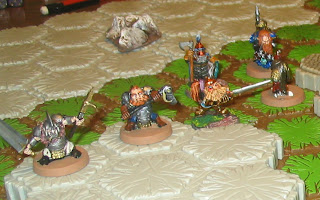 The slow moving Dwarves break into a sprint to close the distance to the ultimate goal. 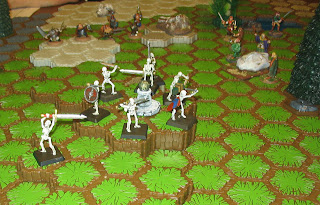 Awaiting all are the minions of the despot, his undead host guarding the orb from all who venture too near. 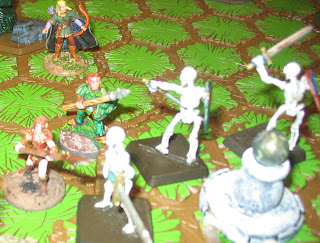 The Elves rush headlong in striking the first blow for the cause. Unfortunately for them the brittle skeletons are made of sterner stuff than meets the eye, and the Elves in the forefront take serious wounds in retaliation. 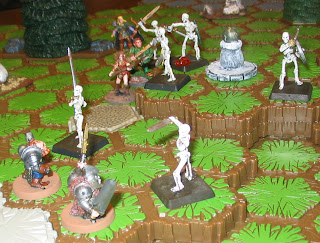 Soon the sturdy Dwarves join the fray, while the Orcs draw out stragglers to gang up upon. 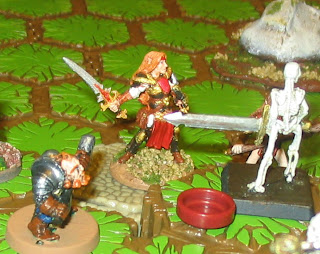 Elf and Dwarf fight side by side. 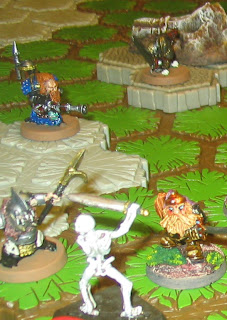 The Dwarves are supported by their wizard and crossbowman from the relative safety of the clearings edge. 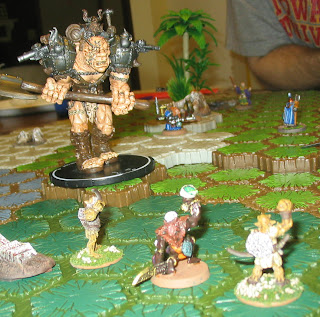 The Orcs, true to their reputation for foul-play, are the first to turn against their allies. As one their archers rain arrows upon the Dwarf wizard, while the Orc Shaman casts a powerful bolt of lightning that brings a mighty dwarf to his knees. The Dwarves loose no time before they retaliate. Their wizard summons a giant and sends it lumbering after the terrified Orcs. 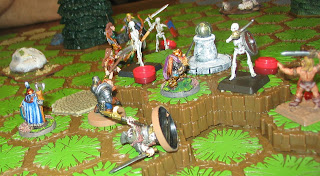 Meanwhile, Elf and Dwarf continue to battle the undead minions, and are joined by a warrior summoned earlier by the Orc Shaman. This warrior later proves to have been an illusion all along, yet the damage it inflicted is real indeed. 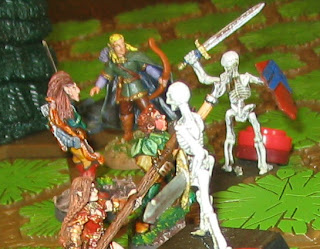 The Elves stand fast, despite the ferocity of their opponent. Before long, however, temptation is too strong, and Dwarf and Elf are also exchanging blows. The Elven mage, silent til now, throws a tremendous bolt of lightning that completely incinerates the Dwarven mage. The latter's summoned giant kills the Orc illusion, dissipating it, then disappears itself. The last of the undead guardians are eliminated and yet the "allies" continue fighting, each wanting sole possession of the orb. 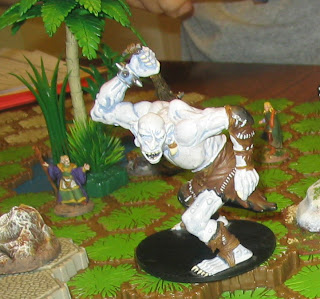 Now the Elven mage summons a giant of his own and sends it after the stalwart Dwarves. 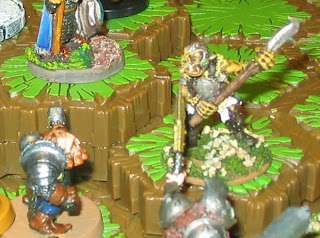 The Orcs continue to harry their heavily armored foe, as each side attempts to maneuver for any advantage that can be had. 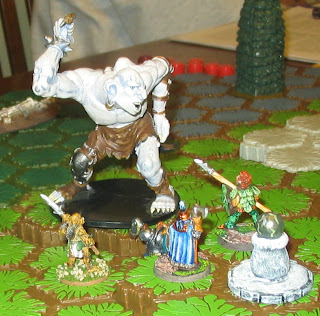 The giant moves to the Dwarven flank as the former allies position themselves for the endgame of this battle. Elven and Orc archers exchange fire, while a general melee ensues. A Dwarf axeman, the orb tucked neatly in his satchel, boldly faces the giant despite the nasty Orc that attacks him while his back is turned. The Dwarf in no time brings the giant to death's doorstep, but is denied the death stroke as the Elven mage, drained of all magic, can no longer expend the magical energy to keep the summoned monster in this realm. With the giant dispatched the Dwarves press their advantage killing Elf, Orc and even another illusion sent to battle them. The Elves, meanwhile loose their missile exchange with the better armored Orc archer, and see the last of their warriors fall to Dwarven steel. With the Elves no longer a threat, Orc and Dwarf turn full lethal focus upon each other. The Orc outnumber the Dwarves by one, however their Shaman is nearly out of magical essence, and the Dwarves, though injured have the advantage in arms and armor. Quickly the Dwarf giant slayer lands a devastating blow against the one remaining melee fighter in the Orc force, he leaves his foe prone and jumps at the chance to ensnare the Shaman in close combat. At the same time the Orc archer is rushed by the other remaining Dwarf, and snarls as he draws his dagger to fend off the looming battle axe. The Shaman casts a desperate spell, expending the last of his magical energies, and turns his fist into a weapon of hardened iron. With a critically placed blow he fells the mighty giant slayer and rushes to the aid of his archer companion before the effects of his spell dissipates. His Iron punch overcomes the Dwarf's armor and lands a killing blow. Quickly before any other "allies" arrive, the wounded Orcs slither away with their magical treasure.
Posted by David at 10:00 PM 1 comment:

A unit of Martian Royal Infantry supported by artillery and ready to face the invaders from Earth.

A partial unit of Martian Sverdvolk, fanatics that reject technology and fight only in hand to hand combat. 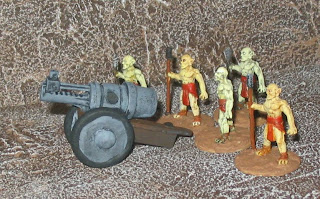 Martian artillery unit and their bizarre gun.
Posted by David at 3:23 PM No comments: