In a lawless boarder town in the Sonora Desert, Miguel and a Pinkerton Detective get into a dispute over which brand is the best Tequila.  Their dispute leads to gun play, leaving Miguel dead in the street. (not shown) 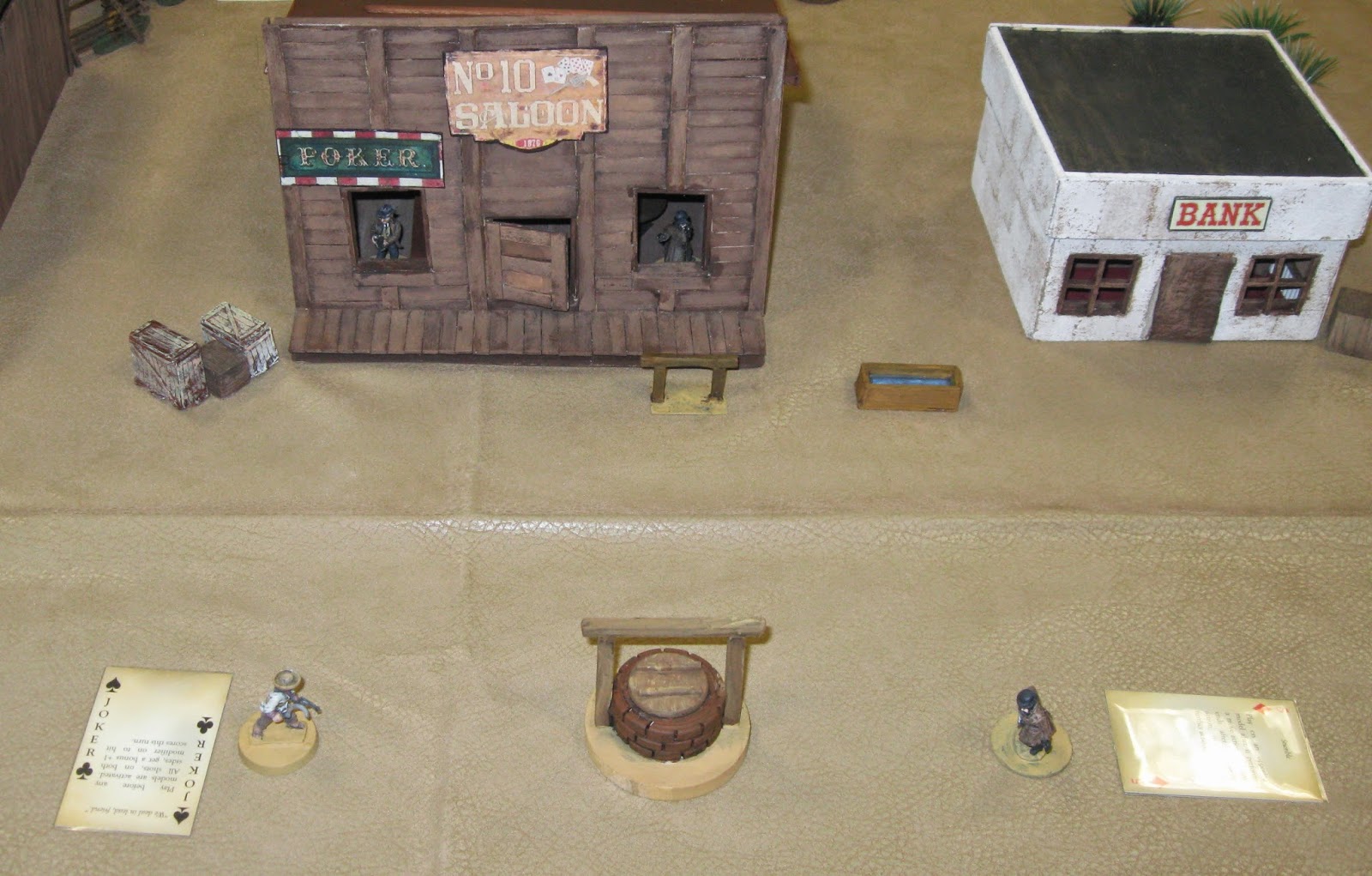 Of course Miguelito never said it would be a fair fight.  He grabs Miss Sally as she leaves the General Store and hides behind her flowing skirts. 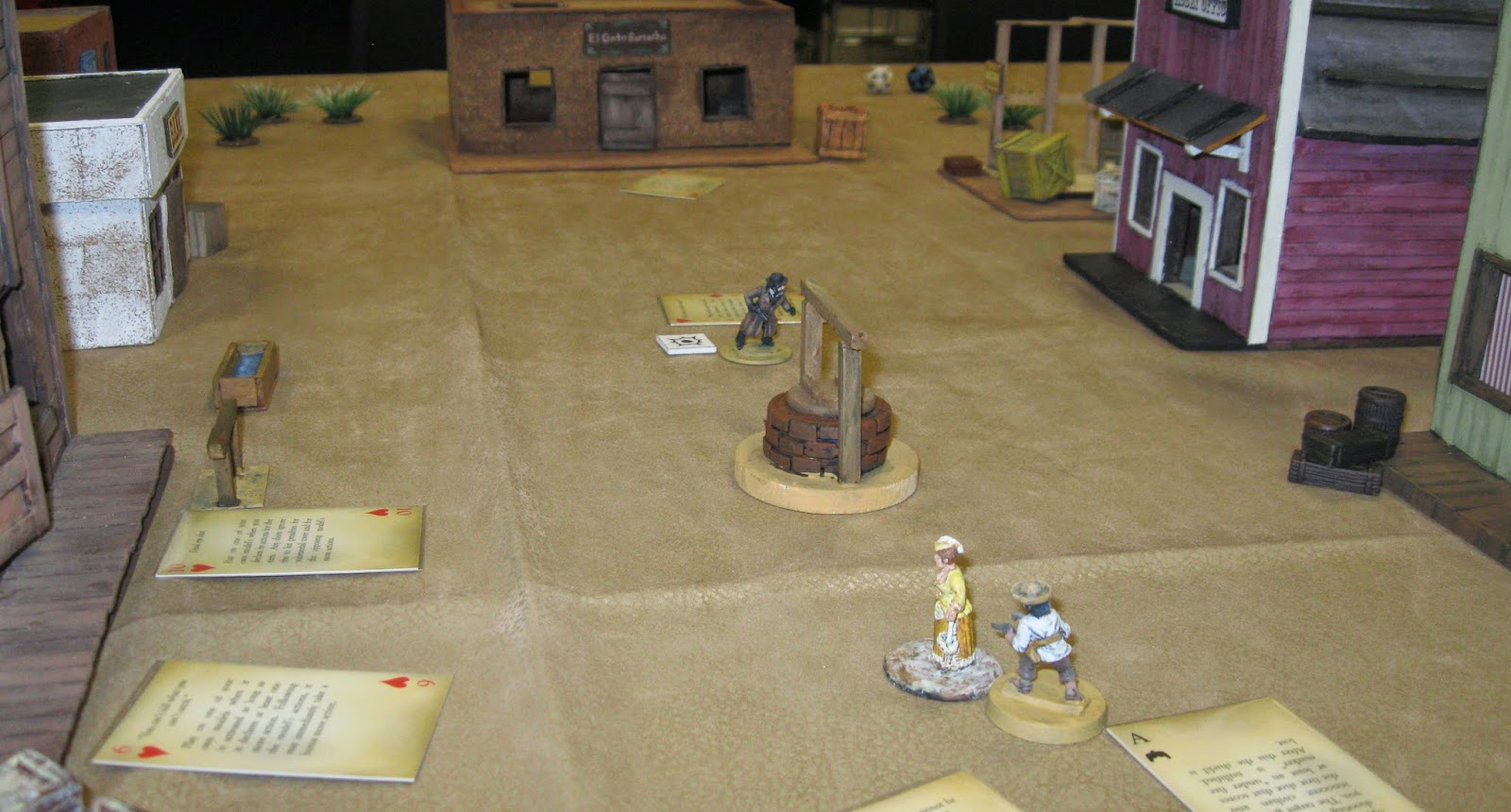 The fight commences as both men exchange shots.  Each man has friends in well hidden vantage points that add their fire to the fray.  Bernardo takes deadly aim from the hay loft, killing two Pinkertons in short order, running the detectives off. 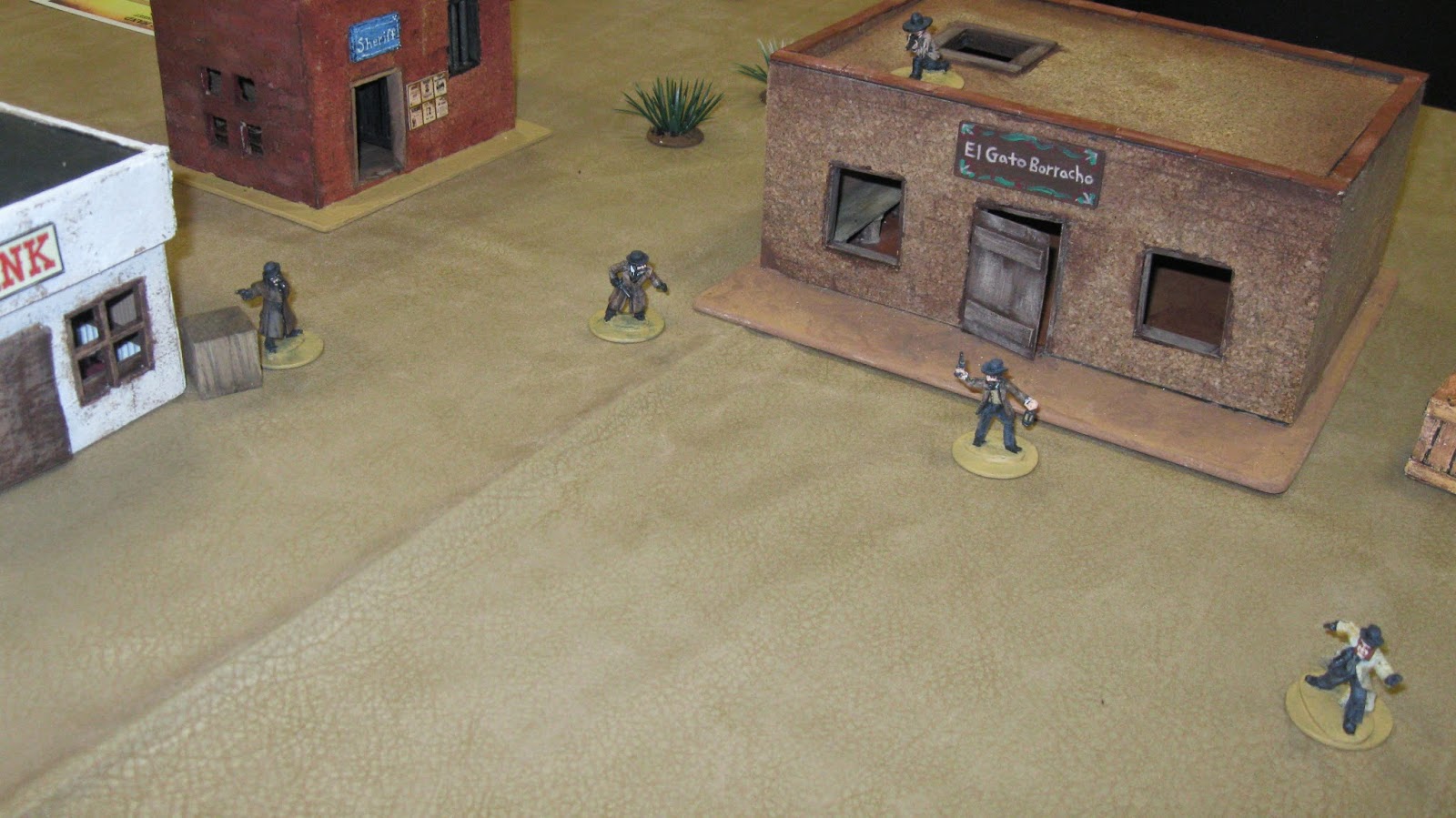 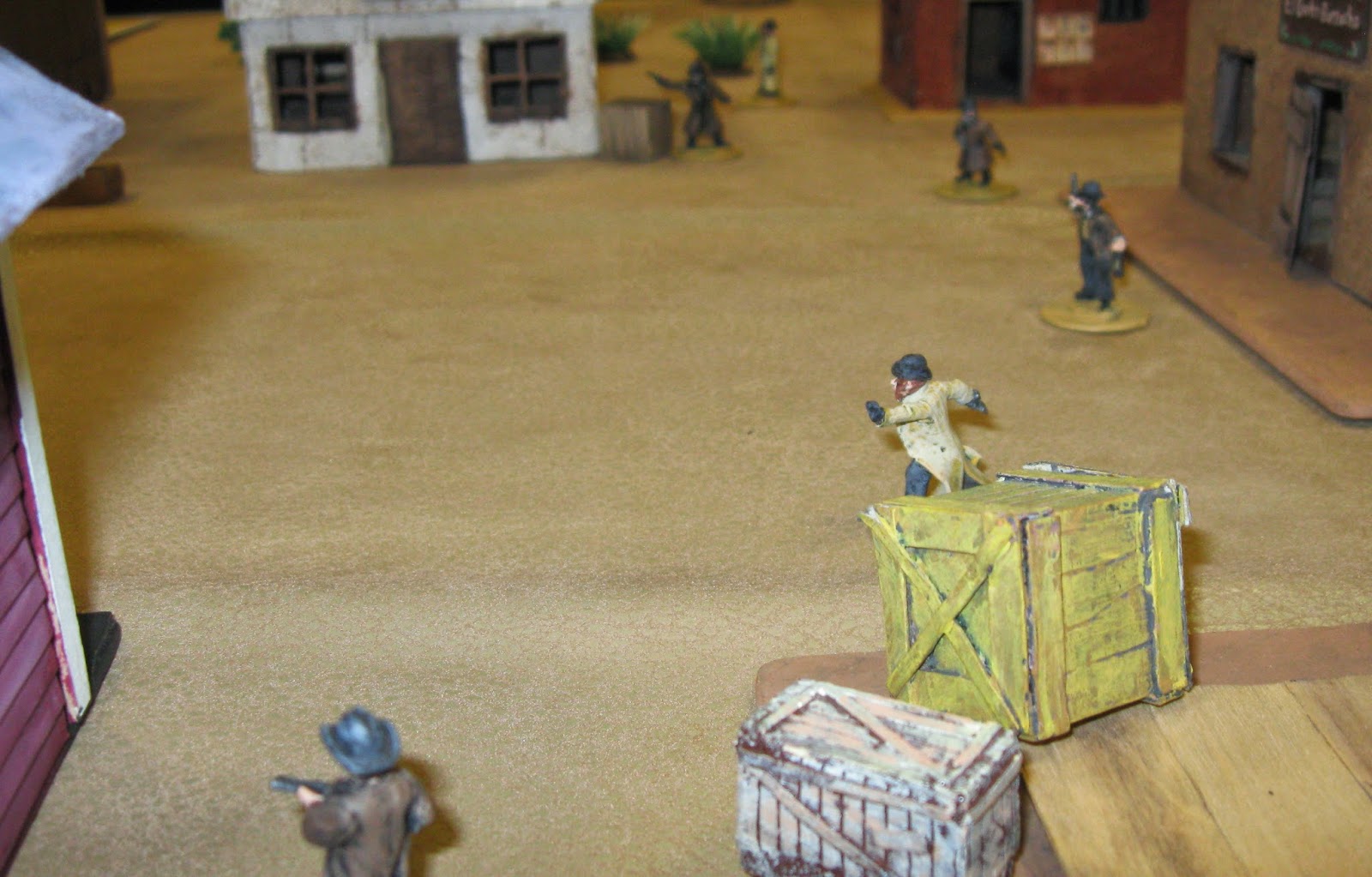 The Pinkertons get on the telegraph and call in more men.  They gather on the street looking for a fight. 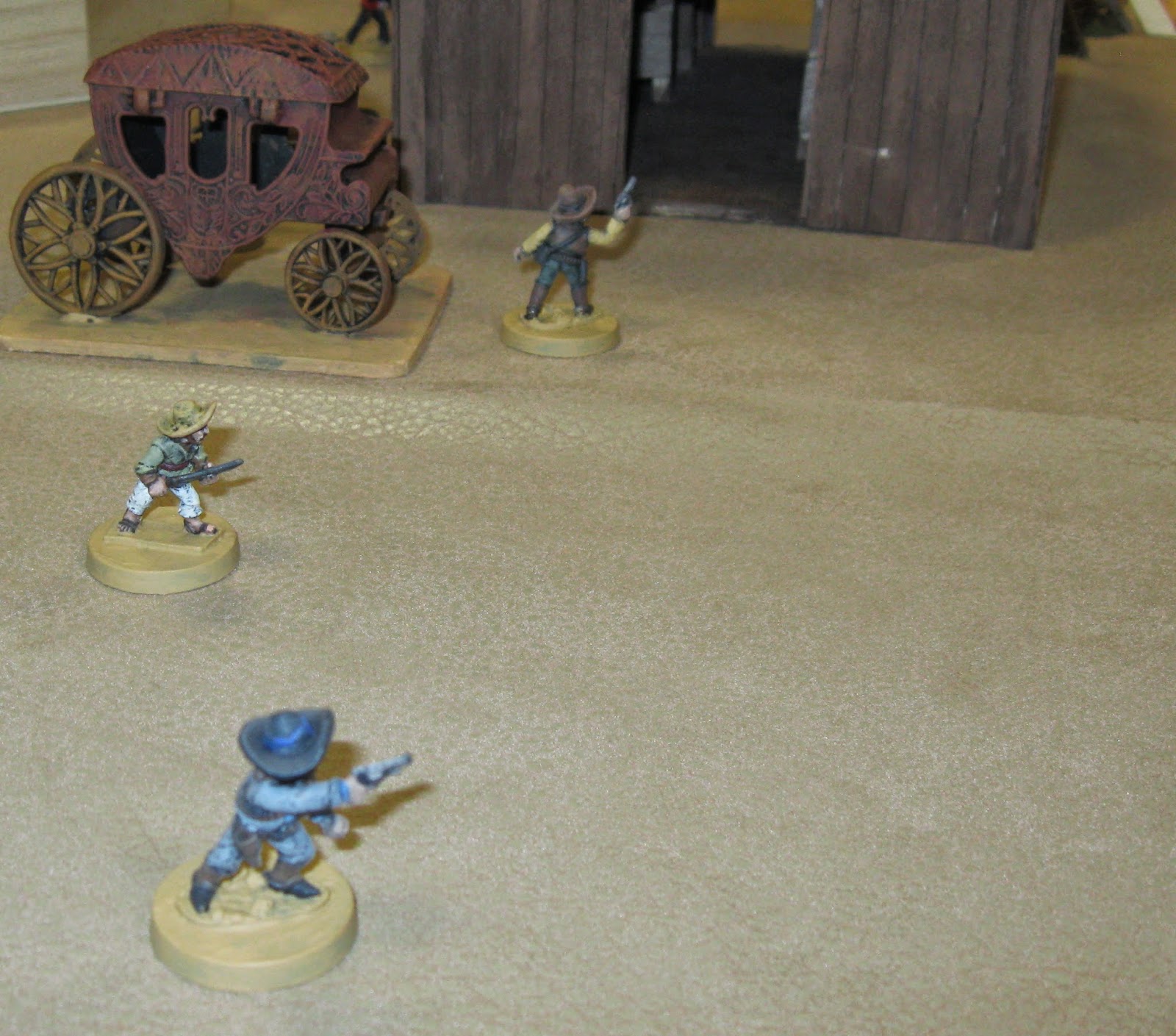 The Banditos call for more men from the Hacienda and gather on the street. 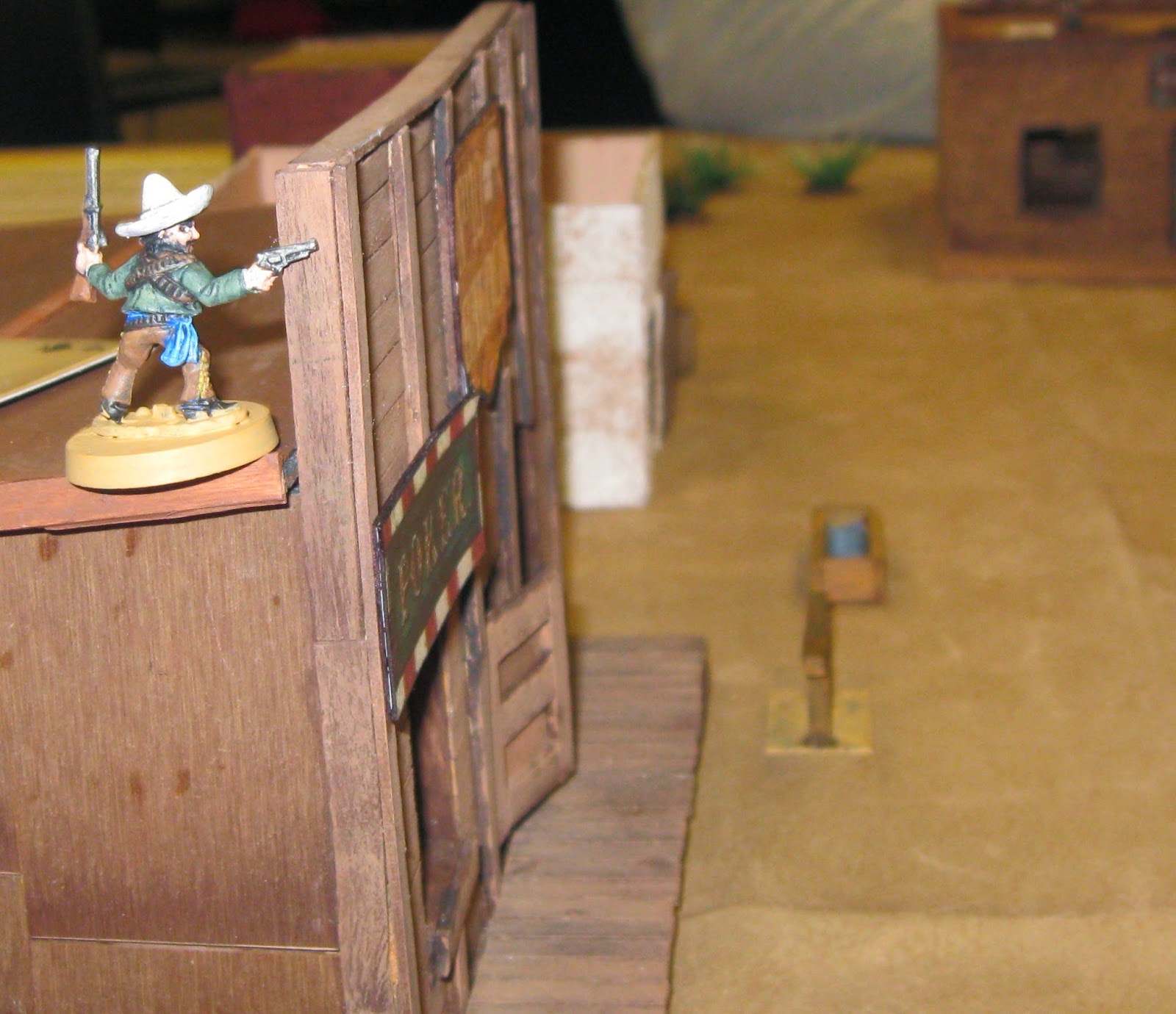 Except for Juan who hides out on the roof of the Saloon in ambush, rifle at the ready. 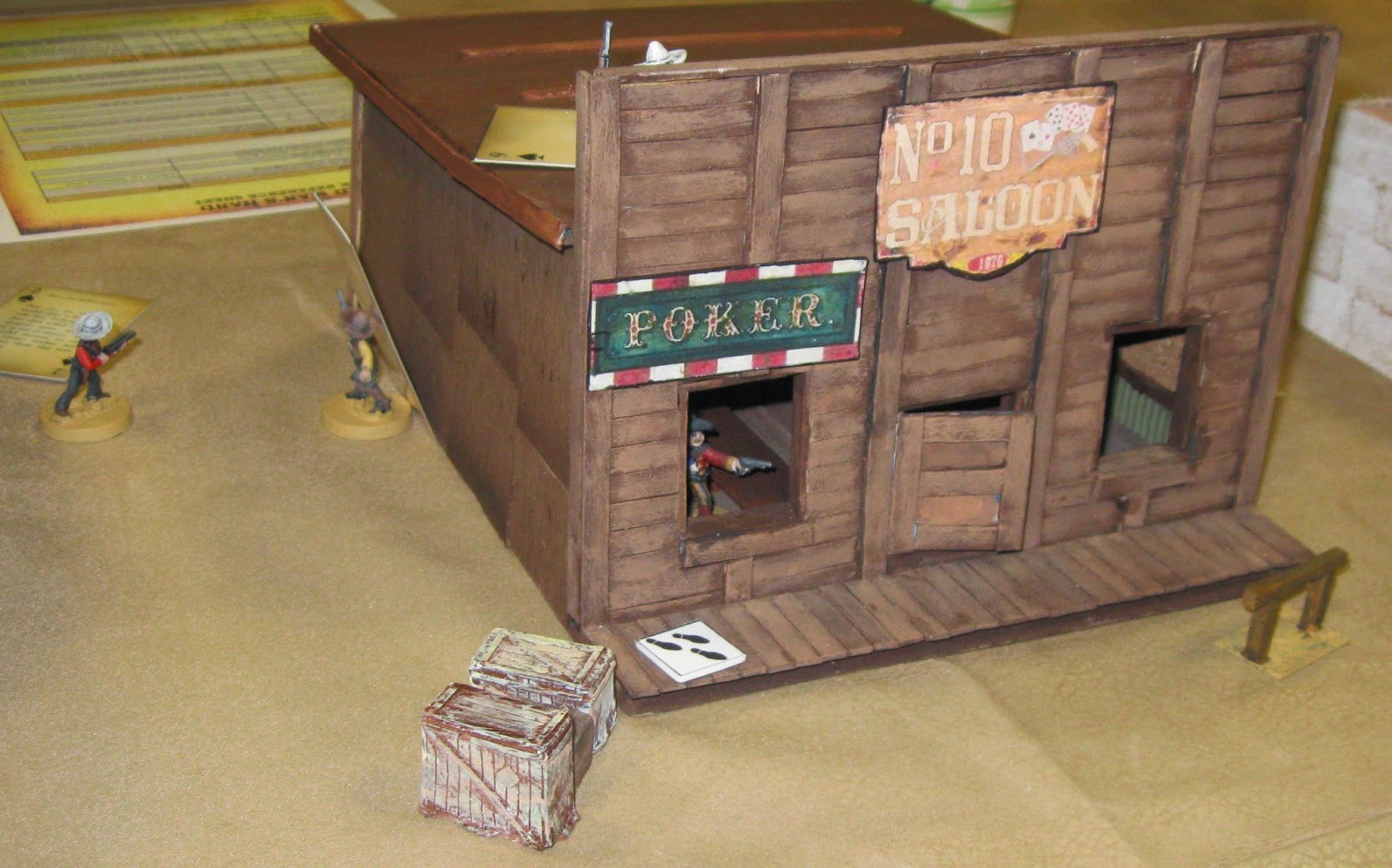 The Honcho leads his men down one side of the street, taking cover in the Saloon and looking out for Pinkerton operatives. 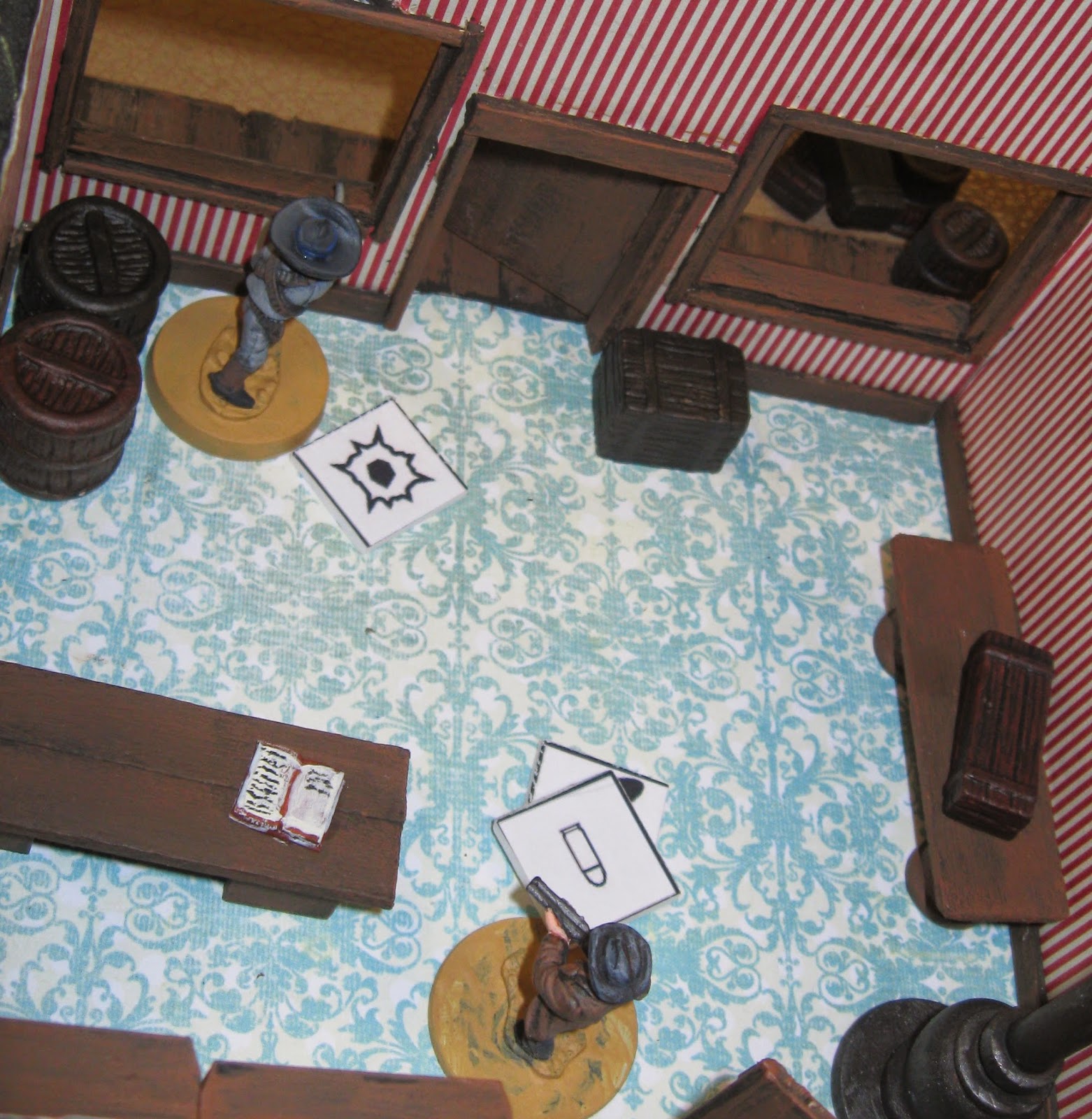 Meanwhile, the Charro, Luis takes up a position in the General Store.  A Pinkerton Detective gets the drop on him with a shotgun, but the sturdy gunfighter shrugs it off.  But then a Bounty Hunter enters the back door and lends his support to the Detective.  The two men take the Charro into custody. 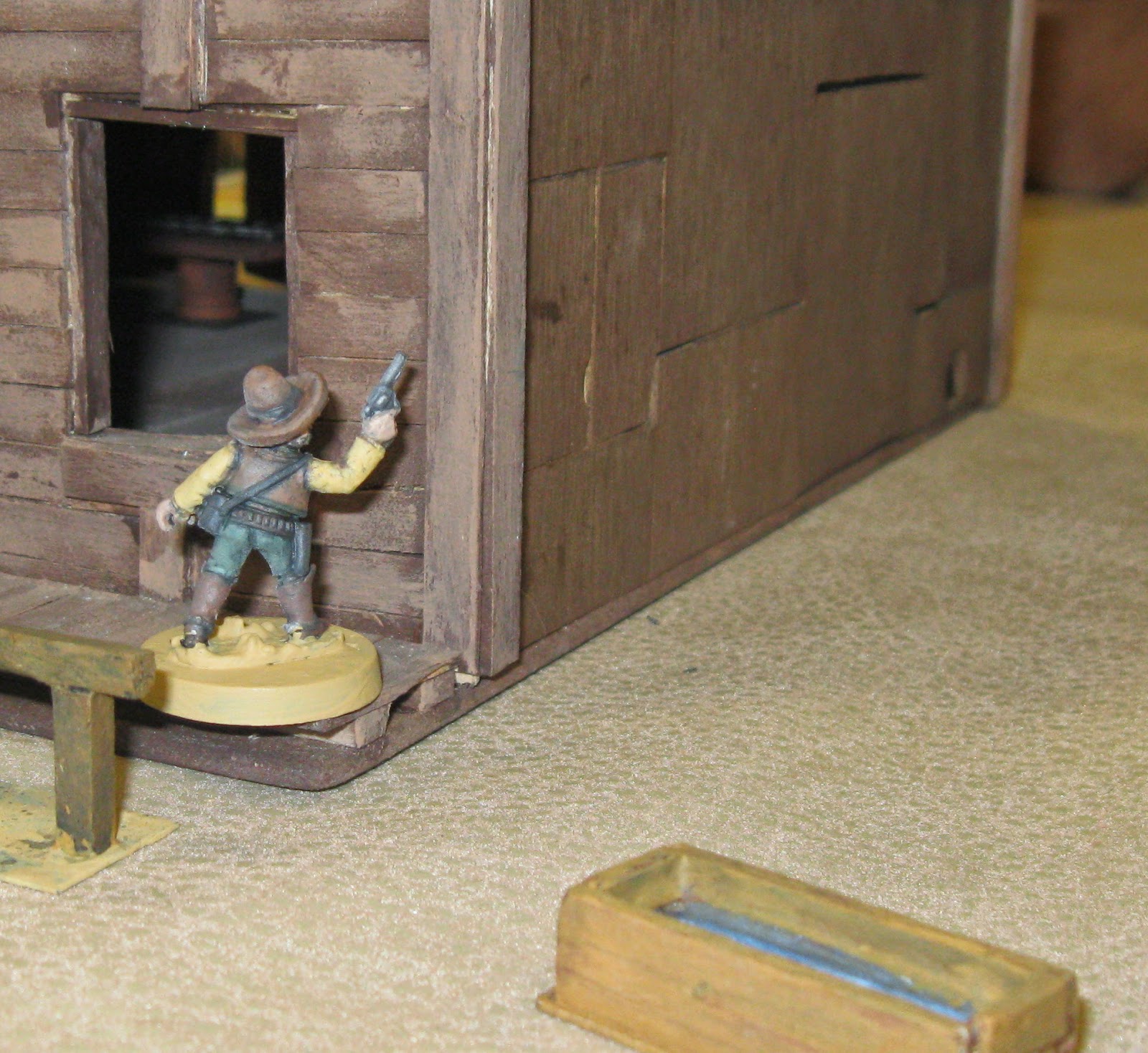 The battle rages about the Saloon.  One Caballero jumps through the window and kills a Detective taking cover on the side of the building. 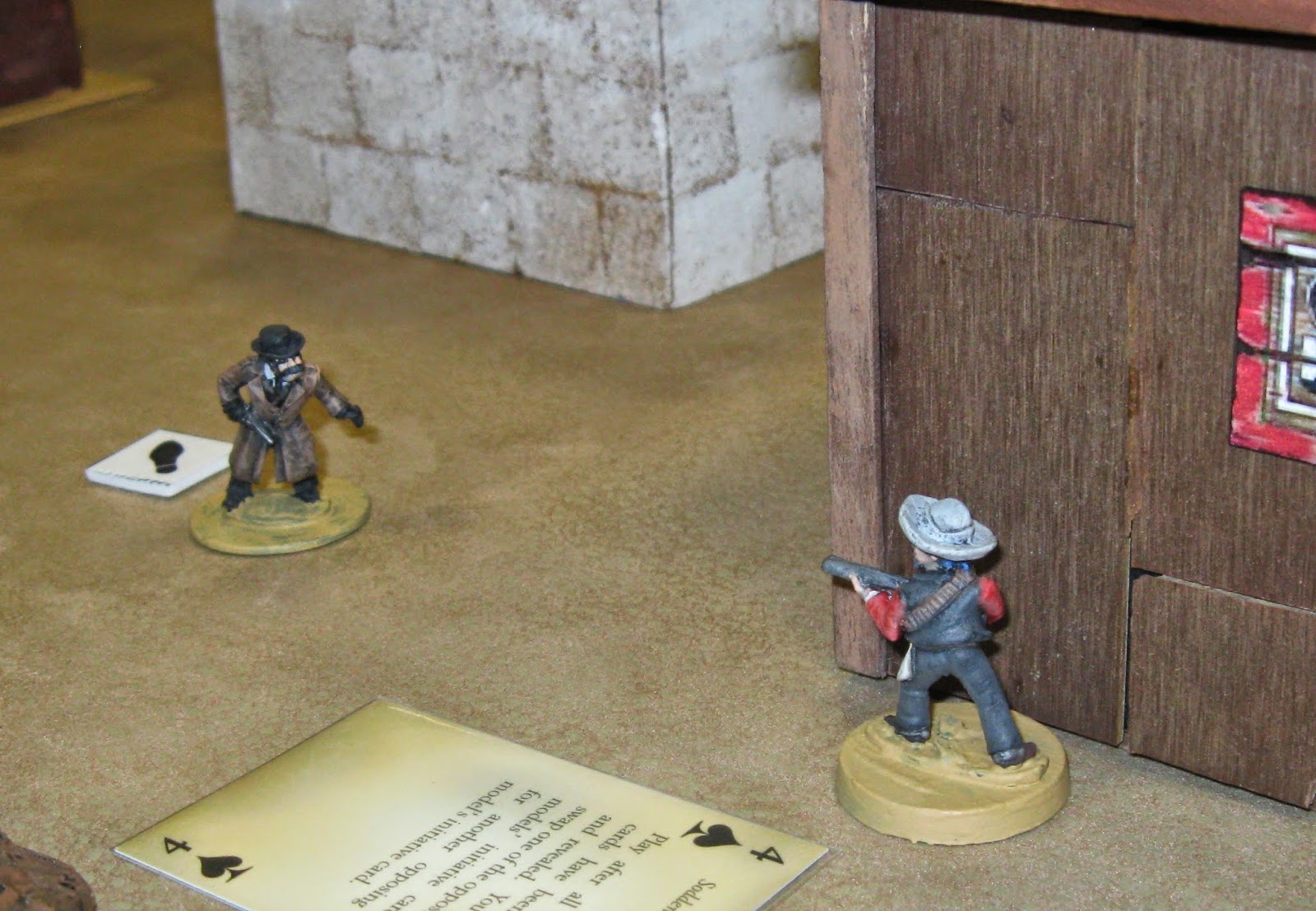 Another Caballero faces down a Detective behind the Saloon.  The Detective trips, giving the Bandito a chance to close in for the kill. 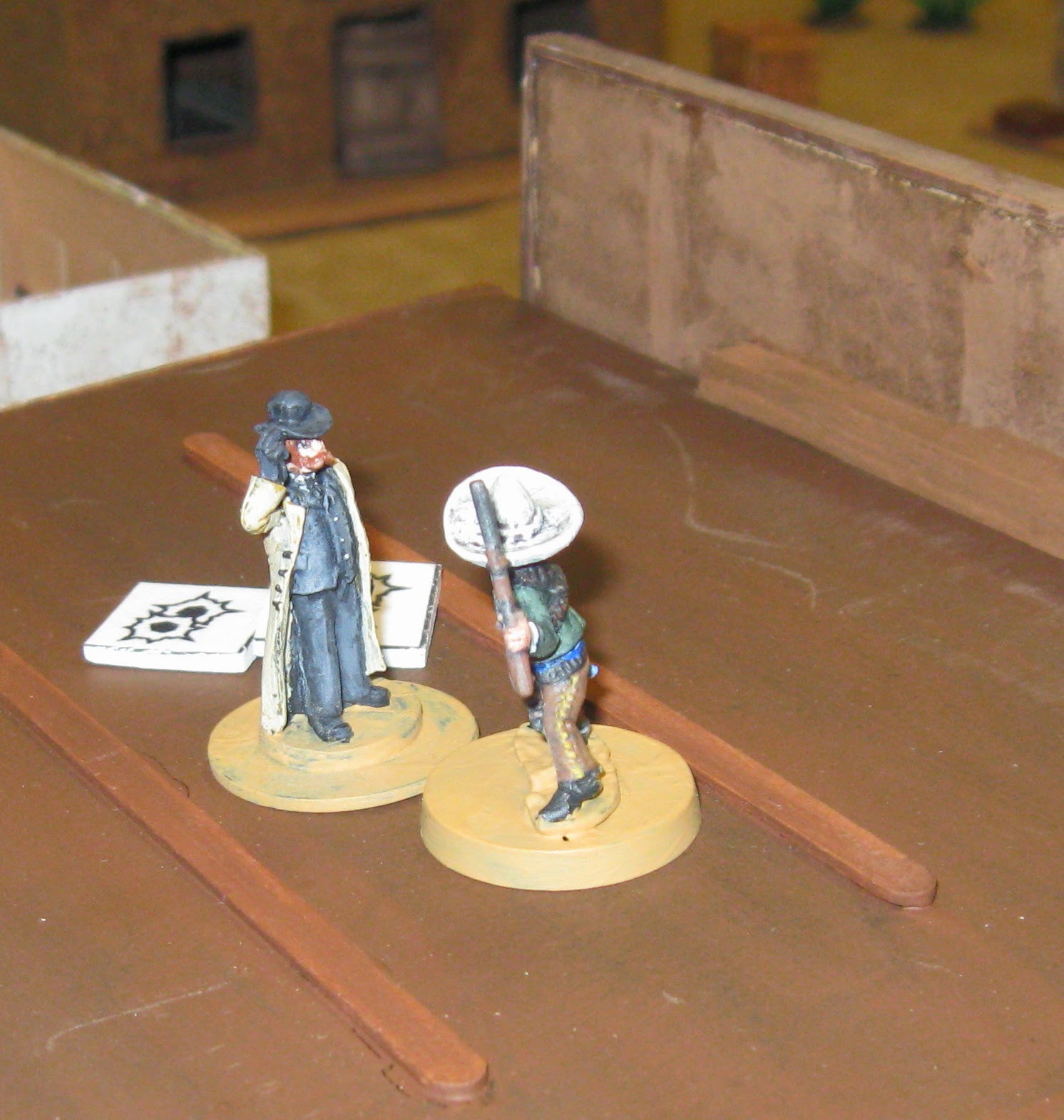 Meanwhile, the Pinkerton Special Agent climbs up on the roof of the Saloon and takes on Juan in hand to hand.  Though the Agent is the bigger and more powerful of the two, the wiry Juan manages to defeat the Pinkerton leader.

On the other side of the street a Vaquero is outmatched by the Pinkertons and, even though a compadre gives cover fire from the church bell tower, he falls to a hail of bullets.  After dispatching  the Bandito, the Bounty Hunter leads the way into cover, away from the constant rifle fire sent their way from Bandito riflemen.  The two Pinkertons head for the Cantina, where their remaining man puts up a spirited exchange with the enemy riflemen. 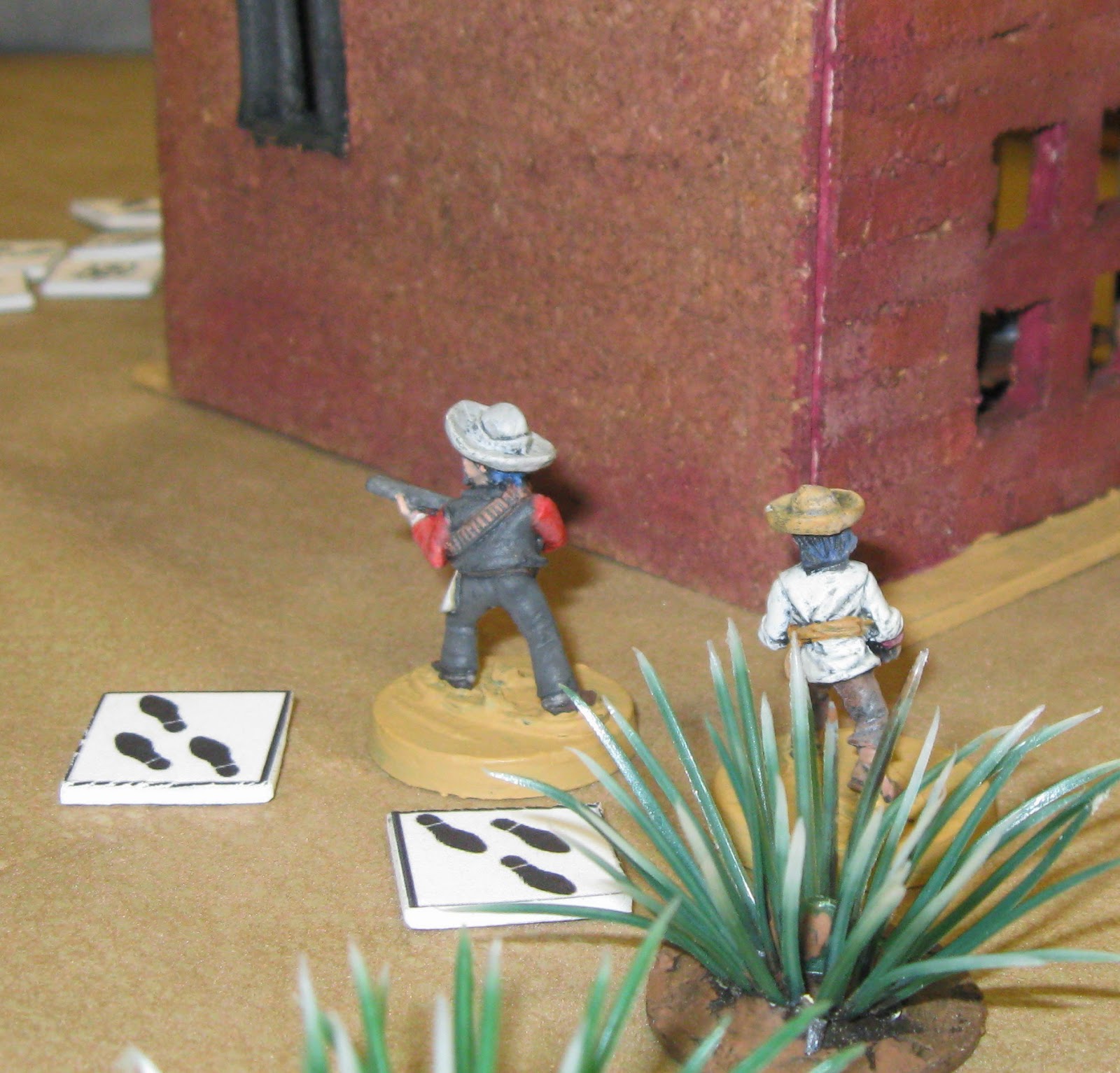 But the Banditos slip behind the jail in order to flank the Cantina and carry out their plan to dislodge the Pinkerton rifleman with a stick of dynamite.  The shotgun armed Caballero lights the fuse, but his sombrero slips over his eyes as he attempts the throw and the dynamite lands at his feet.  Ay Carumba!  Yet the smoke from the explosion allows the Banditos to finish off the stalwart Pinkerton. The remaining combatants play cat and mouse around the Cantina.  The Bounty Hunter and one Caballero are killed and finally a hail of bullets from the Honcho runs the last Pinkerton standing out of town.

Here are pictures from two 35 pt games of Warmachine and Hordes.  First Cygnar vs. Khador.  Next Legion vs. Scorne.  Thanks to Cory for Teaching us the game and letting us use his beautifully painted armies. 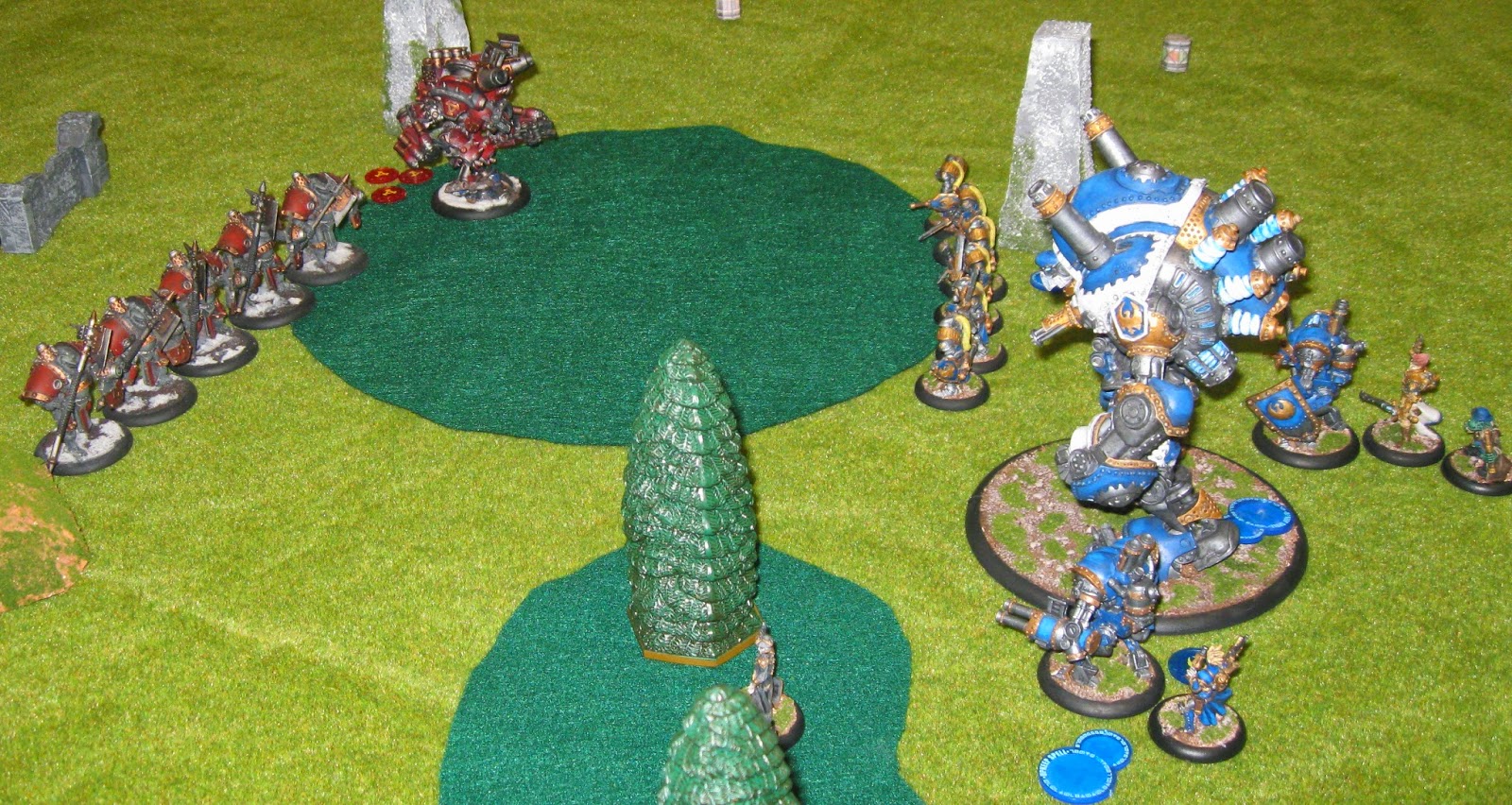 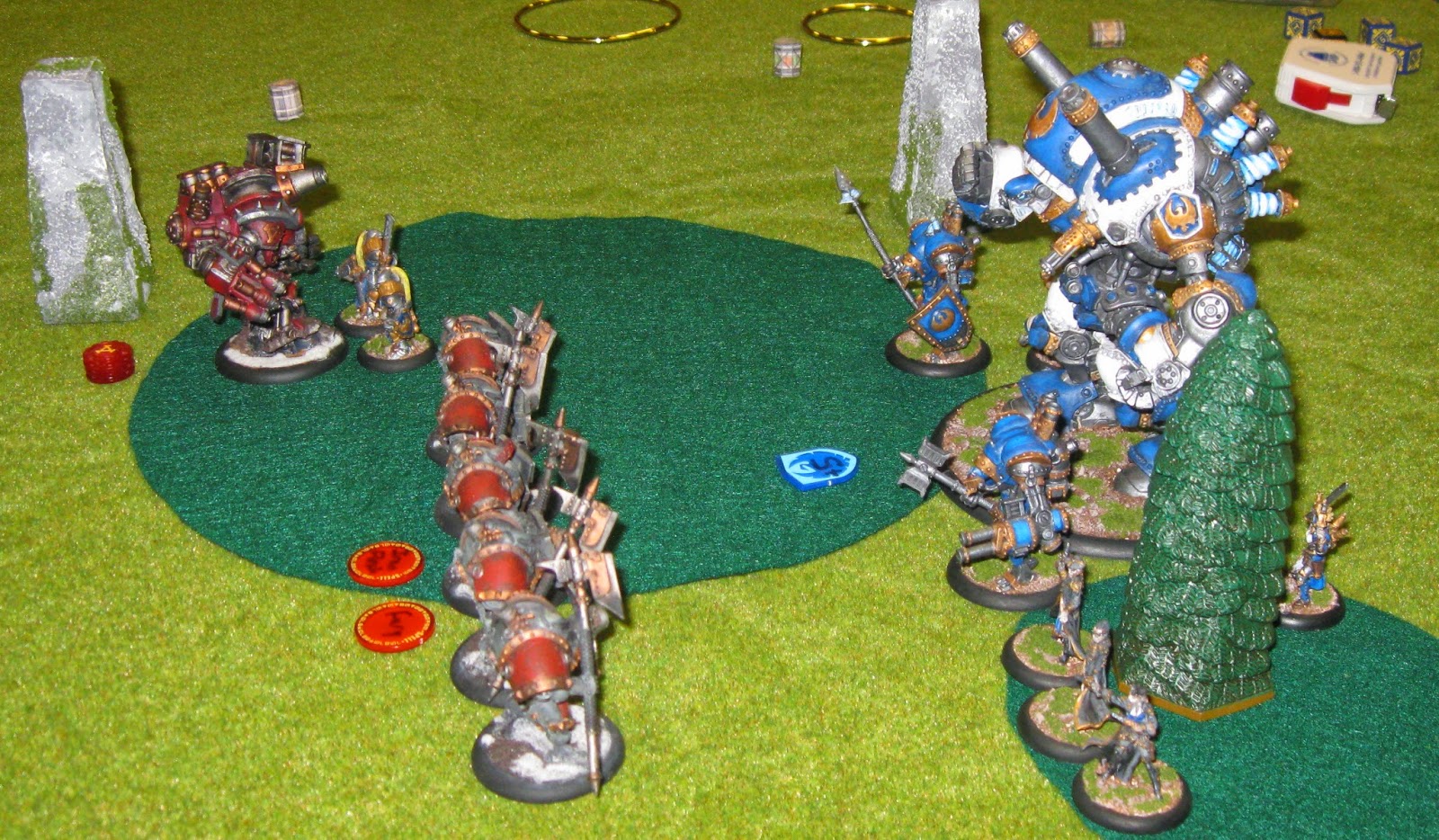 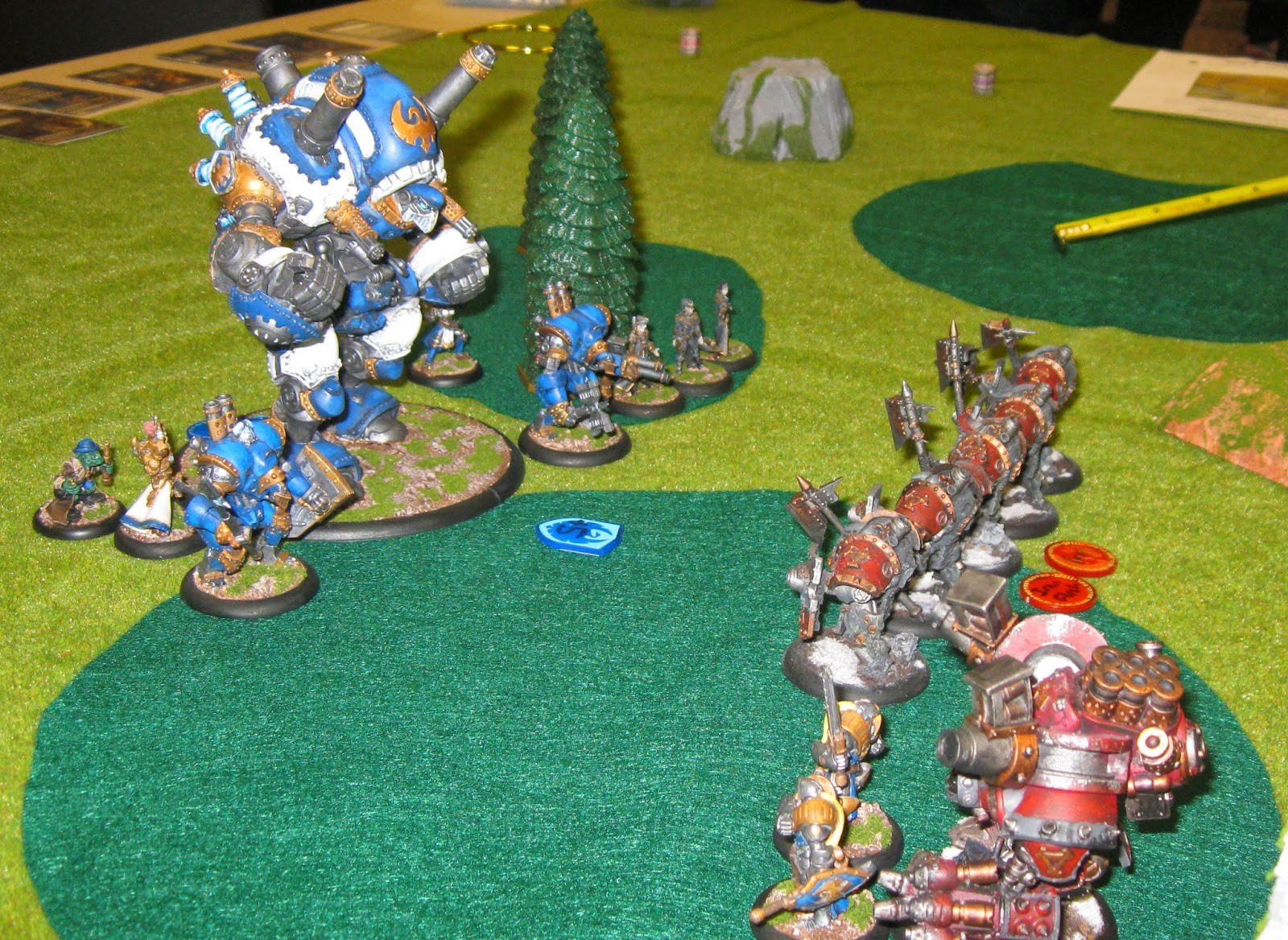 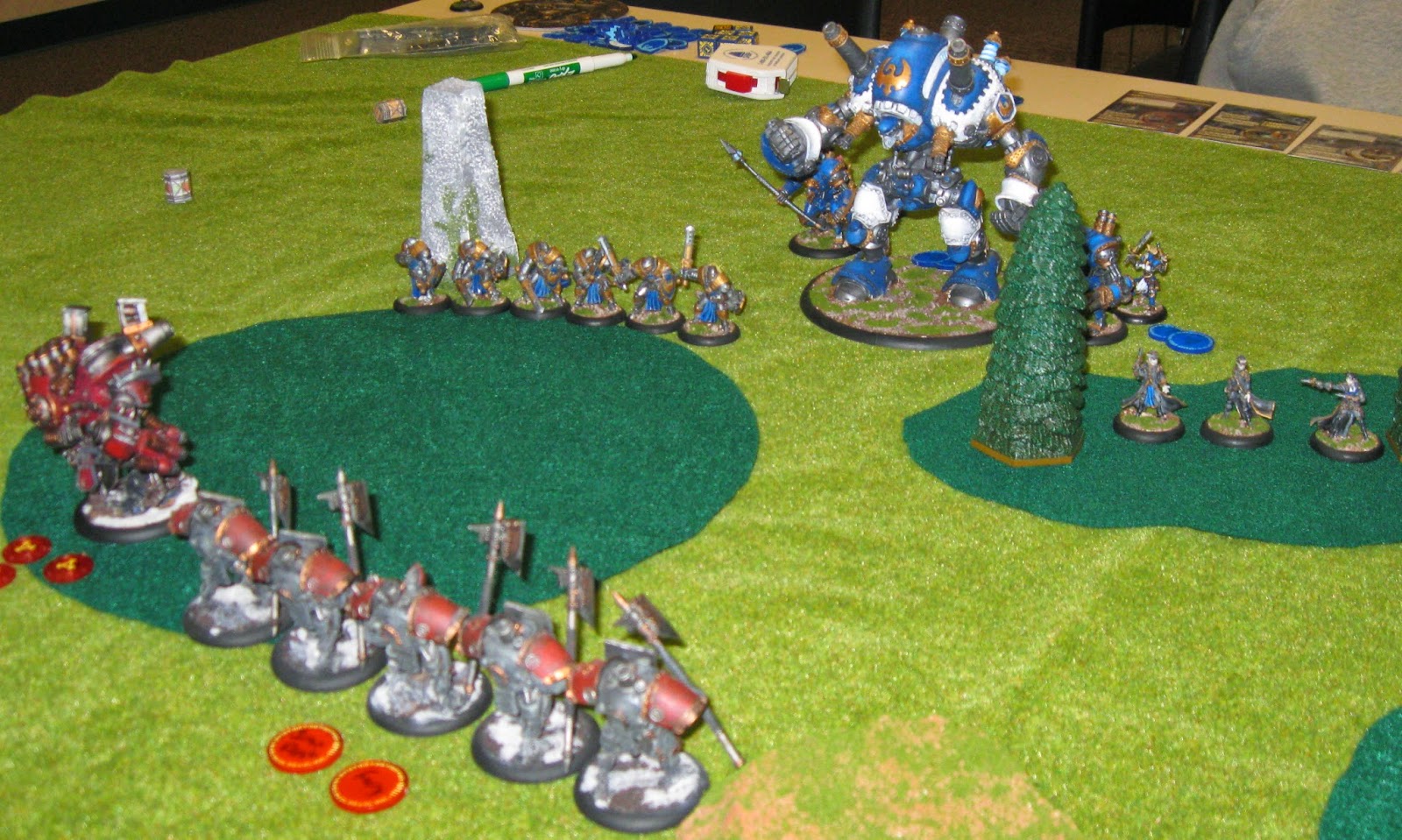 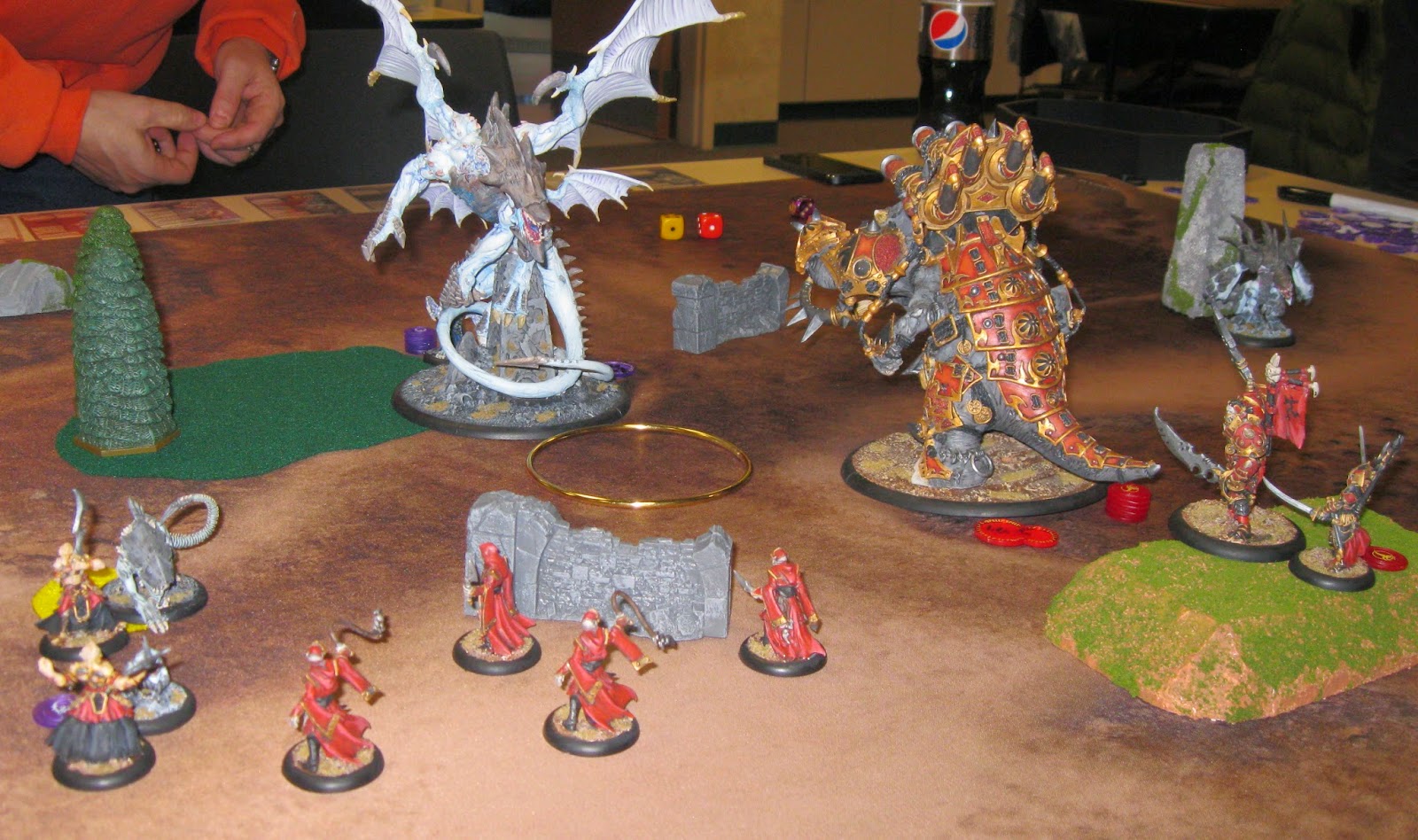 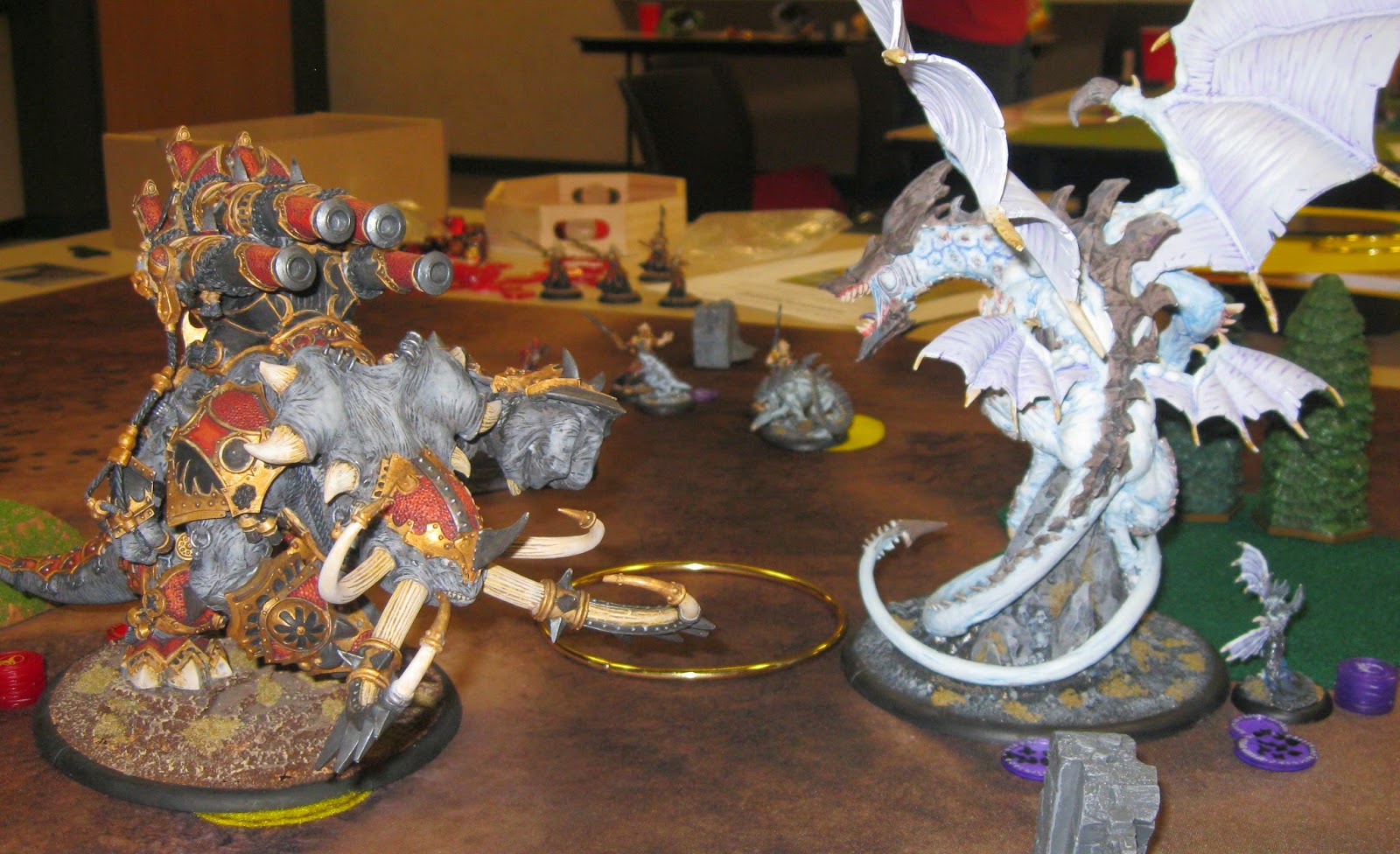 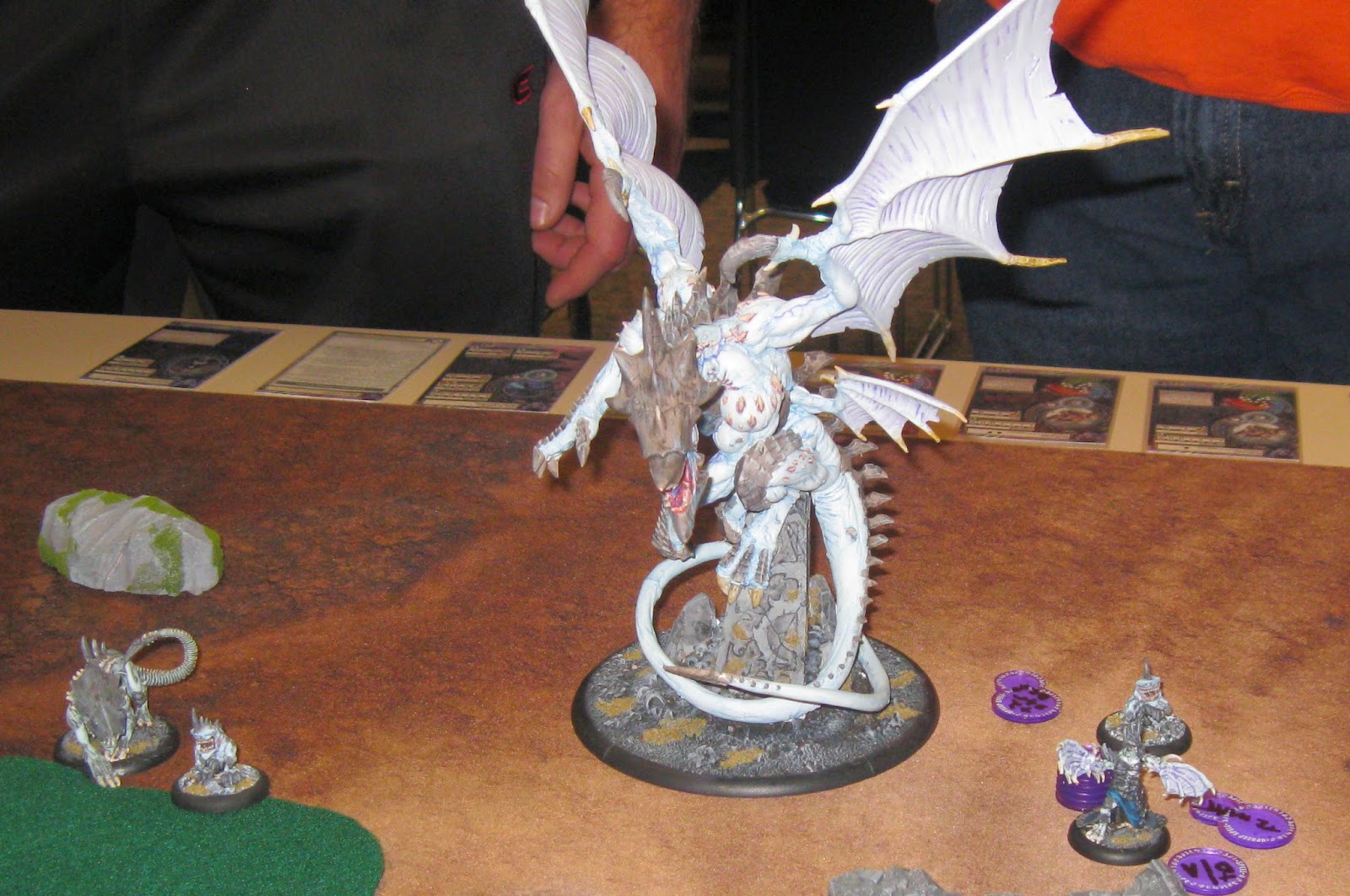 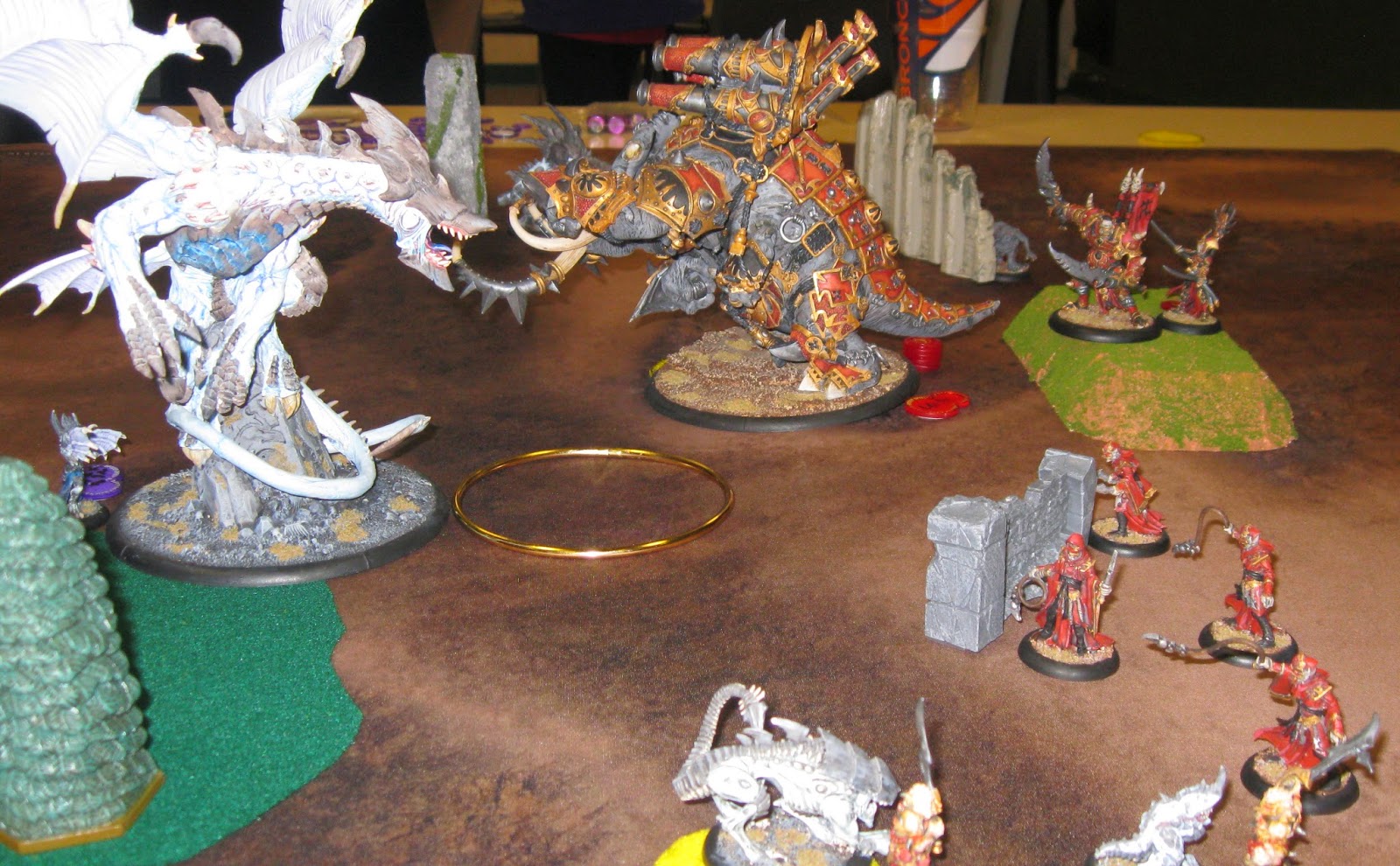 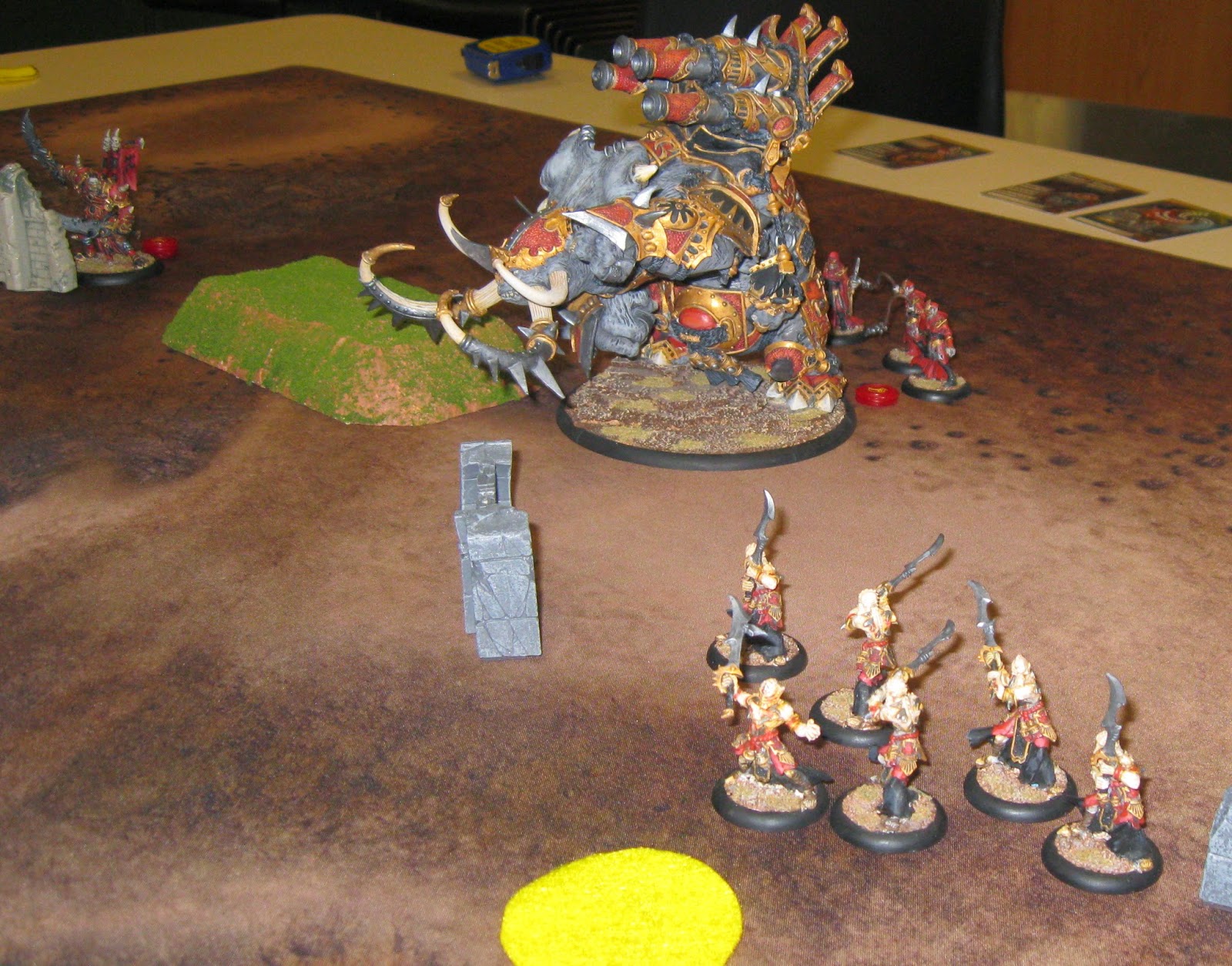