Miniatures: In Her Majesty's Name- The Society of Thule

Reports have been made that Count Von Stroheim and his Society of Thule have been spotted in Luxor.  The Prussians arrived soon after reports were published detailing that pieces of the Scrolls of Skellos may have been found in a near by temple.  The Society of Thule is an old and secretive organization, with activities that span the globe wherever occult phenomenon are reported.  Just what the Society is after, and what their ultimate goal might be is a mystery.

This image depicts Count Von Stroheim and associates emerging from the jungle at an undisclosed location. 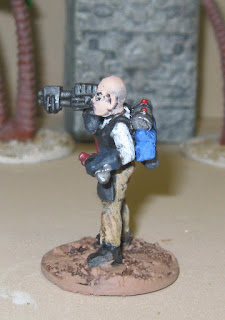 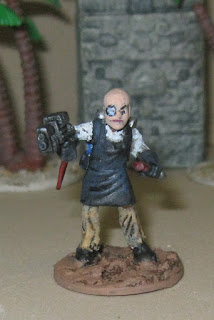 The Society is supported by the brilliant, yet deranged scientific devices of Dr. Kobalt, inventor of the serum that creates the hideous Tod-Truppen, zombie-like soldiers raised from the dead.  Here Dr. Kobalt is armed with an Arc pistol and a portable Arc generator. 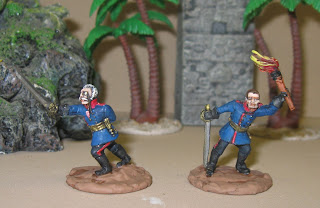 The Society draws many adventurous types such as these Prussian Nobles, fanatic swordsmen and duelists out to test their blades. 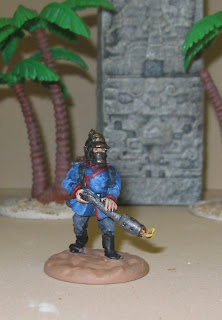 Feldwebel Krieg here may seem slight of stature, yet he is strong enough to carry a two man flamethrower all by himself.  He is usually found not far from Von Stroheim's side.

The Jagers of the Society of Thule are inoculated with a revivifier serum that turns them into the dreaded Tod-Truppen upon death.  As zombies, they fight on for their cruel masters. 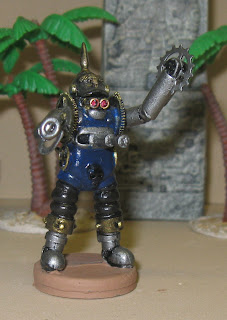 From time to time the Society also uses conventional technology, such as the Kaiser Wilhelm Walker.  This one is equipped with a machine-gun. 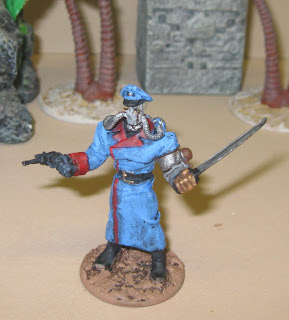 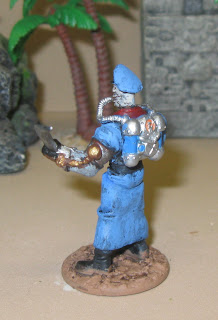 Count Von Stroheim himself is a monstrosity of a man.  He typically carries a Mauser pistol and a huge saber, which he wields with an All-Electric prosthetic arm, which is powered by the portable Arc generator he wears on his back.  The Count has been known to be very erratic, be well advised to stay out of his way if you should cross paths with the Society of Thule.
Posted by David at 11:38 PM No comments:

My son Dashiell (11) painted his first miniatures, a squad of 54 mm robots that we will use for the Laser Blade rules.  Here are his robots along with some 30 mm troopers I painted up to fight them. 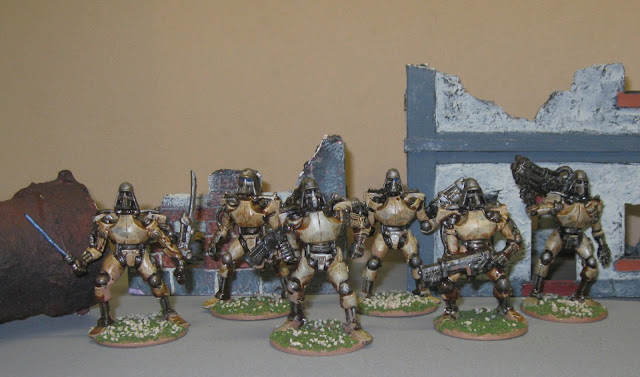 Dashiell's Robots will have heavy armor protection and have a variety of specialists with heavy weapons, rapid fire weapons and a hand to hand specialist. 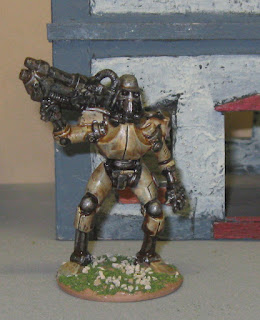 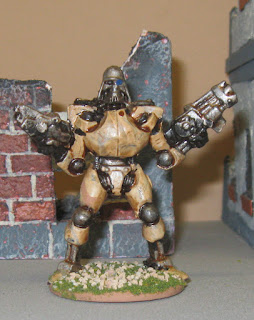 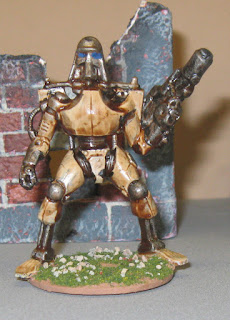 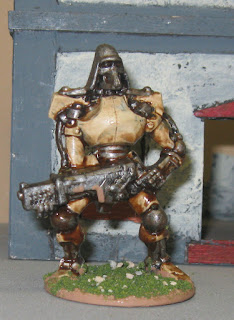 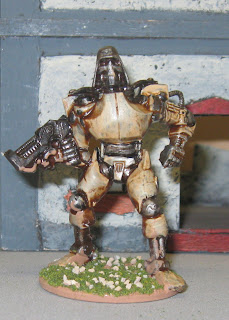 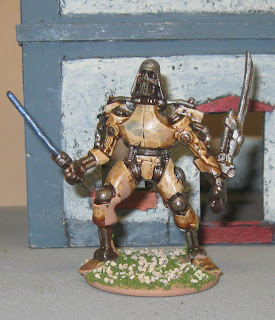 The human troops can be played as a single squad, survivors of larger units haphazardly pulled together to face the robot threat.  They can also be played as individual squads, the Blues and the Yellows, as seen below.

More Robots and Humans are underdevelopment, and we hope to get our first game played in the near future, so look for a game report then.
Posted by David at 6:46 PM No comments: 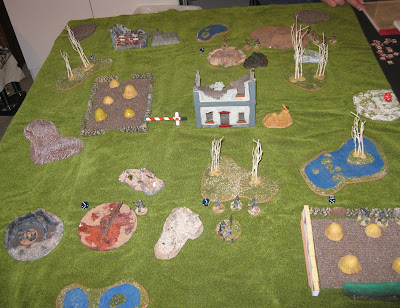 A squad of  U.S. Airborne and  German Panzergrenadiers have a chance encounter.  Each side strives to eliminate the enemy command as they vie for control of the ruined building center board.

Each side takes cover behind hills, light woods and piles of rubble from previous battles. 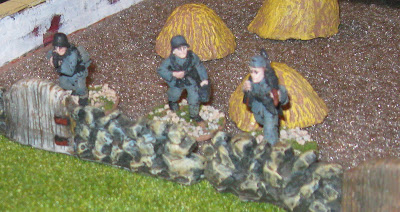 The German squad leader positions himself near an Mg-34 team.  From this position he points out targets for the German light mortar.

For the Americans, their B.A.R. gunner takes point as they maneuver into position. 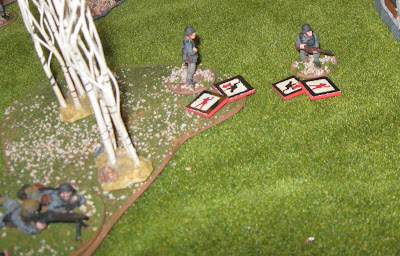 The German Mg-42 sets up position in a copse of trees to cover their advance.  German riflemen rush through fire by the U.S. .30 cal in order to reach the building. 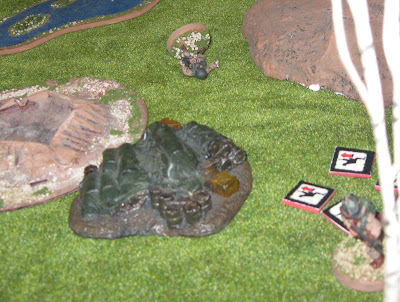 The Americans suffer the first casualty when a rifleman goes down to German fire. 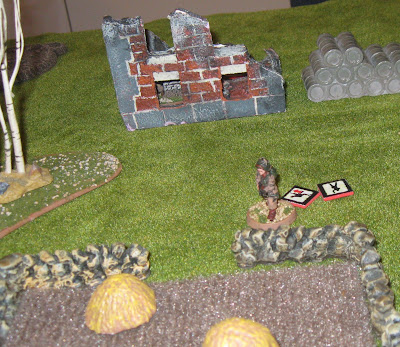 The U.S. .30 cal team has a good position in a ruined building, and covers a rifleman as he strives to flank the German position.

Both sides cautiously approach the building, jotting from cover to cover. 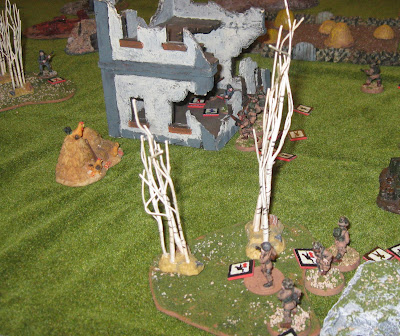 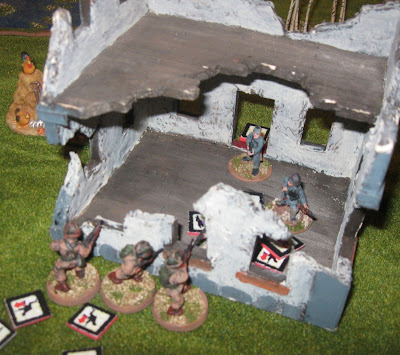 The Germans, led by their Corporal make it inside the ruins first, with the American Sargent and his men nearly on top of them. Whoever is quickest to react will determine the outcome of this struggle. 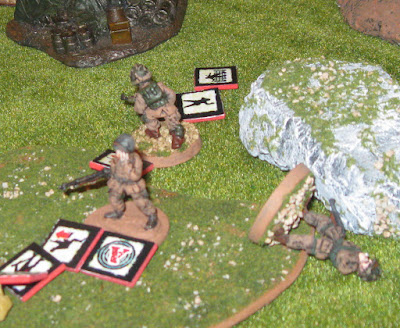 Meanwhile, the American B.A.R. gunner and riflemen in the woods come under fire from the German morar. They are pinned down and suffer further casualties. 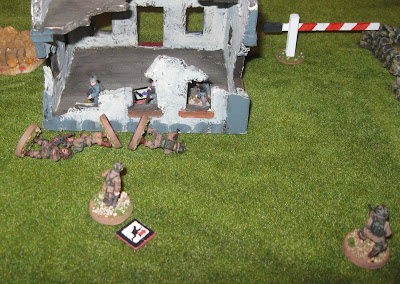 The German Corporal steps forward with his MP-40 and sprays the Americans attempting to take the ruins.  The U.S. Sargent and several others go down in a hail of bullets. 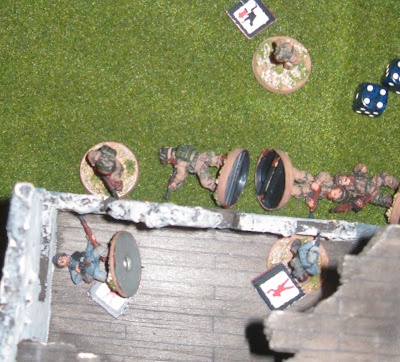 U.S. riflemen bravely charge the German positions in a last, desperate attempt to win the battle.  One German rifleman goes down, but the hardy German Corporal stands his ground.  The U.S. withdraw leaving the Germans in command of the field.
Posted by David at 6:25 PM No comments: