Blood on the Blade- Episode Three- Free the Prisoners

Previously...
The party stood to defend the homestead of a healer that took them in and ministered to their injured leader.  The Undead caught their sentries by surprise and soon overwhelmed the exhausted defenders.  All of them fell in battle and were left for dead, while the Temple they fought to protect was defiled, and the healer they sought to protect was brutally killed.  Eventually they picked themselves up and tended their wounds, but soon discovered that one of their own was missing.  Baird was nowhere to be found, but drag marks and a blood drops left a clear trail they could follow to find their missing companion. 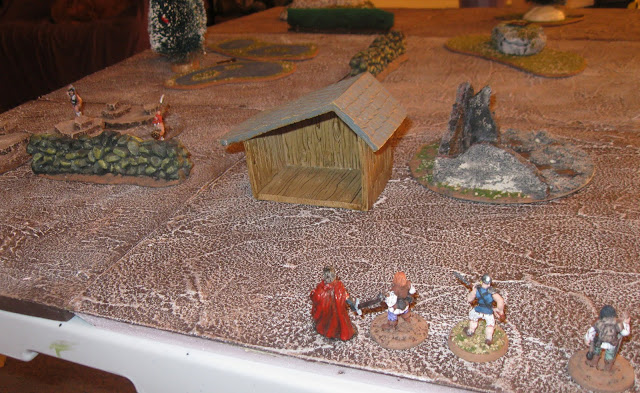 The party travels in a heavy silence, afflicted both with the horrible visions of the previous night and the penetrating fear of what may have befallen their missing team mate.  Thorstein proves adept at tracking, though the trail takes no skill to ascertain.  They travel for what seems like days, but in reality is probably only a few hours.  The trail leads them to a mountain valley that boarders on more wild, uncharted lands.  It then starts to become faint as the rocky ground replaces the trees and grasslands.  Osrina spies smoke on the horrizon, and without a word they head towards the source.  It turns out to be the remnants of a farm house that is already burnt, but still sends tufts of smoke and ash skyward on the breeze.  As they approach Richard sees raiders from the hill tribes scavenging the site.

(Blood on the Blade lets you pick what adversary to fight for most battles.  Many enemies have multiple versions, including a tougher version to face a more experienced party.  I wanted to try out a different enemy for the game, so I chose Enemy Warband, which I interpreted as hill man raiders.) 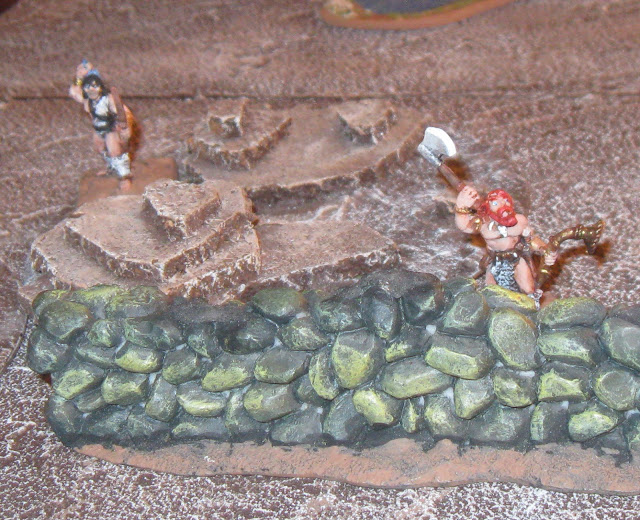 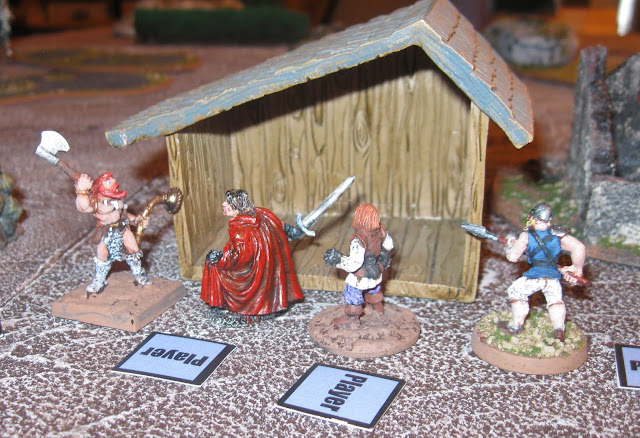 The raiders are scrounging the grounds for any metal or valuables they might find.  As the party approaches the one intact shed, the raiders rush out to intercept them.  The largest of the two swings his axe at Richard, and the battle ensues. 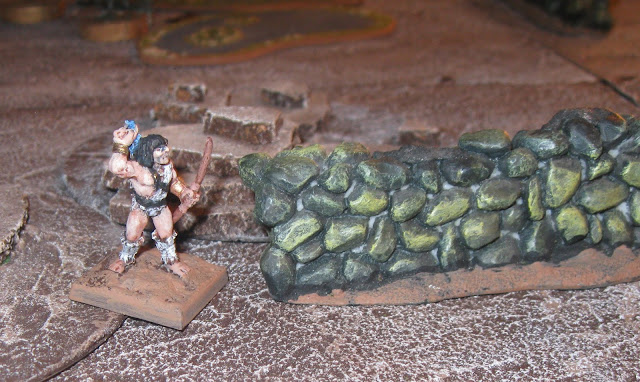 While the raider with the axe attempts to kill Richard, the other raider strings his short bow and tries to shoot Osrina and Letta. 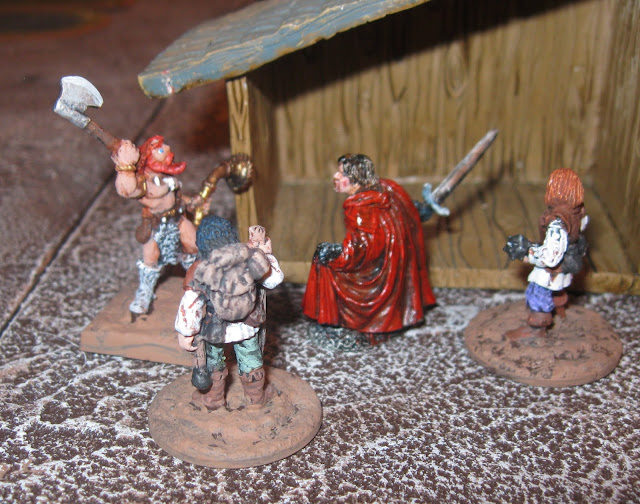 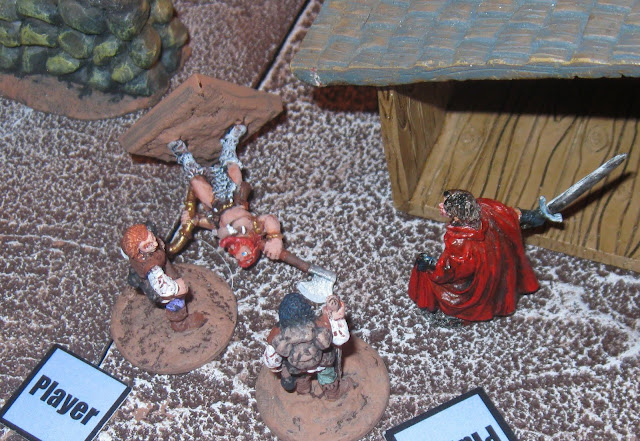 Osrina and then Letta come to Richard's aid.  Letta swings her mace with incredible force and brings the raider down. 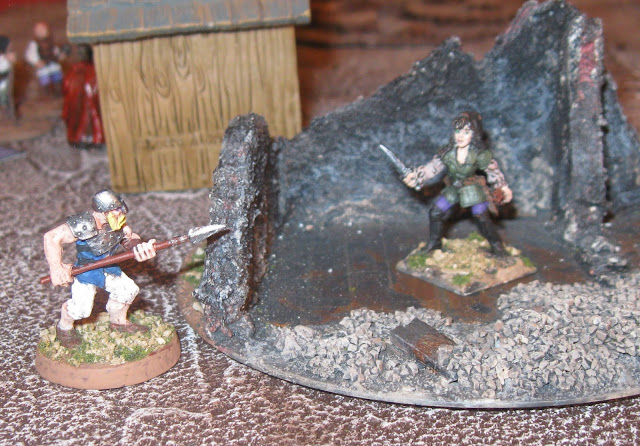 Meanwhile, Thorstein detects movement in the smoldering ruins of the house.  He creeps up to the smoke stained wall and peers inside, spear at the ready.  He sees a young girl, apparently a captive of the raiders, her hands and feet are securely bound.  He quickly frees her and gives her a brief drink from his waterskin.  He learns that her name is Tannis.  She is from this region, but not this homestead.  She tells Thorstein that there were many raiders and that she has seen them with other captives, though none that meet Baird's description.  Thorstein gives the girl his dagger, then tells her to hide in the cover of the deep woods while they search the area for more raiders.

(In this scenario the Event tokens may be captives, raiders, or raiders with captives.  The victory conditions include getting the captives off the party's board edge.  Also, the A.I. for activating Enemies has them sometimes prioritizing attacking the captives instead of the party.  During the earlier steps of the campaign turn I had already determined that the party will get a reinforcement, so when a token produced a captive I put Tannis on the board.  I had not read all the Captive rules or the scenario close enough, however, and made a mistake that this point.  I should have chosen between finding my missing person, or finding a different captive and rolling their circumstance.  There are multiple Event tokens that reveal finding captives, however, not all the tokens are used for the scenario, so I inadvertently set myself up for possibly not finding Baird.) 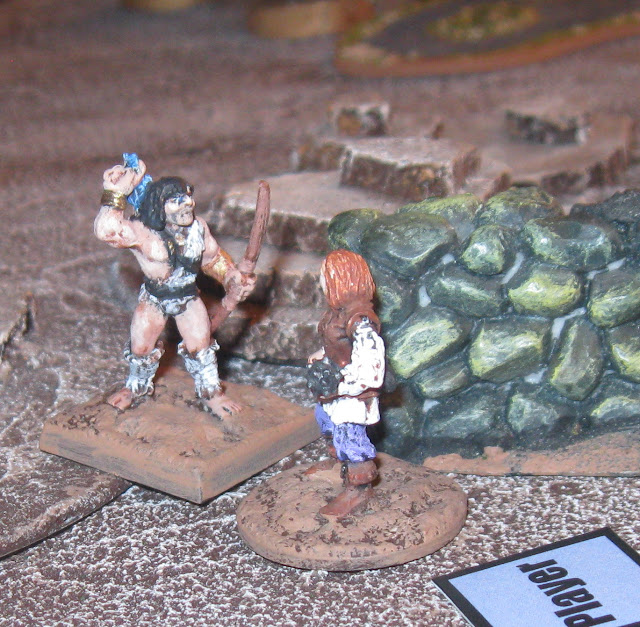 Letta sets off running towards the raider archer.  He takes a desperate shot attempting to stop her mad rush. 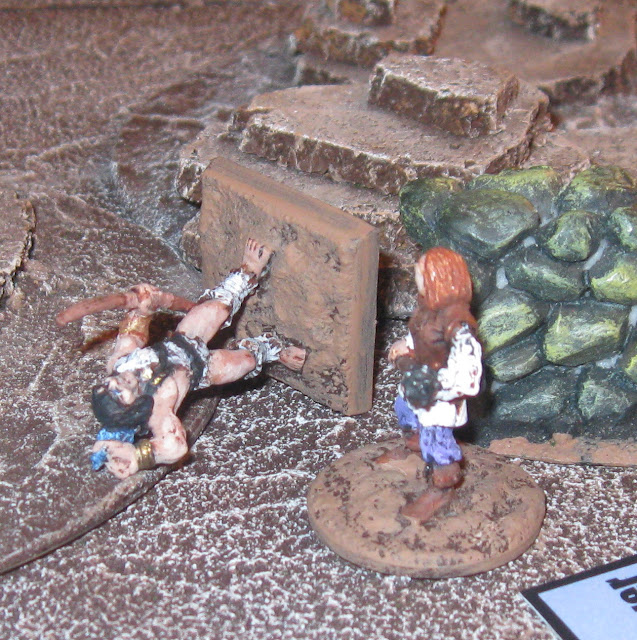 She uses her momentum to bring her mace crashing down, taking the raider out with a single blow.

(The Enemy Warband characters are more equivalent to a starting character, and so are not as tough as the Undead.)

Thorstein re-joins the group and introduces Tannis.  She tells Richard what she knows of the raiders;

"They often come down from the mountains and attack any nearby homesteads or caravans." she says.  "They seek anything of value, including any captives they can secure.  They ransom those of means, but the others become slaves, or might be sold for the pit fights."

Tannis is sent off to the woods where she can hide and rest while the others search for Baird and any other captives they can free.  Tannis stoops to pick up the short bow and quiver from the dead raider before she goes off towards the treeline. 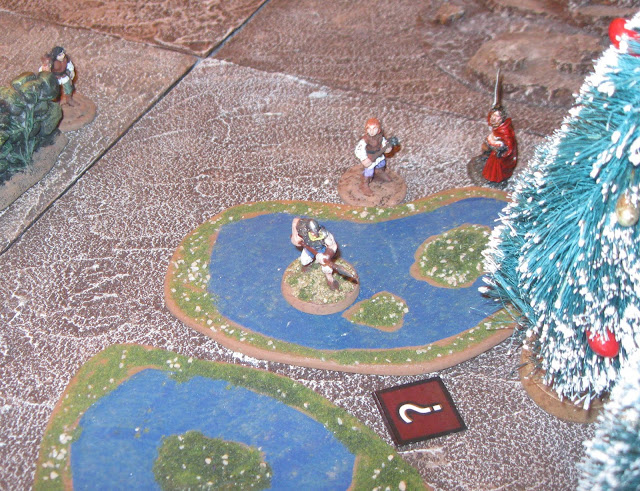 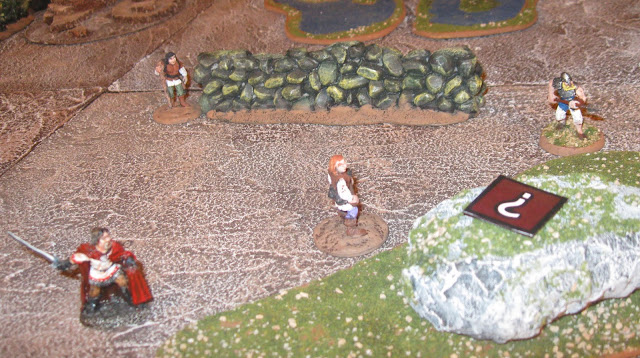 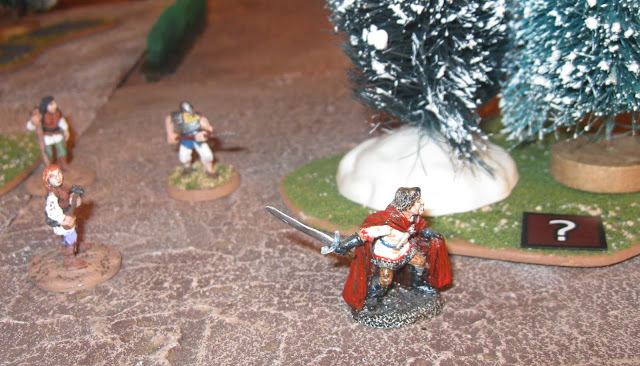 The party combs the valley, looking in any area that might provide cover or concealment for either enemy or captive.  They take turns taking the lead and approach each area with caution, prepared for trouble.  Soon they have covered the entire valley except for a rocky outcrop at the far end opposite the burnt homestead.

(Each of these Event tokens revealed nothing.  Most of the scenarios have several tokens that do not result in anything.  This might be a thing to change a bit once I am more comfortable with the rules.  Some of these Event tokens could have traps, minor hazards, or role playing elements that would not greatly effect the balance of the game.) 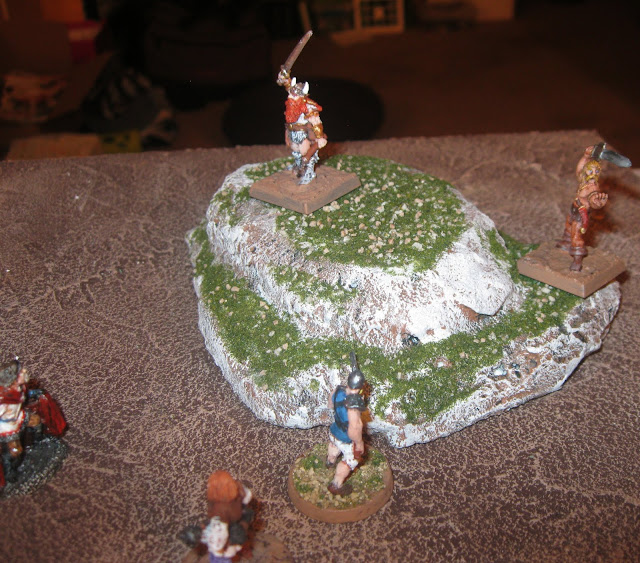 As the party approaches the outcropping two raiders step over the crest of and yell challenges and insults.   Thorstein rushes to fight the swordsman on the lower level, even so, the raider gains a height advantage on the Northman. 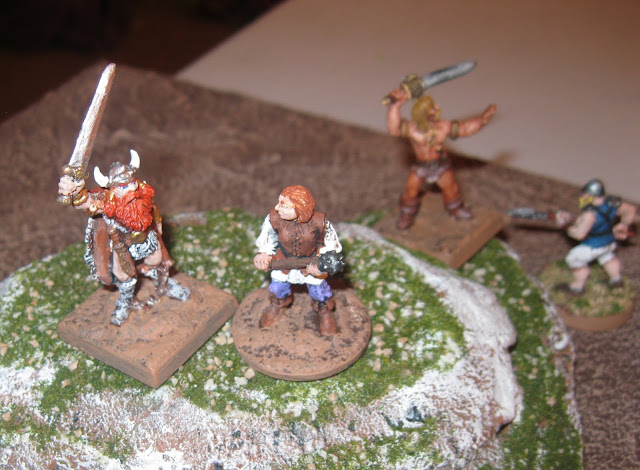 Letta charges right up the front slope of the rock, a treacherous scramble that brings her in contact with the other raider.  He swings at her, hoping to find her vulnerable from the climb, but she nimbly turns his blade aside with her mace. 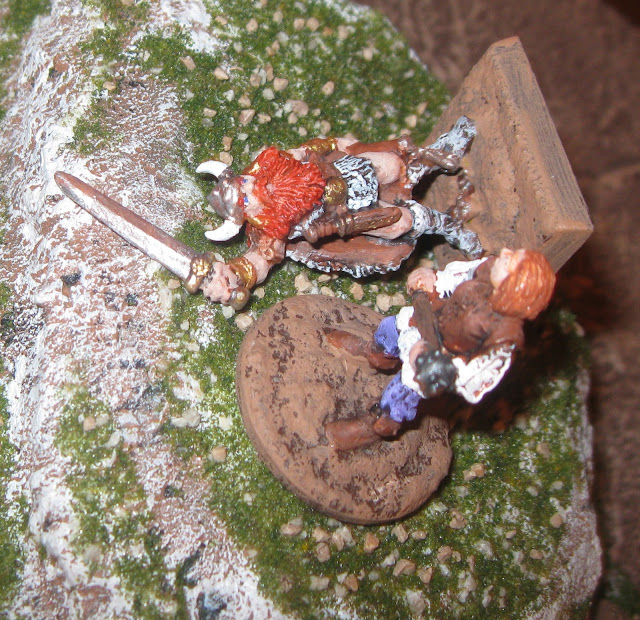 Then brings her mace crashing down on his head.  As she stoops to make sure he is down she notes Baird's dagger stuffed into his belt. 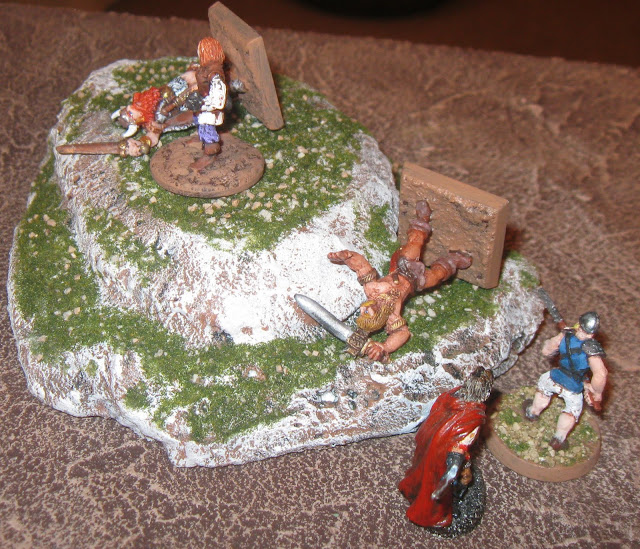 Meanwhile, Richard rushes to Thorstein's aid and the two of them together bring the raider down.

"Look, I found Baird's blade," says Letta, "but where could he be?"

They search around the outcropping and in any area that might hide a captive, or the corpse of one.  Richard's face becomes more and more anguished with every passing minute.

After they have combed the entire region Osrina turns to Richard and says, "He is not here.  He was, but is not now.  It will be getting dark soon, and there may be more raiders in the area.  We should seek the cover of the woods, we have done everything we could."  She pauses and swallows hard before continuing, "Baird is gone, we have no way to find him, now.  We must hope he is alive and hope we find him one day."

With reluctance, Richard slowly nods and leads the party back to the deep woods where awaits Tannis, the one captive they managed to free.

(So, the one Event token that I did not use, per the scenario set up, would have triggered enemies as well as captives.  So the randomness of the Event token placement really helped to create a bit of a scenario twist.  I think that overall Blood on the Blade rules do a good job of helping to create the narrative of the campaign.)
Posted by David at 10:06 PM