An account of the action at Riverbend summarized from excerpts taken from Lieutenant Morris's official report.

Lieutenant Morris was part of Captain Cather's expedition sent into the swamp lands near British mining interests with orders to investigate a series of attacks on local miners.  A recent attack had taken place at Garvin's Hole, and Cather's column attempted to traverse the main road to the mine.  It was, however, bogged down by mud and recent flooding.  The good Captain sent Lieutenant Morris on ahead with a small detachment in order to begin the investigation and protect the miners.  About halfway to the mine, Morris and his men detected Lizard warbands trailing them through the swamp.  As the Lizardmen got bolder and approached closer, the Lieutenant decided to set up a defensive position at a small bend in the river.  Sergeant Shank set up his massive, multi-barrel gatling gun on a rocky mound, whilst other soldiers took positions behind the roots of the giant foliage native to Venus.  Once Morris had his men in position the Lizard charged, as if on cue, rushing at the detachment from all sides.  The fighting was fierce, with the soldiers using their superior fire to do as much damage from range as possible.  Still, the Lizard bowmen managed to wound Sergeant Shank and sent others to take cover.  The gatling gun shot bursts at the charging Lizards, yet it's mechanism might have been fouled by the mud and humid conditions as it's fire was largely ineffectual.  Sergeant Shank and his assistant gunner quickly fell when the Lizards were among the defenses.  Private Tom was also slain by the Lizardmen, indeed all of the Lieutenant's detachment would surely have been slain if not for the timely arrival of Captain Cather's column, which drove the remaining Lizards off.  It is estimated that Morris and his men killed at least 8 of the Lizardmen, including the leader of one warband. 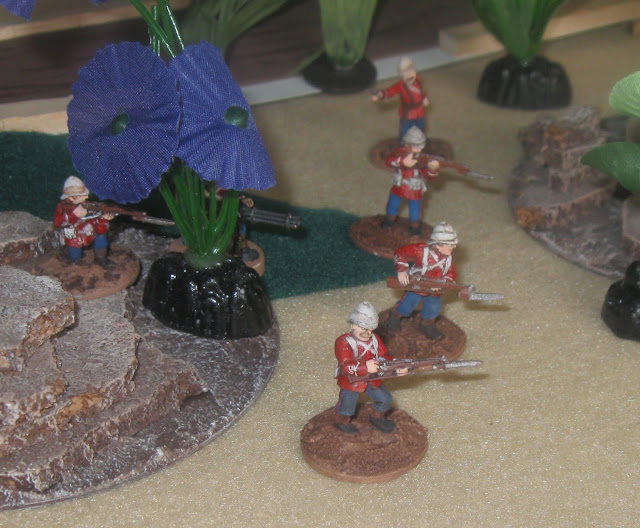 Lieutenant Morris directs his men to take a defensive position in a small bend with the river behind his back. 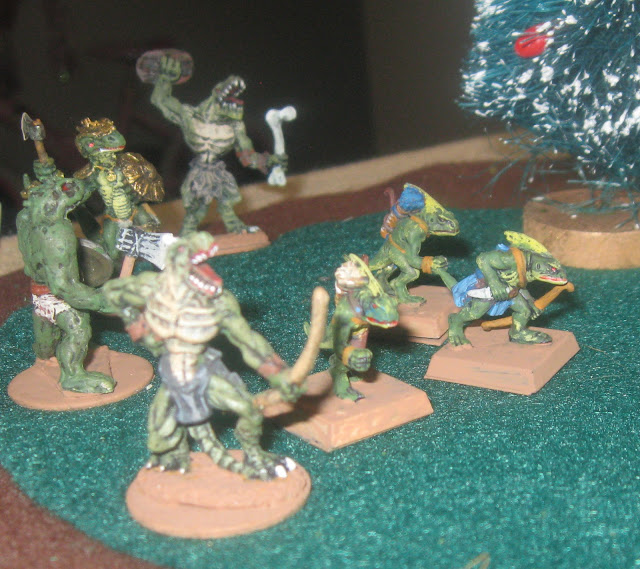 Skreelan, or Lizardmen warbands approach through the trees.

The younger Lizards take cover at the woods edge and prepare bows to fire on the British. 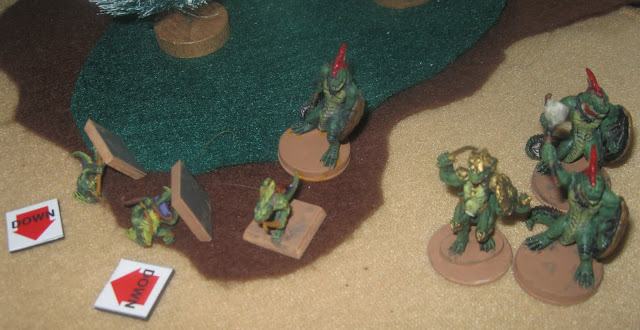 On the other flank British gunfire has already taken down 2 of the bowmen, but the older Lizards seem undeterred. 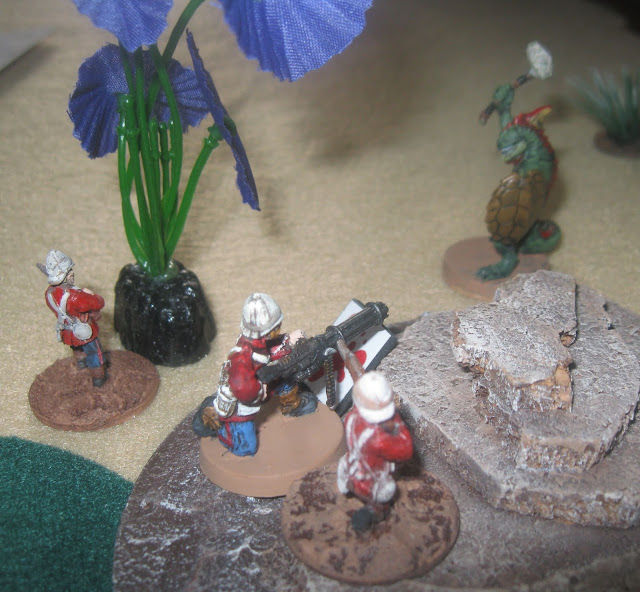 Sergeant Shank, wounded by a Lizard arrow, fires his gatling at the approaching Lizards. 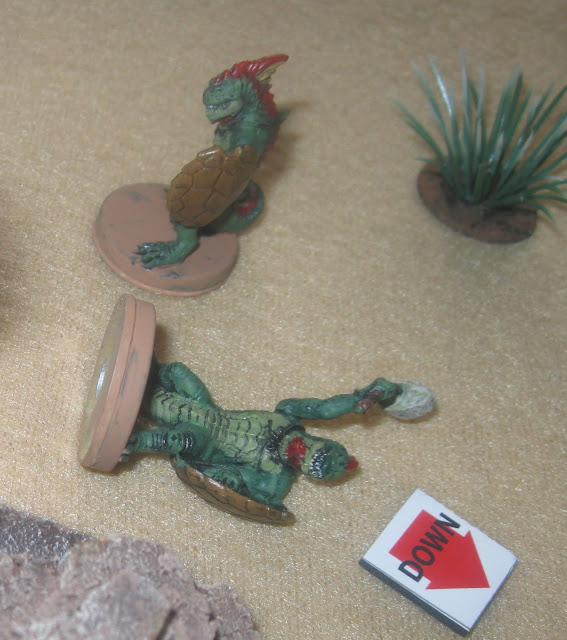 He puts some down, but others keep rushing in.

Across the river the Lizardmen rush straight into the water in a fury to get to the British. 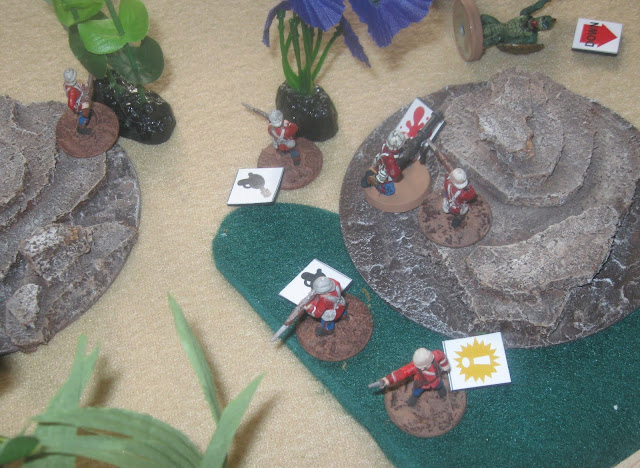 Lizardman arrows drive Lieutenant Morris back into the cover of the swam grass. 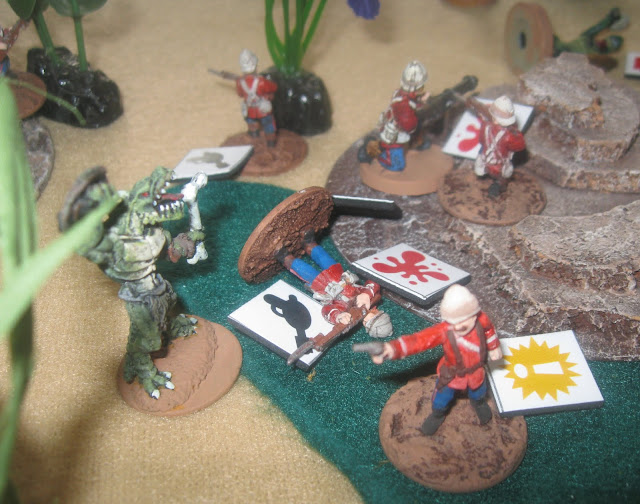 Private Tom is brutally slain by a charging Lizardman, as Lieutenant Morris looks on in horror. 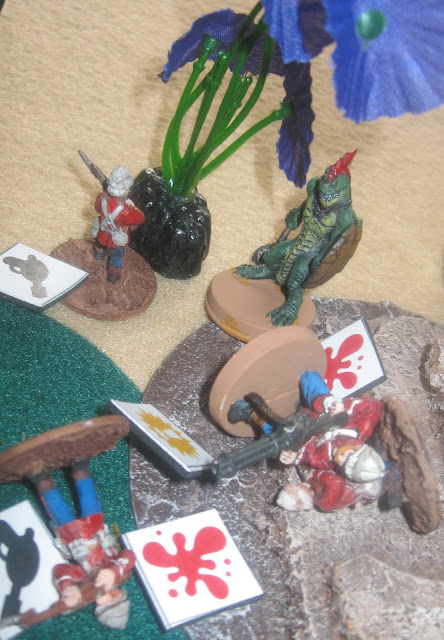 Sergeant Shank and his gunner are killed by a charging Lizard.  Private Dick soon exacts vengeance upon the beast. 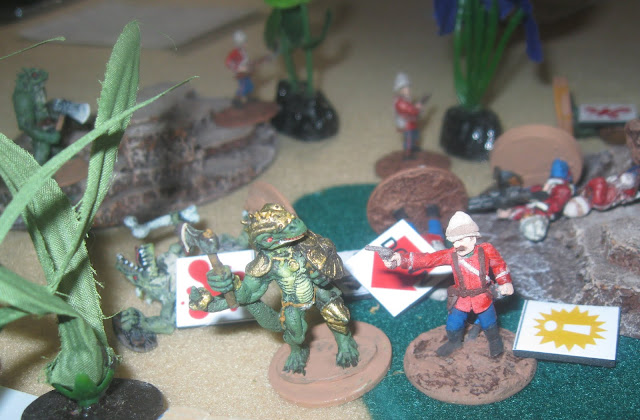 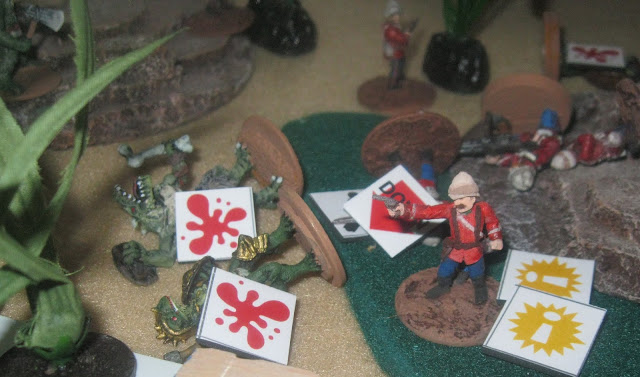 The brave officer draws his sword and sets to it,  deftly cutting the warlord down. 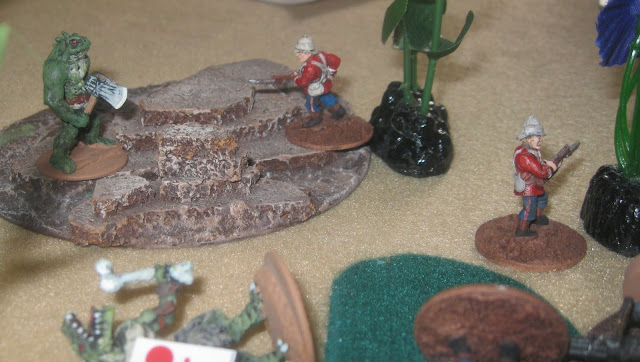 Private Harry hears a Lizardman climbing over the rocks behind him.   He turns to face the approaching beast just before it is upon him. 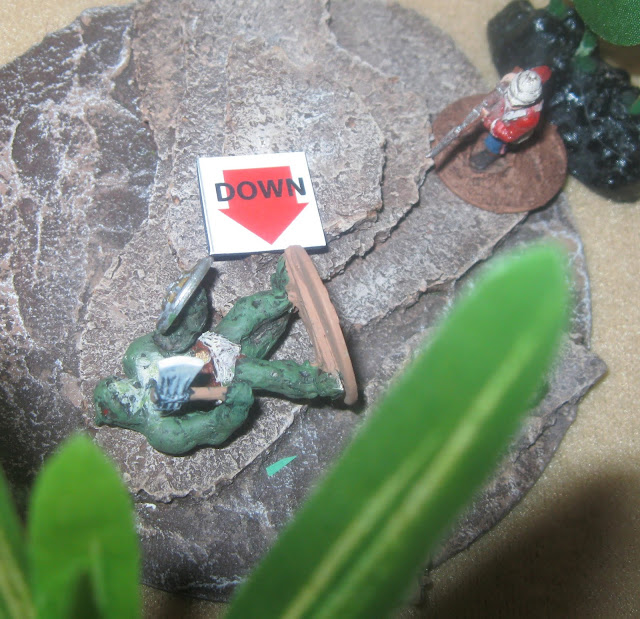 He takes careful aim as the Lizard raises it's ax and prepares to strike.  A single shot takes the Lizardman down. 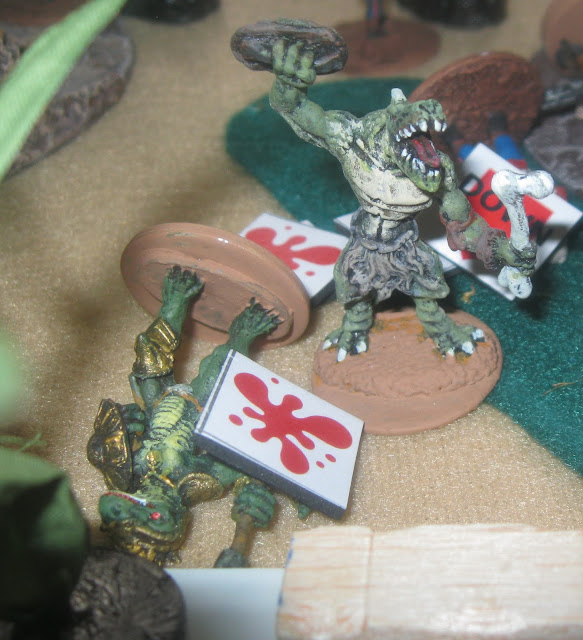 In the nick of time Captain Cather arrives with the relief column.  The remaining Lizardmen hiss their displeasure and then slink back into the swamp, leaving their dead and wounded behind.


Notes-  First off, this scenario, The Natives are Restless, comes from a free collection of scenarios for the Galactic Heroes version of Fistful of Lead.  I inserted British Colonials for Marines and Lizardmen for Natives without making any other changes, and I thought the game went very well played as Victorian sci fi.   I had heard a lot of good things about the Fistful of Lead rules, mainly the Western version.  I finally got a chance to play a few games this summer and really liked the simplicity of the rules and the ease with which they capture the Western flavor.  When the friend who introduced me to the rules told me about rules for other genres, I rushed out and picked up these versions of the rules as well.  It seems to me that the rules have enough flavor to avoid being generic feeling and still maintain a great sense of the genre being portrayed.  This game was my first foray into testing the rules out in a different genre.  For my next game we want to see how the rules work for a WWII skirmish.