D'aud was pleased with his warband.  They had met the enemy and faced them without flinching. They had even caused several injuries on the Christian warriors, even though, in the end, they had to quit the field of battle. Aban, the Sub-Arif was castigated, however, for fleeing from the Crusader Knight.  Jawar has a lingering injury that sometimes keeps him from his duties.  Also, Galib had carelessly lost his horse in the battle, and it was too costly to replace.  The warband had very few Livres left over after paying upkeep for all of their expenses.  D'aud had a solution, however, one that would also allow them to face their enemy yet again.  He marshaled his men into position, sending them to surround the Crusader camp site.  He reminded them that their objective was to raid the enemies' supplies, but encouraged them to take any opportunities to take out the Crusaders as well.

Sir Charles was uneasy.  His men had done well against the Saracen, particularly Marc with his deadly crossbow.  Several of his men sported injuries, however, including himself, and he again reprimanded himself for over extending.  If he had not chased the fleeing Saracen, he might have seen the Mamluk charging in from the flank.  Still, his men all survived and his warband had many Livres left over after paying their expenses.  The camp was filled with supplies that could further fund his warband and their crusade against the enemy.  Still, something troubled Sir Charles, perhaps intuition, or perhaps he saw some movement from the corner of his eye, or maybe it was even divine inspiration.  He called to his men and ordered them into a defensive position, then he waited to see if his inkling was right. 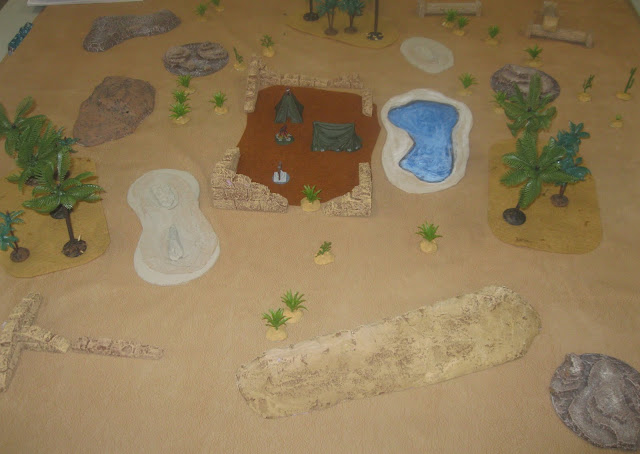 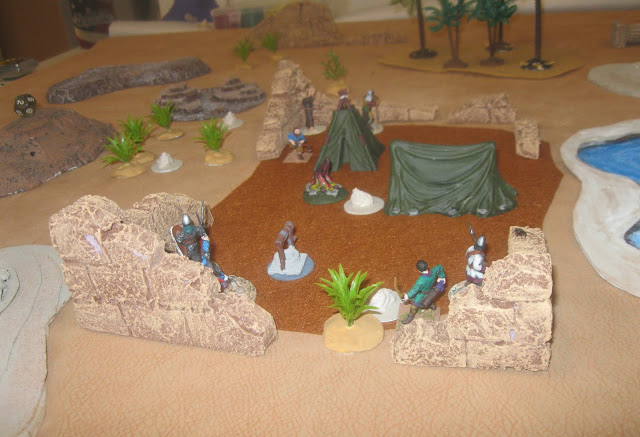 Sir Charles orders his men to take up a defensive position around the camp. 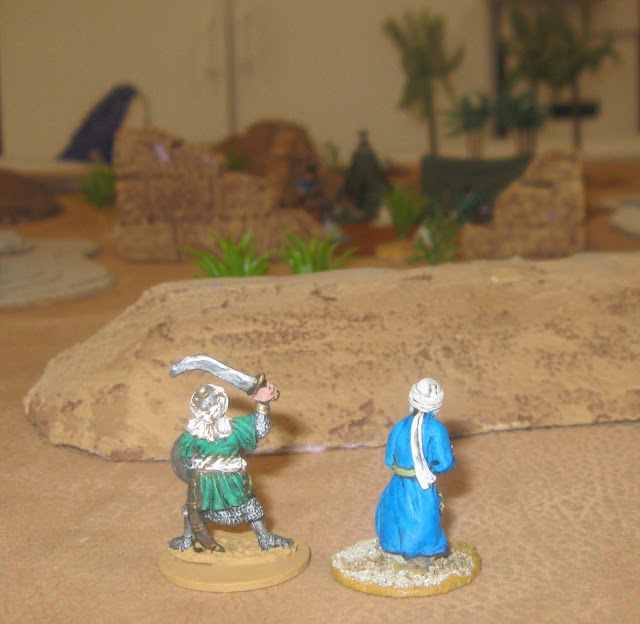 Aban and Mundir await the signal to attack, then they rush over the hill and run towards the Crusader camp.

As the enemy close in, Sir Charles and Squire Henri move out to defend the supplies. 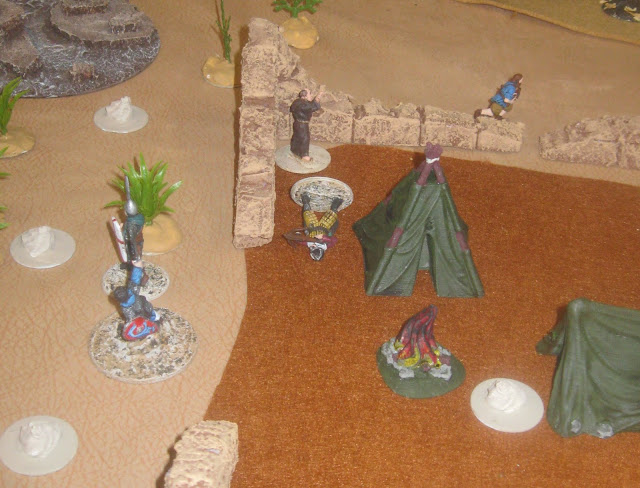 Marc, the crossbowman takes an arrow to the back and goes down.  Enzo rushes out to find the archer while Father Baptiste tries to take cover. 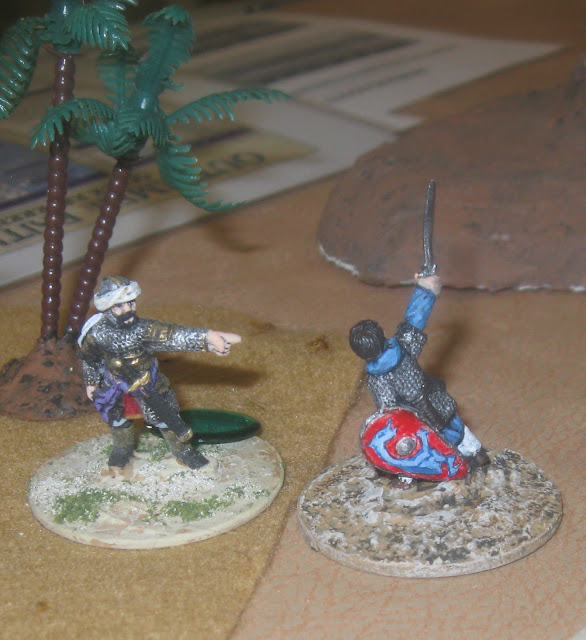 D'aud emerges at the edge of a palm grove, hunting bow at the ready.  Sir Charles boldly charges the Saracen leader, but comes up short. 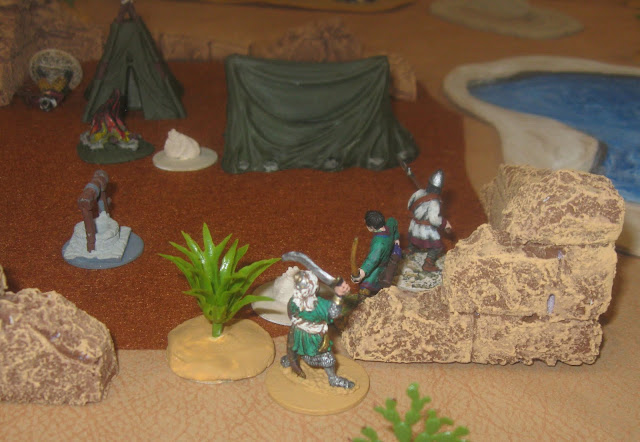 Aban charges Martin the Crusader archer and fights him over the ruined wall. 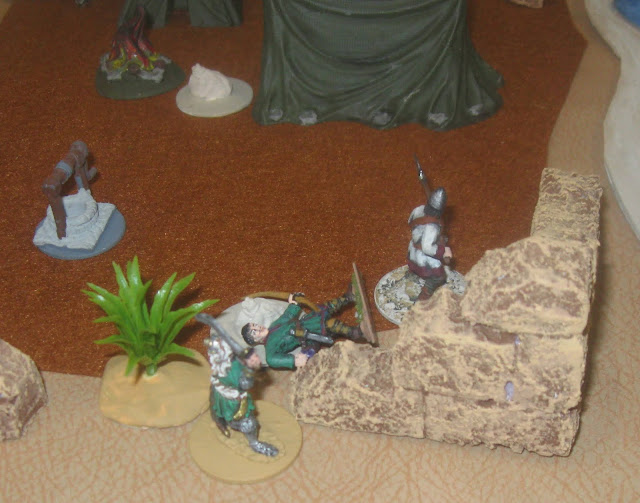 He cuts the archer down.

Muzna rushes past a Crusader with an ax, and ignores the well armed Squire.  Instead, he starts grabbing up supplies from the pile, hoping to dash away before the enemy can respond. 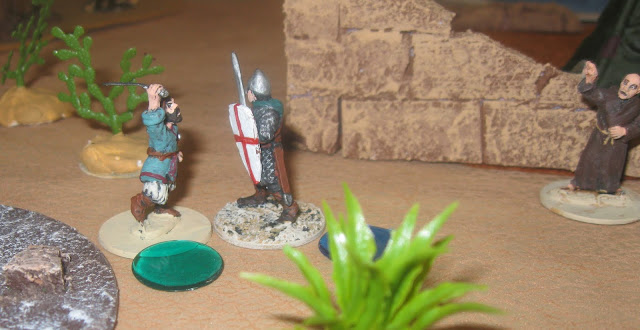 Squire Henri charges the Saracen, but neither warrior can get the upper hand and they remain locked in melee. 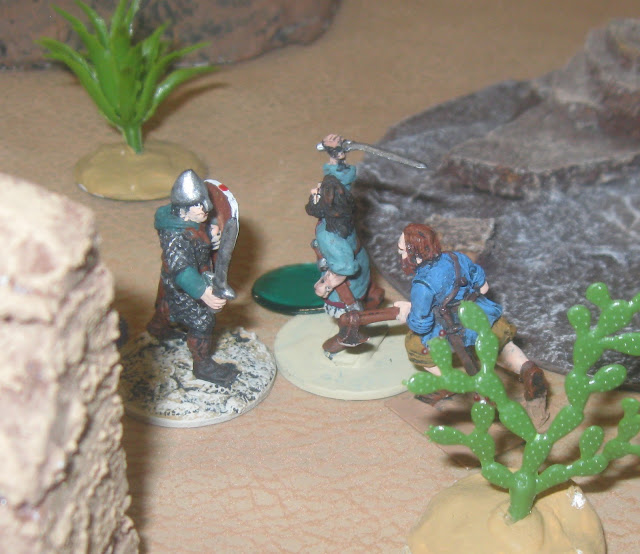 Enzo rushes to Henri's aid and swings his two-handed ax. 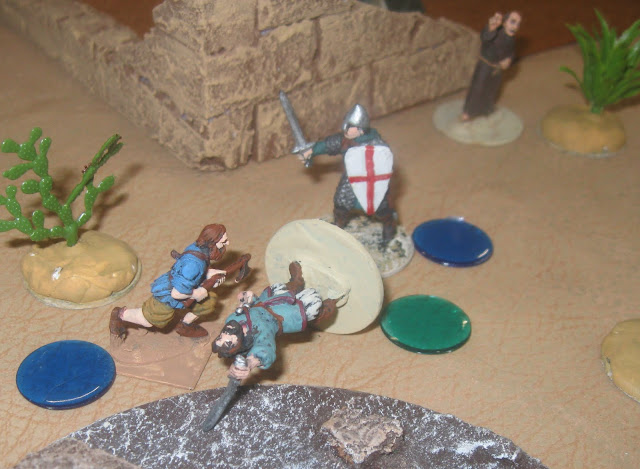 He takes Muzna down with a single blow. 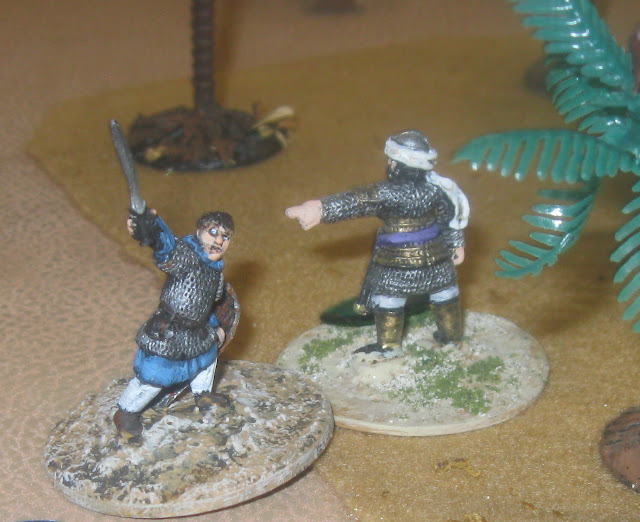 Sir Charles ignores the arrow in his arm, shot by the Saracen Arif, and he boldly charges in to attack.  He wounds D'aud, who then turns to flee. 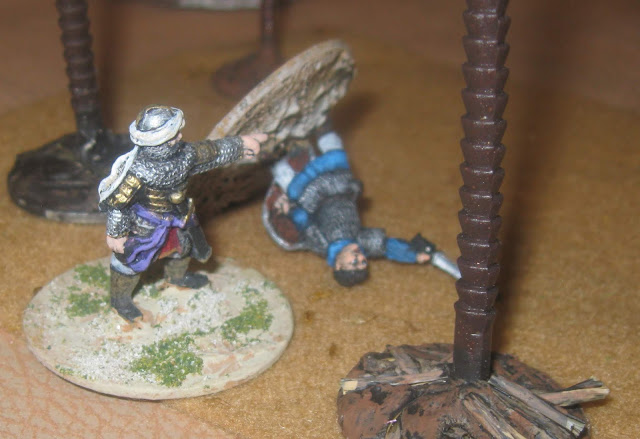 Sir Charles runs sure footed through the palm grove, pursing the Saracen leader.  They fight, sword against sword, but even panicked and wounded, the Saracen Swordsman gets the better of Sir Charles and takes him down. 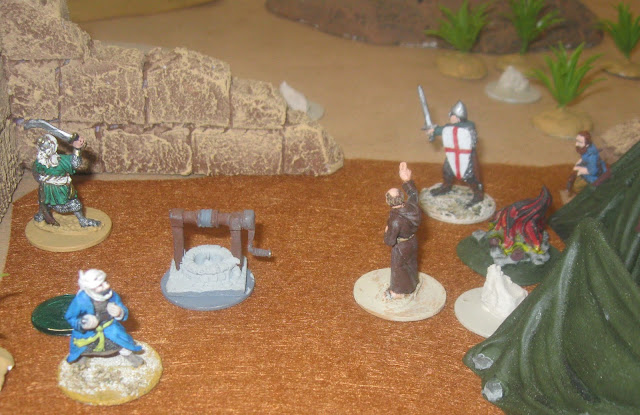 Mundir, heavy armor rattling as he runs into camp, joins Aban in grabbing supplies from the Crusader's cache.  Father Baptiste bravely interposes himself to protect a pile of supplies.  Henri and Enzo rush in to face the Saracen threat. 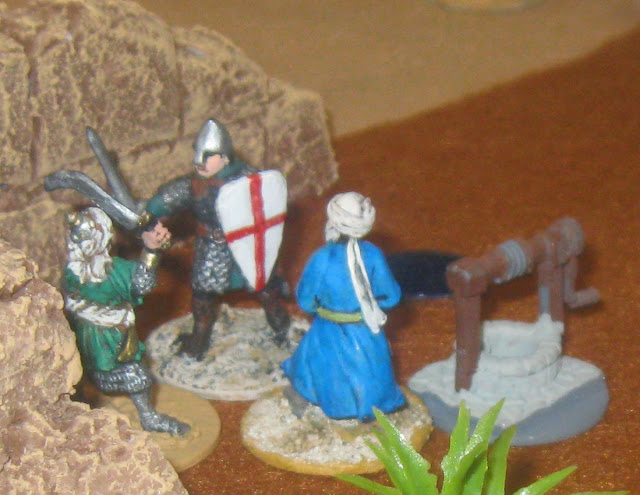 Squire Henri rushes in to fight Aban, but the two are equally matched.  Mundir rushes in, knife drawn. 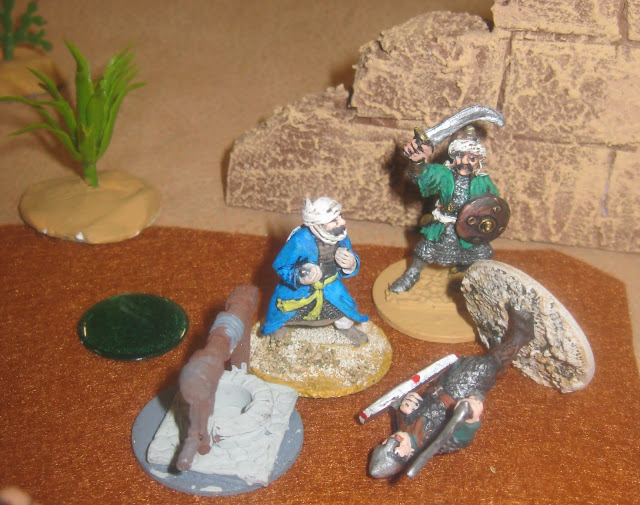 Mundir the knife fighter slips his slim blade past the armor and helm and shield protecting the squire, and ruthlessly takes him down. 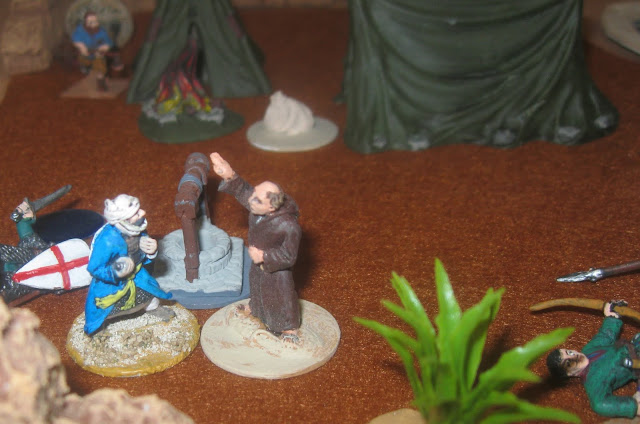 Father Baptist, enraged at seeing his fallen brethren, draws a dagger and rushes the Saracen. 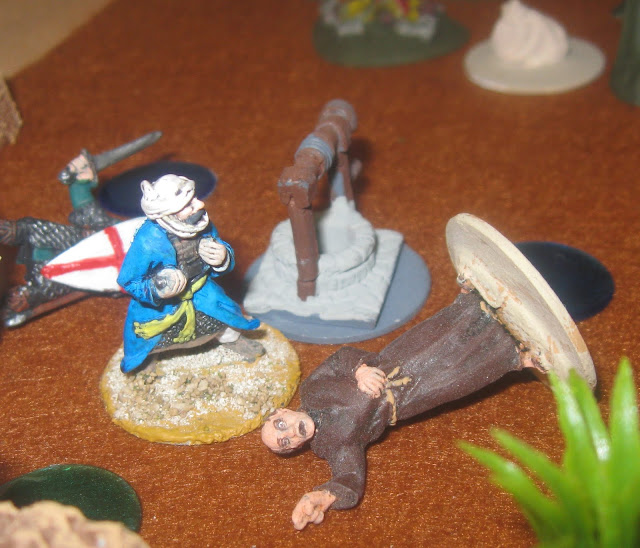 Mundir draws his sword and cuts the priest down. "Now for that cache of supplies," thinks the Saracen.  He rushes over and begins to collect the loot. 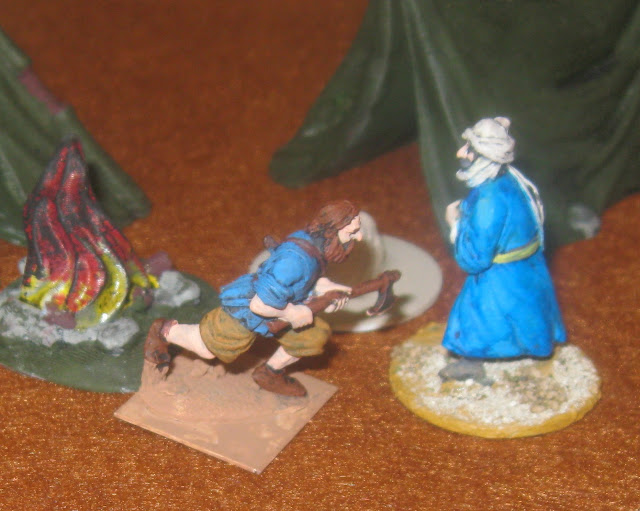 But Enzo rushes in with his two-handed ax, and Mundir has to abandon the supplies to defend himself. 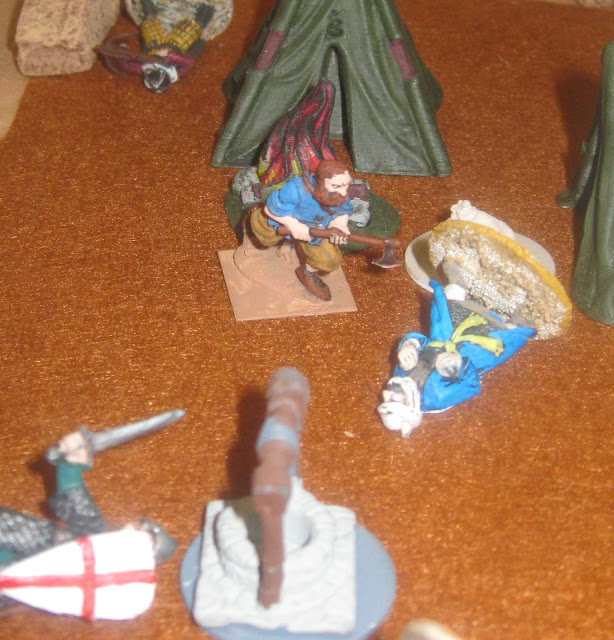 Enzo takes Mundir down and guards the cache.  He is the last Crusader left standing.  The Saracens, having successfully raided the supplies they were after, flee the battlefield with their hard won spoils of war.

After the battle each side treats their wounded.  Sir Charles suffered a wound to the arm that will impede his prowess with the sword.  Martin the archer suffers from conditions that require a steady dose of herbs as treatment.  Marc the crossbowman suffers an arm wound that prohibits him from using his weapon.  Sir Charles decides that Marc should be dismissed to go home to France and spread the word of the work the Crusaders are undertaking.  Finally, Father Baptiste suffered a wound to his eye, but he can still read the scriptures, so all is well.

In the Saracen camp, Mundir merely suffers from a flesh wound, he bandages it up himself.  Muzna, unhurt from the savage ax attack, reflects upon the battle and how he can become a better warrior like his leader.
Posted by David at 2:26 PM

Great write up! Glad you are enjoying Outremer, we are too. I am hoping we can get a full campaign going.