Blood in Space is a 1-2 player game following the exploits of a small crew of adventurers as they  traverse from planet to planet, explore derelict ships, or fight Imperial forces.  It uses the same game mechanics as Blood on the Blade, which you can find in previous posts on this blog.  The game has simple, yet interesting rules, several missions and enemies, and lots of options for campaign play.  The latter includes a nice flow chart that logically sets up what the crew's next adventure will be, a mechanism that strengthens the narrative flow of your overall story.  The new 2nd Edition of Blood in Space also incorporates a randomized star ship room cards with matching terrain tiles used for playing scenarios on space ships.  You can learn more here...http://zak965.it/studium/


Now, on with the story of the crew of the Free Trader Quixote..... 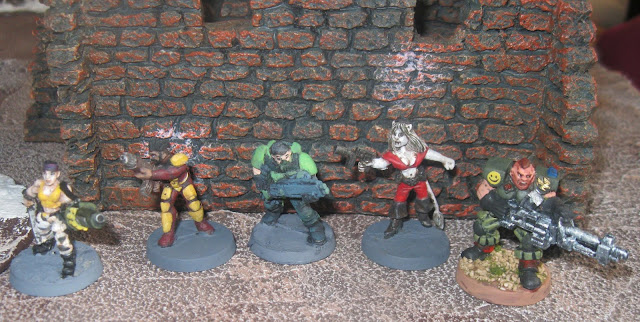 Crew of the  Quixote (L to R):
Captain Cortez-  reluctant leader of the crew, and also the ship's medic.  She is armed with a Laser Drill and a good old fashioned knife.
Maroon-  a good soldier and crewman who (for some reason) is abundantly pleased to be away from the main space lanes.  Maroon is armed with a Blaster Rifle.
Chuck-  Chuck is just Chuck.  He carries a shotgun and hopes one day to be an engineer.
"Princess" Katya- a Psyko with PSI powers.  Her LasGun has a stun option, in case she wants to play with her prey.
"Happy" Harrison-  lives up to his nickname, especially when he has something to point and fire his heavy blaster at.  When aboard ship between missions, however, Happy gets entirely too grumpy. 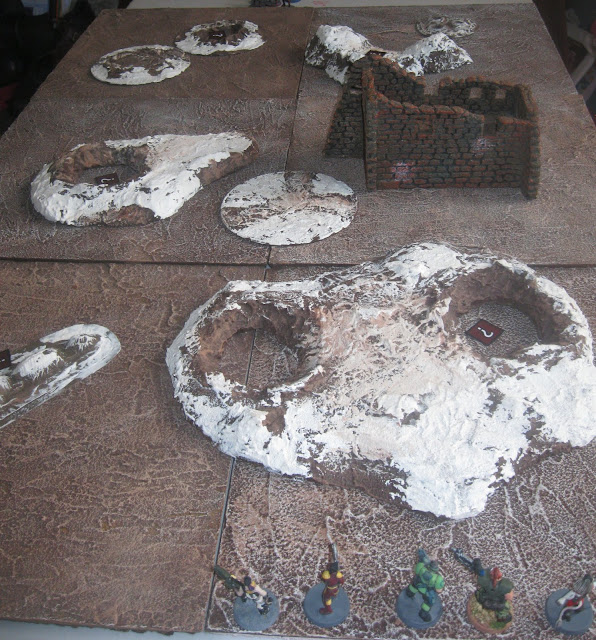 The crew has been hired to explore a snowy region on the planet Tellos-7.  This unaffiliated planet is sparsely populated, but it's locals believe that the planet once housed an advanced alien civilization. 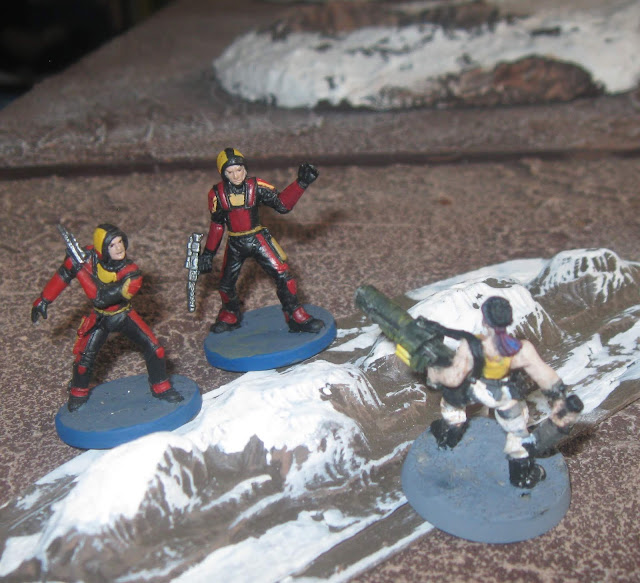 Cortez reads a blip on her scanner, but weather conditions foul up her readings.  She follows the signal to investigate and discovers 2 Imperial Soldiers.  Since Tellos-7 is not an Imperial planet, Cortez refuses to hand over her weapon and surrender to the soldiers. Unsurprisingly a batten ensues. 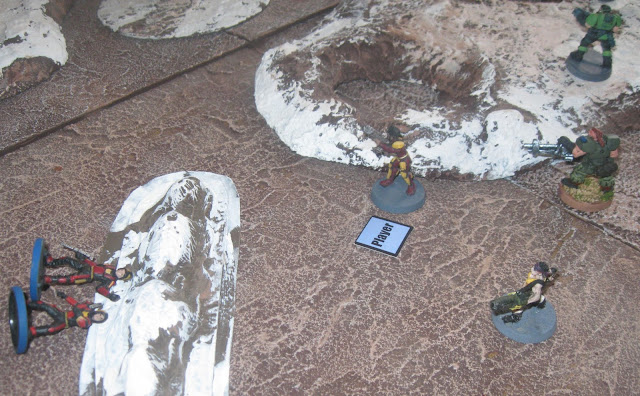 Cortez is injured in the fire fight, and falls back to treat her wounds.  Maroon and Happy step in to cover her.  With a barrage of fire, they take down the Imperial Soldiers. 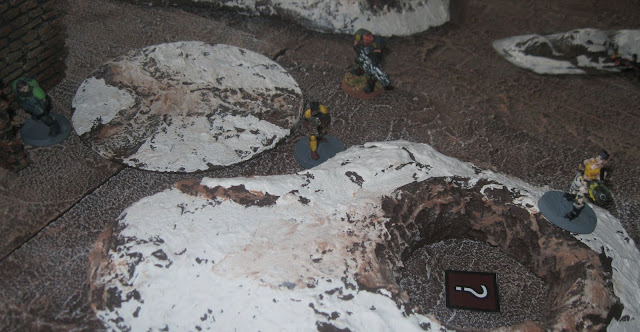 Fully recovered, Cortez continues to take point as the crew approaches another fouled signal on their scanners. 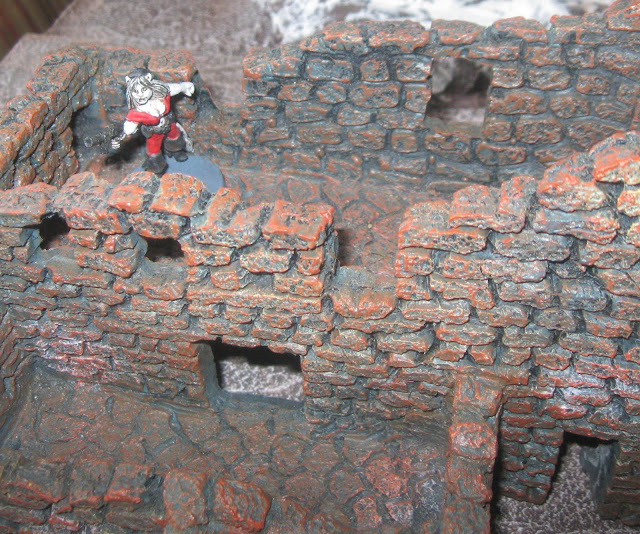 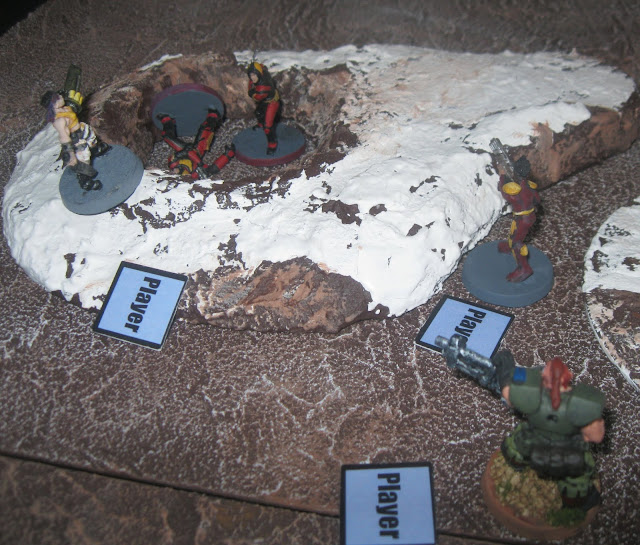 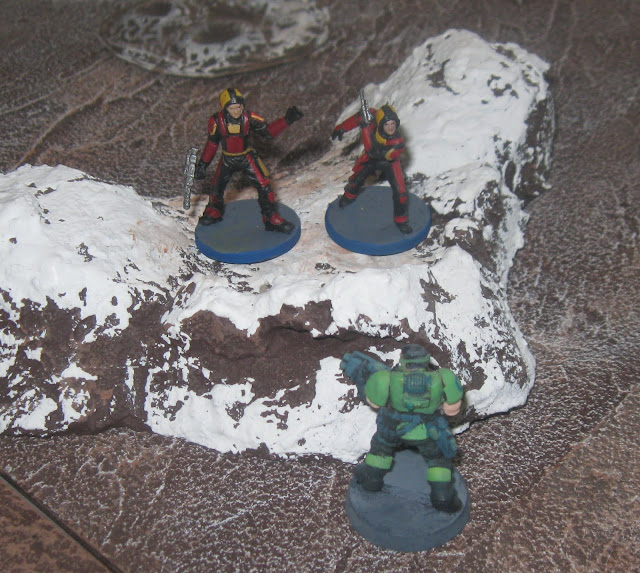 Chuck takes point following up another sensor reading, and leads the team to more Imperial Soldiers scanning the area.  What are the Imperials doing on Tellos-7?  What could they possibly be looking for?  These questions do not cross Chuck's mind.  Instead he thinks about where to point his shotgun so that he can get both targets in one shot.  He is successful in this task, even if the Imperial's armor withstands the shot. Eventually, the enemy is eliminated, but the crew of the Quixote still have no clue as to why the Imperials are here. 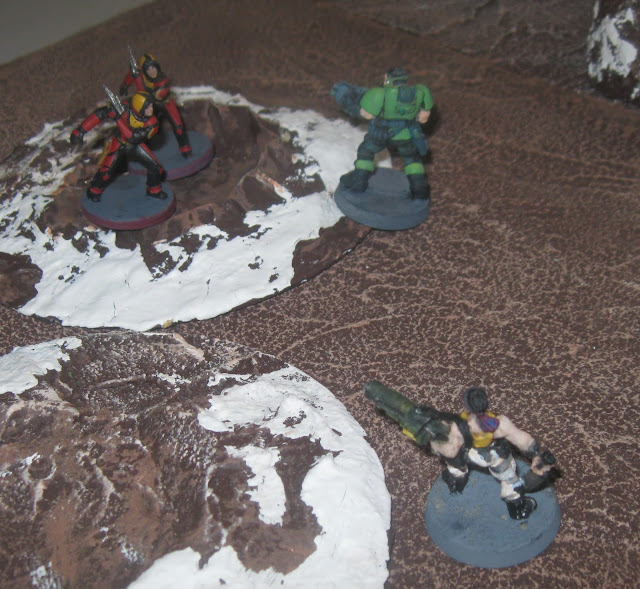 At the last spot on the frozen plain, Chuck discovers another pair of Imperial Soldiers.  This time, it appears that they were digging for something in the hard frosted ground. 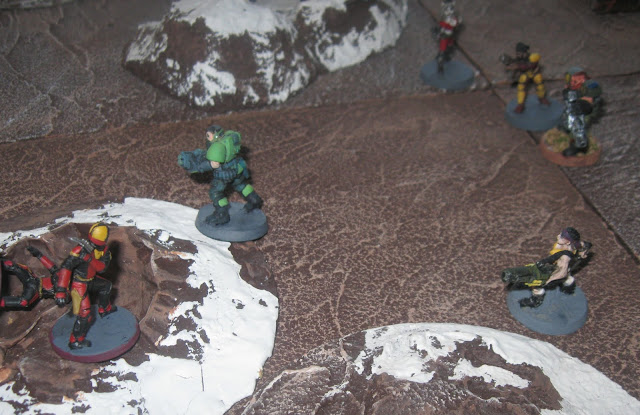 The Crew fans out and concentrates fire on the Imperials.  Princess attempts one of her PSI mind blasts, but only manages to give herself a head ache.  She nearly passes out from the effort, but fortunately the crew vanquishes the soldiers while she rests.  Investigating the site once the battle is done, Cortez discovers that the Imperials were digging up an alien artifact.  That means that their employer will want to send that kook of a Scientist down into the valley to search for more artifacts.  Cortez leads the way back to the ship where she will tend to Maroon's wound and prep her crew for the next mission.  This time they will be on the look out for more Imperials.

Next Mission-  Escort (Science)
Posted by David at 2:48 PM